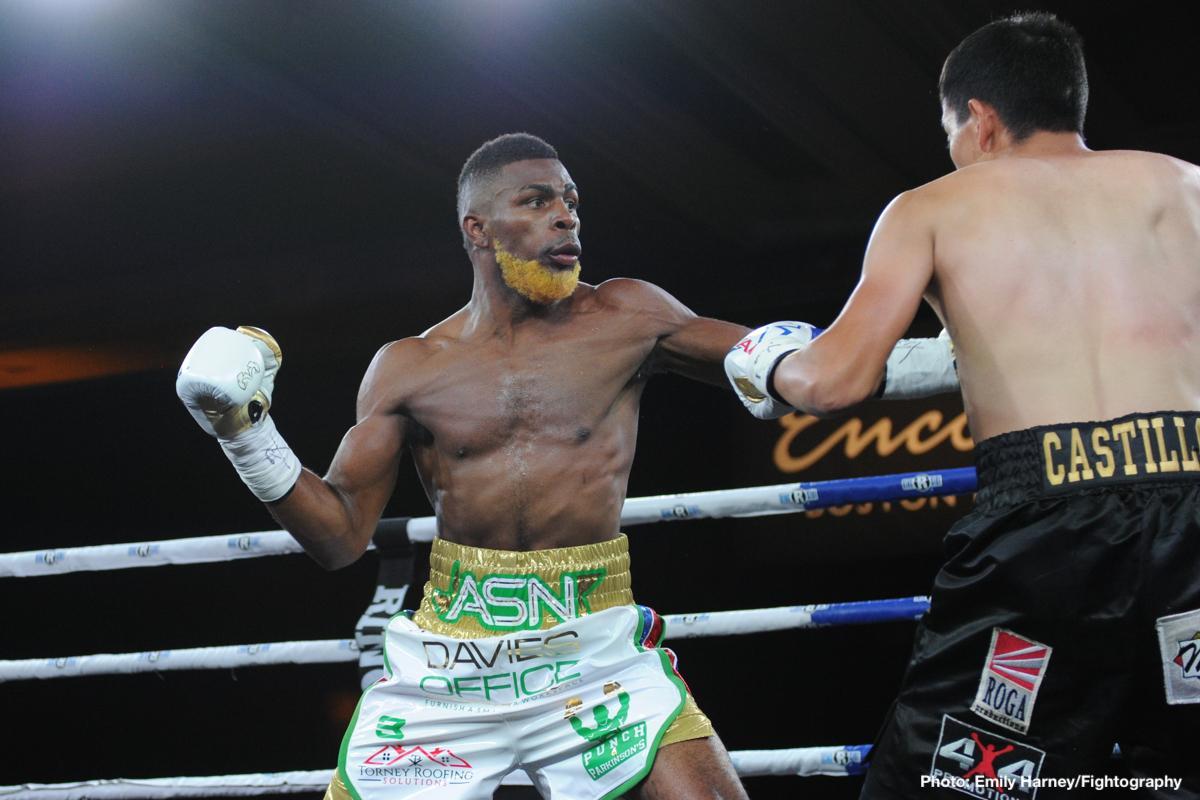 After a tentative first round that saw both fighters land combinations, with just seconds left in the opening stanza, Nova sent Castillo to the ropes with a hard jab and then dropped the Mexican fighter with a textbook jab and cross. Castillo was hurt badly and could not beat the ten count.

“It was much shorter fight than I expected but I don’t get paid for overtime so… I’m ok with it.”, laughed Nova, the flashy young contender who is now ranked #6 in the world by the WBA.

As for his thoughts on a title shot in the red hot division that includes champions like Gervonta Davis, Tevin Farmer and Andrew Cancio, ‘Super Nova’ who hails from Albany, New York was confident in his abilities to beat any of the current belt holders.

“As soon as I get the call, I’m ready. I’m not picking or calling out any of them, I just want a title shot. If I had to fight all of them at the same time to get a belt, I would. No matter which one I get, I will win a world championship next year.”

Nova’s promoter, Ken Casey is on board with his fighter’s plans for a title shot next year.

“We’re gonna have him fight in Belgium in December on the undercard of the WBA cruiserweight title fight. After that we want a title shot but if that doesn’t come at the start of the new year, we would go to Albany and do a show in his hometown. He deserves it and he has a huge fan base there. Then we should absolutely be in position to challenge for a world title.”

In the co-main event, Murphys Boxing’s Carlos Gongora (17-0, 13 KOs) stopped the usually durable Alan Zavala (15-4, 13 KOs) in the first round of a middleweight bout scheduled for 10 rounds. All it took was a 4 punch head shot combination that landed flush and the Mexican who fights out of San Diego hit the canvas and was unable to beat the count. Gongora, a former Olympian from Ecuador, entered the world rankings at #15 in the WBA last month and after the surprisingly quick knockout is looking to stay on the fast track and return to the ring again this fall.

In other action on the card…

New York welterweight prospect, Brian Ceballo (10-0, 5 KOs) kept his undefeated streak intact against Luis Edward Flores (24-14, 20 KOs) by landing a brutal body shot in the fourth round of a scheduled 8 round bout that left the veteran fighter withering in pain on the canvas.

Popular local prospect Khiry Todd (9-1, 7 KOs) dropped and stopped Alex Duarte (14-8-1, 11 KOs) in the first round of a scheduled 6 round welterweight bout. Todd, who hails from nearby Lynn, Massachusetts, is one of the best fighters out of the exciting New England welterweight picture. Locally the division is home to the likes of promising young fighters like James Perella, Anthony Velazquez, Mike Ohan Jr., Joe Farina, Derrick Whitley Jr., Brandon Higgins and more who together would make for an amazing regional tournament in 2020.

One of those previously mentioned welterweights, and the busiest of the bunch, former amateur standout, James Perella (5-0, 4 KOs) stopped Jose Aubel (8-6, 7 KOs) in the fourth round of a scheduled 4 round welterweight bout. It was Perella’s 5th victory in just 5 months as a professional. Up against a bizarre height disadvantage, the game fighter from Argentina tried hard but could not get inside Perella’s massive height and reach advantage. Aubel’s corner complained vehemently to officials after the stoppage, rightly claiming it was a behind the head blow that caused the final knockdown but that didn’t take away the fact Perella dominated every second of the fight. The lanky southpaw from nearby Mansfield continues to build a following of supportive fans and has shown considerable improvement in each of his five fights.

The night was rounded out by 5 different fighters making their pro debuts, 4 of them against each other, in fan friendly battles that proved Boston is knee deep in a boxing resurgence that has seen fighters enter the pro ranks on virtually every card held in the city this year.

Medford, Massachusetts’ Greg Bono (0-1) brought out a massive crowd to see the Fu Manchu mustached brawler lose an incredibly close 4 round unanimous decision to Brian Urday (1-0) who hails from Brockton, Massachusetts. The junior middleweight slugfest had the crowd on it’s feet for the entire fight and most in attendance felt it was a clear draw.

Decorated amateur, Jonathan Depina (1-0, 1 KO), who hails from Boston, stopped Michigan’s Robbie Thomas (0-2) in the 4th round of a scheduled 4 round bout in the lightweight division. Thomas proved to be a tough opponent for a debut fighter to face but Depina’s superior speed ultimately proved the difference and he forced the referee to step in to stop the fight after throwing a barrage of punches that a tiredThomas had no answer for.

In the opening attraction, Boston’s Aaron Trecell Smith (0-0-1) and Stoneham, Massachusetts’ James Perkins (0-0-1) fought to a majority draw in an crowd pleasing back and forth 4 round cruiserweight slug fest that left both fighters exhausted but all smiles after the fight.

On the ever important musical note, in a night that saw ring walk tunes range from self help spoken word to 80s hair metal to Brazilian techno to a live rapper, special kudos to Smith who came out to “Iko, Iko” by the late Dr. John. Smith, who originally hails from Louisiana, wanted to pay tribute to the musical legend who recently passed away.

It was a classy soundtrack to kick off another amazing night of Murphys Boxing at Encore Boston Harbor, easily the best new venue for boxing in the entire country and Murphys Boxing founder, Ken Casey is already in talks for another event at the resort casino later this year.

“Encore is just an incredible venue and the fans love coming here. We’ve already had two incredible shows here in the past month. We’re gonna come back at the end of the year, in late November or early December, for a massive card that we will be announcing soon.”