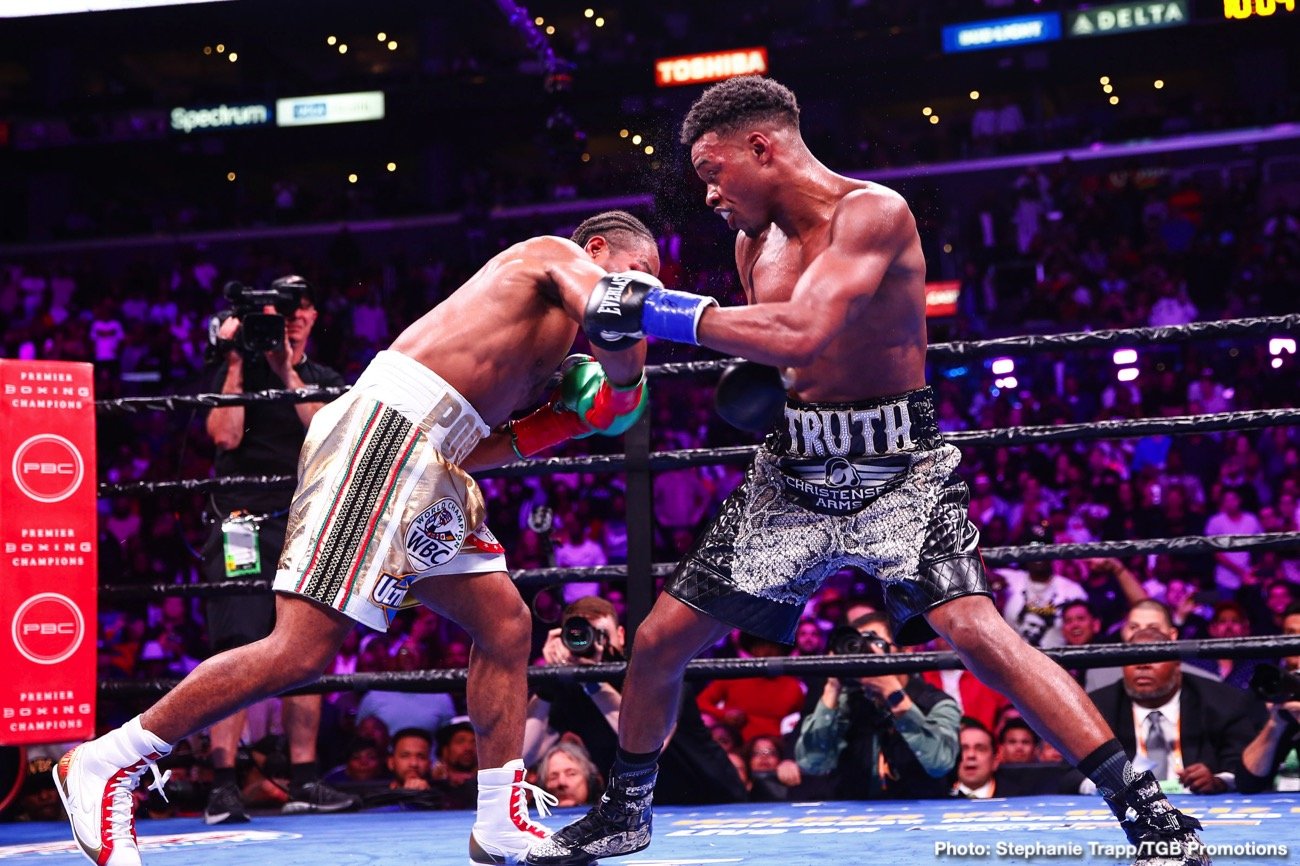 LAS VEGAS (April 17, 2020) – Building off of Wednesday’s appearance by former heavyweight champion Deontay Wilder on the PBC Podcast, a lineup featuring some of PBC’s top heavyweights will be highlighted on PBC’s social media platforms next week as fighters continue to engage with fans during social distancing.

Exciting heavyweights and former title challengers Chris Arreola and Dominic Breazeale will appear on the PBC Podcast with hosts Kenneth Bouhairie and Michael Rosenthal. The Podcast will be available on Wednesday, April 22 on the PBC website, iTunes, Spotify, Soundcloud, Stitcher, Spreaker and other outlets.

Unbeaten heavyweight sensation Efe Ajagba will appear on “Going The Distance” on the PBC YouTube page on Thursday, April 23. Ajagba will be breaking down his fight against Iago Kiladze at 4 p.m. ET/1 p.m. PT.

In addition, “PBC Replay” will feature a replay of the full televised card for the first Deontay Wilder vs. Luis Ortiz showdown on the PBC YouTube page on Saturday, April 25 at 8 p.m. E/5 p.m. PT.

This week’s schedule is again loaded with some of PBC’s top attractions sharing their insights and life during these challenging times. Stay tuned. There’s more to come.

Premier Boxing Champions boxers are dealing with the same issues with social distancing as the rest of the world. They want to reach out to fans during these challenging times, shares their experiences and talk boxing.

The PBC social media and digital team will present five opportunities per week for fans to engage with boxers and chat in a forum. Through these engagements fans will get the chance to hear from boxers about some of their past fights and their in-the-ring plans once the current restrictions are lifted; see how boxers are entertaining themselves and their families; step into their kitchens and watch them whip up some of their favorite foods and learn about some of their favorite movies, music, books, hobbies and hidden talents.

“Time Out With Ray Flores’’ Each Monday, Ray Flores will host a 30-45 minute live stream interview on the PBC Instagram page with a different fighter. This week unified Welterweight Champion Errol Spence, Jr. will appear with Flores this Monday, April 6 at 3 p.m. ET/12 p.m. PT.

“PBC Podcast” Each week Kenneth Bouhairie and Michael Rosenthal will interview a PBC boxer, catching up with them about how they’re coping with being quarantined and their future plans. Former two-division champion Danny Garcia and former three-division champion Abner Mares will appear this week. The Podcast is available each Wednesday on the PBC website, iTunes, Spotify, Soundcloud, Stitcher, Spreaker and other outlets.

“At Home With…” Each Wednesday and Friday, a fighter will take over the PBC Facebook page to host a live “hangout” from their homes. Fighters will be asked to share something topical, while also answering fan questions and maintaining a casual format. WBC Middleweight Champion Jermall Charlo will appear this Wednesday, April 8 at 4 p.m. ET. His twin brother, WBC Super Welterweight Champion Jermell Charlo, will appear on Friday, April 10 at 4 p.m. ET.

“Going The Distance’’ Each Thursday on the PBC YouTube page, select boxers will offer commentary over one of their best fights. IBF Super Middleweight Champion Caleb Plant will break down his title fight against Jose Uzcategui this Thursday, April 9 at 4 p.m. ET.

Every Saturday night “PBC Replay” will air an entire classic fight card from the PBC library on the PBC YouTube page. The welterweight unification showdown between Errol Spence, Jr. and Shawn Porter will replay this Saturday night at 8 p.m. ET.