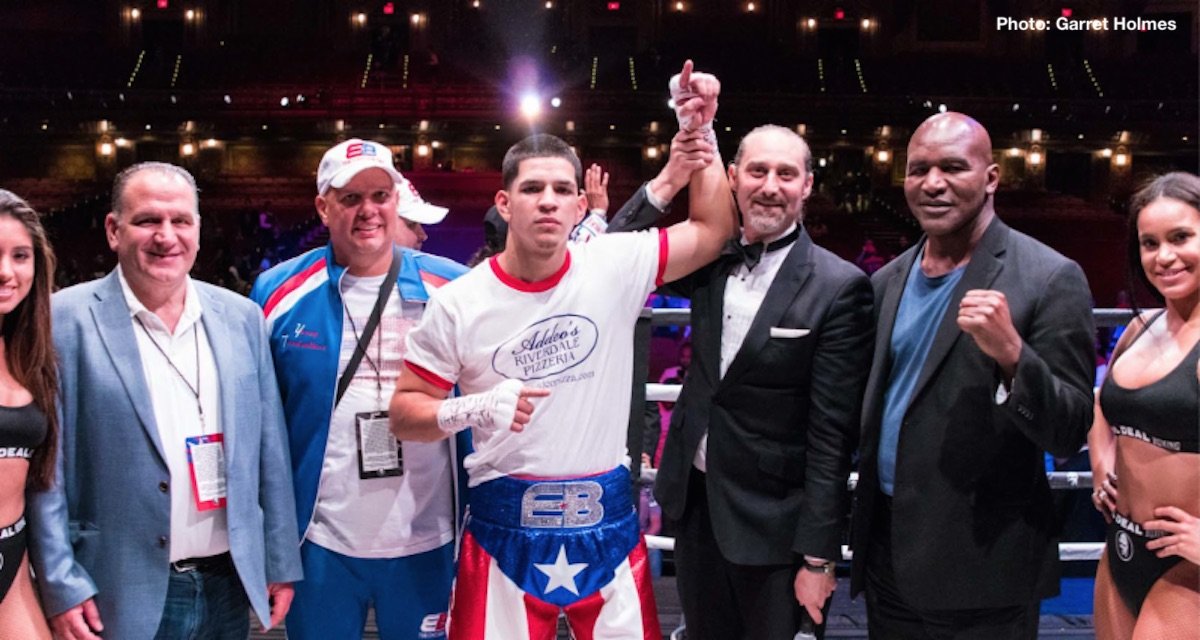 It was an absolutely rocking night at The Real Deal Boxing’s Puerto Rican Day Parade Showcase as a near capacity crowd in Brooklyn watched hometown hero, Edgar Berlanga (8-0, 8 KO), continue his Tyson-esque first round knockout streak with another brutal KO this time over Mexican veteran, Aaron Garcia (16-9-1, 11 KO).

A little over one minute into the action Berlanga caught Garcia with a massive straight right and a follow up left hook sending Garcia onto the canvas hard. Barely making the count, Berlanga went back to work on Garcia landing flush shots as the referee jumped in to stop the fight.

Berlanga, at only 21 years old, is building a legitimate fan base in New York’s Puerto Rican community and looks to stay busy with plans for another hometown fight this summer.

“It was an honor to fight in a main event on Puerto Rican Day Parade Weekend. I wanna dedicate this victory to Puerto Rico.”, said Berlanga immediately after the fight.

“I was hoping for some more rounds out this time but the knockout was there. I feel very blessed to be here tonight. It was honor to be in front of all my friends and family. Can’t wait to get in there and do it again. I’m not letting anything go to my head. I just want to stay focused and keep improving.”

In the co-main event, Ghana’s Duke Micah (22-0, 18 KO) outworked Washington, DC.’s Thomas Snow (19-4, 12 KO) in a 10 round bout retaining his WBC International Bantamweight Championship in a split decision and putting himself in line for a title shot.

Never at a loss for words or confidence, “The Baby Faced Terminator” literally called out all the current champions in the bantamweight division.

“I want any of the champs. I’m ready. I will fight them anytime, anywhere. Now is my time. I challenge them all.”, says Micah who is ranked #4 in the WBO.

Canelo Alvarez 7-0 against the Brits

Ohio’s Deandre Ware (12-0-2, 8 KO) and Puerto Rico’s Enrique Collazo (11-1-1, 9 KO) fought a bout as even as their records were going in. One judge saw it dead even at 76-76 but was overruled 77-75 in favor of Ware, a firefighter by day who now has taken an Olympian’s O to the disappointment of the partisan Puerto Rican crowd.

Matthew Gonzalez (6-0, 4 KO) scored a TKO over Jimmy Rosario (3-7, 2 KO) who failed to answer the bell for the 4th and final round of a welterweight contest.

Puerto Rican native Carlos Vidal (13-0, 12 KO) looked impressive against Esteban Aquino (12-5, 7 KO) stopping him in the 3rd of a scheduled 8 round featherweight bout.

The Fighting Frenchmen who now claims Brooklyn home, Frederic Julan (10-0, 8 KO) struggled in the first round with Eric Abraham (3-3) but as soon as he caught the game Abraham in the second round he ended things with several unanswered punches in a bout scheduled for 6.

The night kicked off with an exciting bantamweight upset as Oxnard’s Erik Ruiz (17-7-1, 7 KO), stopped Mario Diaz (17-2, 7 KO) with only 22 seconds left in the 8th and final round. Ruiz, who has been in the ring with several world champions, proved how dangerous a veteran can be even with only seconds left in a fight.

It was a festive environment on the eve of The Puerto Rican Day Parade that saw Evander Holyfield ringside taking in all the action.

“Edgar Berlanga has that something special that you always look for as a promoter”, explained the only 4 time heavyweight champion of the world.

“We believe he is one of finest young prospects in the United States. His fan base keeps growing with every knockout. We think he can be massive star in the sport and it’s going to be a lot of fun watching him develop.”

After back to back weekend shows, The Real Deal Boxing is putting the touches on several shows to be announced for this summer and fall including the highly anticipated Round 2 of the WBC Jose Sulaiman Invitational Welterweight Tournament which will see Chris van Herdeen vs. Fredrick Lawson and Francisco Santana vs Brad Solomon in the semi finals. Exact date and location will be announced later this month.