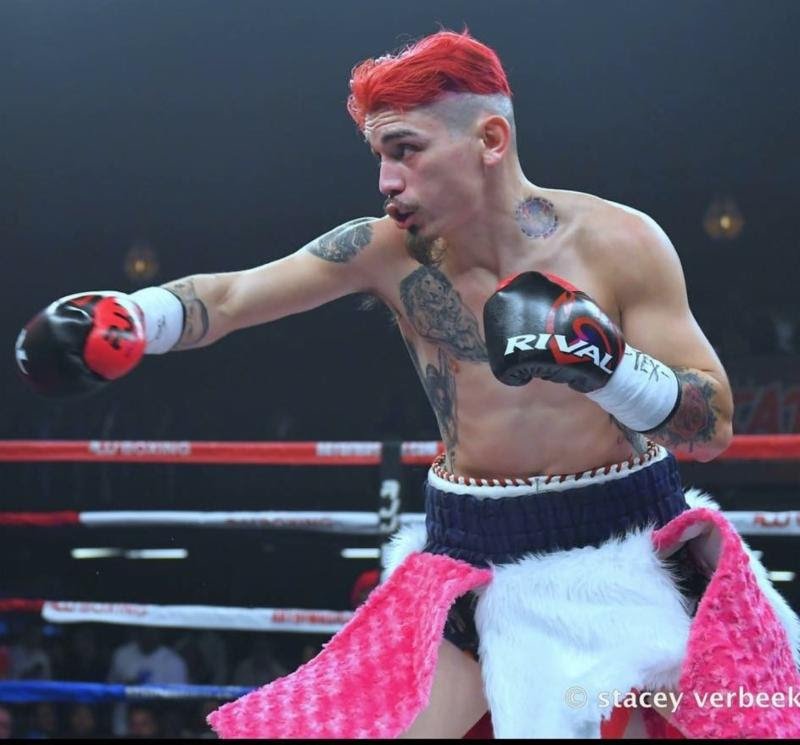 Ximenez vs. Lopez will headline a card to be streamed live on UFC FIGHT PASS, starting at 10 p.m. ET / 7 p.m. PT. The show is the third under a new agreement between Palicte’s promoter, RJJ Boxing, and FIGHT PASS, to live stream up to 72 professional boxing events over the next three years.

The 25-year-old Ximenez (pictured here), who is the former Texas State featherweight champion, won a 10-round unanimous decision in his most recent action against 111-fight veteran German Meraz last July.

Lopez has won four in a row. His most notable career win was a 10-round unanimous decision over 10-1 Christian Bielma, on October 28, He will be fighting outside of his native Mexico for the first time in his 3-1/2-year pro career.

“I feel very motivated for the opportunity to fight on UFC Fight Pass against such a great fighter like Ray Ximenez,” Lopez commented. “I took this fight because I am 100-percent confident that I can defeated Ximenez and become the new WBO International featherweight champion. I want to thank Legends Casino Hotel for inviting us and Roy Jones Jr. Boxing Promotions for the opportunity.”

ABOUT ROY JONES JR, BOXING PROMOTIONS: Co-founded in 2013 by 10-time world champion Roy Jones, Jr. and Keith Veltre, Roy Jones, Jr. (RJJ) Boxing Promotions is on its way to reinventing boxing. RJJ has already made a huge impact in the boxing community in a few short years. Creating exhilarating content for CBS Sports, Showtime, ESPN and beIN Sports in some of the finest venues across the country, RJJ has proven it is conquering the sweet science of the sport.

Riding a five-fight win streak, the 25-year-old Ximenez (18-1, 4 KOs) is expected to make his RJJ Boxing debut in March.

“We’re excited to sign another top prospect like Ray Ximenez to our growing stable of fighters,” RJJ Boxing CEO and co-founder Keith Veltre said. “Ray is an old-school boxer, well-conditioned, hard-working, and we believe he has a very bright future.”

“I’m very excited and very appreciated for Roy Jones Jr. Boxing giving me this opportunity,” Ximenez commented. “I plan on showing everyone that I will be the next world champion from Dallas. “I am ready, willing and able to fight anyone, anywhere, any place and any time.”

In 2010, Ximenez made a successful pro debut, winning a four-round unanimous decision versus Cristoval Larrazolo..

Ximenez won a 10-round unanimous decision over 111-fight veteran German Meraz this past July in Ximenez’ last fight.

“I’m also excited and appreciate for this opportunity,” Ximenez’ manager Michael Montoya added. “I’d like to especially thank CEO Keith Veltre and matchmaker Guy Taylor for believing in Ray Ximenez, Jr. and I am looking forward to a long-term relationship with one of the best boxing promoters in the sport of boxing.”