All fighters made weight successfully at today’s official weigh-ins for Saturday’s Eubank vs Muratov event, a co-promotion between BOXXER and Wasserman Boxing airing live and exclusively on Sky Sports Boxing. 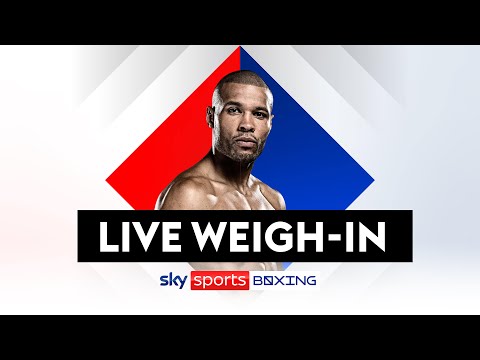 Here’s what they had to say at today’s media day inside the Troubadour Theatre at Wembley’s Box Park:

Ben Shalom, Founder, and CEO of BOXXER
“We’re delighted to bring boxing to the bigger mainstream audiences on Sky Sports, so to be here now on the brink of our first show, the first of many – one every two weeks until Christmas – is an amazing feeling.”

Kalle Sauerland, Wasserman Boxing
“It’s our first show together, and looking we’re forward to it. Looking forward to seeing Eubank back in the ring and also introducing some fresh talent to the British scene and some exciting times.”

Chris Eubank Jr.
“Activity, that was the main goal for this year. I wanted to fight at least three times. A good performance on Saturday and then right back in the ring in December on Sky Sports.

“Everything is going to plan. I really believe so; this is definitely the next chapter; I’ve had many chapters in my career so far, and this is potentially going to be the most exciting one. We have the full backing of Sky Sports, and there are so many huge fights to be made.

“I’m in the prime of my career, I’m 32 years old, I’ve got two, three, four years of solid prime fighting in me, and we’re going to be displaying it on Sky Sports. I’ve got a helluva lot of good fights in me.

“[Muratov] has got 25 wins and two losses, solid opponent, this is a perfect fight for me where I’m at right now. After I get through this man, we’re onto big names and world titles.

“I’ve probably seen about five minutes of this guy box, so I actually don’t really even have a real game plan for this man as of right now because of the late change. We’ll watch more of him as the days go by, and I’ll deal with him on the night.”

Muratov
“I will show it in the ring [how I beat him]. I’ve fought twice in the last three months, and I’m in shape. A win on Saturday will open some big fights for me. You can knock anybody out when you get the right punch.”

Eubank Jnr.
“That’s one thing I know about myself is the chin; it doesn’t move for anybody. I’ve sparred with heavyweights, and I’ve never been knocked out, so this guy is going to have a rough night. He’s here, and we’re both ready to roll.”

Richard Riakporhe, undefeated Cruiserweight
“I can’t wait to get back into that ring again; it’s been too long. I want to put on a great performance for Sky Sports and show that I’m the real deal. This is an exciting time for boxing with BOXXER, and I’m in a great position.

“I believe that with BOXXER and Sky Sports behind me, I can become a big star in the sport and importantly guide me to a World title.”

Mikael Lawal, undefeated Cruiserweight
“Definitely grateful to BOXXER and Sky Sports and being on this platform and showcase what I can do on Saturday night. I’m looking forward to finally getting out there and do what I do and perform and go on to fight the top names in the cruiserweight division.”

Joe Pigford, Undefeated Super-welterweight
“I’m looking forward to it and putting on a performance on Saturday night. It’s been very frustrating [time out of the ring], but I would say mentally and physically where I am now, I’m in a much happier place and more mature and a much better time for me.

“It’s important for me to make a statement because this is a massive platform on Sky Sports. I’m used to knocking people out, but my opponent has a lot of knockouts himself.”

Linus Udofia, undefeated Middleweight
“I’m a former English middleweight champion, undefeated, and one of the best household names in the country. This should be happening; my name should be brought up on this kind of platform. I can’t wait to go.”

Harvey Horn, undefeated Flyweight
“I can’t wait; I can’t sit still. All the boys here are the same. We’ve had a load of angry with the coronavirus. I’ve got itchy knuckles; I’m getting violent on Saturday night, and I’m going in there to take the geezer’s head off.”

Alireza Ghadiri (Razor Ali), undefeated Super-Bantamweight
“I’m grateful for the opportunity to be here; it’s a dream come true. Thanks to Kalle, Wasserman, and BOXXER, my dreams are coming true now. Feeling good and ready for Saturday.

“I was sleeping on the street four years ago or five years ago, and now I’m here. With no money, no support, no English, I was only 18 when I came here, never boxed in my life, and now I’m here. What more could I ask for? This is the whole world to me. My dream came true, and this is just the beginning.”

Ebonie Jones, Featherweight pro-debutant
“I joined the Army when I was 17 and signed off in July and turned professional. I’m more excited than nervous at this point; I’m just looking forward to it. I can’t wait to get in there and show what I can do; I will let my actions do the talking.”

David Avanesyan, Defending European Welterweight Champion
“I have worked very hard with my team, and I’m looking forward to Saturday. He will come and fight me, but I’m ready for him. It will be a good fight, but I will keep hold of my title.”

Liam Taylor, Challenger for the European Welterweight title
“I’ll fight anyone. David’s a world-class fighter, but I’m prepared to fight anyone. Our styles will gel nicely, but I’m not afraid to fight, as I’ve shown in the past. I won’t be taking a backward step.”