The SHOWTIME CHAMPIONSHIP BOXING telecast begins at 10 p.m. ET/7 p.m. PT. It is headlined by Benavídez returning to fight in his home state of Arizona for the second straight outing after delivering a knockout victory over Kyrone Davis in November 2021 on SHOWTIME. He will be taking on a hard-hitting former champion in Lemieux, making May 21 a clash of power punchers, as the two fighters have combined for 58 knockouts in their 68 wins (85% KO rate).

Tickets for the live event, which Sampson Boxing and TGB Promotions promote, are on sale now and are available for purchase through Ticketmaster.com at the link HERE.

“I’m very excited to go into this fight against Lemieux because he’s a guy I’ve watched for a long time, and I like his style. We both have similar fashions because we go for the knockout. That gets me very excited and motivates me a lot.

“We’re also fighting for the interim title, which makes the stage that much bigger. I’ve been training hard in camp for about three months, getting ready for this fight. I’m just glad to go back home and win that title.

“If you win the interim title, the next fight has to be for the title. I don’t think it should be any different in this case. If Canelo Alvarez wants to fight at light heavyweight, he will have to vacate. It’s only fair.

“I train tough to make sure I get the knockout. I feel like I’m at my peak right now. I have a lot of skills, power, and great experience. I know it won’t be easy, but I’ve done everything right in the gym.

“I see flaws in David’s game, and I’m sure he sees flaws in me. I know he wants to stop me, and I want to stop him. This is going to be an excellent fight for the fans. This could be the Fight of the Year because of what’s at stake and the type of fighters we are. We’re two bulls going in there to see who has the most heart.

“I want everyone to see that I’m the best in this weight class. I’m only looking at the fight in front of me. I have to win this fight before I can win anything else. But I do feel like everyone knows where I stand in this division. I’ve been calling out the best, and I respect Lemieux for stepping up to take this fight.

“I wanted to fight back in Arizona again because we had a significant event in November. This is my first title fight back at home, and it’s a dream come true for me. Everything has fallen into place for me. I’ve had a fantastic camp and preparing for a great opponent. This has all the makings for a great fight. The energy is right. This is one of the biggest fights, and that’s how seriously I’m taking it.

“We’ve been in camp for a long time, and we’ve been feeding off of each other’s energy. We’re all like brothers, and we all push each other. I’ve been putting in the work and getting my miles in. Seeing Jose Valenzuela and Diego Pacheco have great victories gives me even more power.

“The main goal for myself is to become the unified champion at 168-pounds. It’s not just about me. I have a lot of fans that support me, and I’m doing it for them. They’ve helped me so much, so I want them to know that I’ve put 110% into training camp every time they come to a fight.

“I feel like I deserve the biggest fights. I’ve paid my dues, and I’ve been here for a long time. But I have plenty of fuel in the gym solely because of how big this fight is. I think the other top guys are making a mistake not giving me the fight now because the more I’m in the ring, the more I’m learning. It will turn around and bite them when it’s time to get in the ring with me. Everything is going to be through the roof.”

“I’m expecting a great fight. Two bulls are going in there, and may the best man win this title. David Benavídez is a very tough fighter. We’ve been watching him for a while. He’s always inspiring. His fighting style – he comes to fight – there’s no messing around with him. That’s my style too. We want that WBC belt around my waist, and I plan to have it on fight night.

“I know it’s a brutal fight. I’m training very hard and doing everything I need to do inside the gym. I don’t want to lose this opportunity. I know Benavídez is a great fighter. I will work very hard and bring the best that David Lemieux can get. I’m leaving with the WBC title on fight night.

“I do believe that my power will translate at 168 pounds. I’ve been working a lot to integrate into the 168-pound division, and I think my passion will be at its peak on fight night. Benavídez is a big guy. We know that. But we’re preparing, and we have the right sparring partners. I’m going to go in there and be very strong. It’s been a long time since I’ve had an opponent like Benavídez, but I’m excited. I’m pleased about this fight. I know what a victory will do for my career, and I won’t miss my shot.

“I’m not looking past this fight. I’m just concentrating on Benavidez. This is a big fight ahead of me. Canelo chooses many of his struggles, but there are rules in boxing that you have to respect. The winner of the interim belt has to fight the champion if he follows the rules, and the rules are the rules. That’s it.

“It’s a big task in front of me. When I sat down with my team and Benavídez’s name came up, we knew it was a tough fight. He’s a tough fighter and a big guy, but we’re preparing and getting ready for him. It’s all in preparation. Styles make fights. I have the technique to hurt Benavídez, and I’m training hard to beat this guy.

“Anything can be done, and you have to go out and do it. David Benavídez is a perfect fighter, but everybody is beatable. Nobody is invincible. That’s what we have to prove. There’s no cheating boxing. You train hard for a fight. You don’t underestimate your opponent, and surprises can happen. I’m planning on bringing that title back home to Montreal.

“Regardless of your age, it’s now or never in every fight in the boxing ring. You don’t get many chances to leave a good mark in the game, so every battle must be taken seriously, especially a struggle of this magnitude. There’s a lot at stake for me. I know I’m the underdog, but I don’t care. I’m just going in there to fight, underdog or not. I’ve been the underdog in the past, and I’ve won the fights. It doesn’t bother me.

“The eight pounds makes a world of difference. One hundred sixty pounds was challenging to make, especially towards the end. I feel excellent training at 168. I’m very comfortable making that weight. I’m training very hard, building strength and muscle and not worrying about cutting weight. I’m feeling great.

“I feel like I’ve been underestimated during my career. But the only way to come back is with a strong victory against an opponent of an elite level. That’s what I’m planning on doing on May 21.” 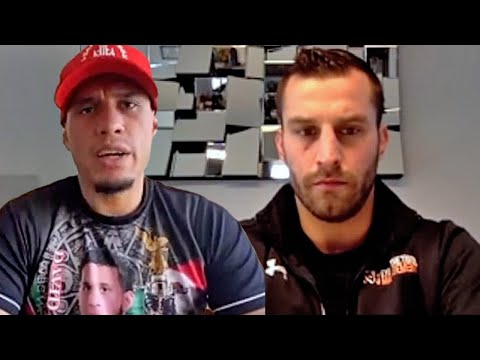