Eddie Hearn, Matchroom Sport Chairman: “Well, good afternoon, the final week of Fight Camp this Saturday live and exclusively on DAZN around the world as we close out with a tremendous card with some of the biggest names and stars in world boxing headlined by an incredible fight. Joshua Buatsi against Ricards Bolotniks in what is a WBA Light-Heavyweight World Title Eliminator. A tremendous card.”

“This is it, Eddie. This is the fight. You’ve been eager to make it happen from early on, and when this was offered to my team, we said yeah straight away. It’s a good fight, the ring outside looks good, I’m looking forward to it.

“That’s good for me, I’ve said it before we can go into there to box, with a strategy, but sometimes you’re going to have to fight, sometimes the tactics will go out the window, and it’s the man against man. We’ll see what happens and how it goes, but I’ll be prepared; I’ve covered all aspects, I’m ready.

“It will be a good gauge to see where I’m at; I think a good performance from myself with giving you the green light to get the belt. Either way, I’ll be prepared.”

Ricards Bolotniks – Riga, Latvia – 18-5-1, 8 KOs – fighting Joshua Buatsi in a WBA Light-Heavyweight World Title Eliminator:
“I wanted this fight straight after the Golden Contract, and now I’m here, and I’m so happy. I’m ready for Saturday, and I am only here for the victory.

“Buatsi is a big star here and a good boxer. He’s strong and tough, and I want a street fight with him. In Latvia, I was always fighting on the street. Boxing is more professional, but I want a war, and I’m sure Buatsi and I will have a massive fight.

“I’m focused on Saturday, but after this, of course, I want the World Title. I have the perfect team around me, and this is the right time.”

“We were scheduled to fight at the end of August in LA. Obviously, that didn’t happen, the opportunity came up to fight here at Fight Camp, and I haven’t fought here yet. We had a list of opponents and wanted to pick the hardest. It’s something I wanted to tick off my list, so I jumped at it with both hands; Tony and I both said 100%. Joshuah Hernandez is 10-3, but those three losses are little blips. He’s a tough opponent, and I’m looking forward to it.

“As we’ve said in previous press conferences and since I started boxing, I aim to be a World Champion, and that’s what I plan on doing. Obviously, Joshuah Hernandez is in my way, and he’s trying to stop me; I just need to get through Saturday night, and if I’m going to go on, challenge, and win World Titles, I’ve got to beat people like Joshuah. He’s a perfect opponent, and his record does show how good he is.

“The cycle before us like Kal Yafai four years on he went on to win a World Title, same as Callum Smith. This time around, the boys and girls have finished the Olympics, and now it’s our time – don’t get me wrong, I’m a couple of fights away, but we’re in touching distance. I’m there, I can see it, feel it, and I want to get closer and closer. Saturday night, I need to beat Joshuah Hernandez to get that little bit closer to my dream, which is to become a World Champion.”

“I stay ready, I stay prepared, in the gym working on my mental and physical strengths. I feel ready to go; the past is the past, my record isn’t pretty, but it is what it is. If you do your research, Chris Colbert is the only person to beat me; I should be 12-1. It is what it is; I’m here to prove a point.

“God doesn’t make mistakes; I’m a man of faith and coming off work; I’m a schoolteacher. Once the school year ended, I normally picked up a job for summer, but I just felt like a blessing coming my way. I spoke to my family and said I’m not going to work this summer; I’m going to focus on the sport, focus on boxing, and here we are. I’m blessed, and I’m ready.”

“It feels different being the A-side, there is a lot more pressure, but I enjoy that. He’s a tough opponent, but it’s a solid test for me. Runowski is on form, and he and his team are confident, but what I do best is ruin that confidence. Round by round, it will fade.

“I’m focused on Runowski and not thinking about anybody else, so I’ll get the job done in style and then move on. He has the type of style to make me look good. I’m excited to put on a good display of boxing.

“I do well under pressure and proved that last time out. There is more pressure on me being the favorite, and it’s new territory for me. It’s a great occasion on a big show, and I know I’ll perform. That’s all that matters.”

“I am ready for this big fight. I have trained very hard and have had a two-month camp with excellent sparring. I’m ready to showcase my skills on Saturday, and I’m very confident I will win.”

“It’s good to be back here at Fight Camp; there’s a bit more of an atmosphere this time. Two fights were scheduled within four weeks, but let’s got it twisted. Most prospects wouldn’t have taken this fight knowing I’ve got a ten-rounder in my hometown of Leeds in only three weeks, but these are the fights I want. Italian prospect, 5-0, three knockouts, all I’m concentrating on is Saturday night and doing a good job.

“It’s what I wanted, to step up faster if anything; it’s been a bit of a blessing in disguise because I’ve had more time to work in the gym and more time to spar top-quality fighters. Kid Galahad won the World Title last week; I’ve done numerous rounds with him during lockdown; I feel it’s brought me on a lot more as a fighter rather than 3 or 4 more fights against these lower opposition fighters. I’m ready to fight these unbeaten guys, step up and look good doing so.”

“I’m grateful for the opportunity, I came here to win, and I can’t wait for Saturday.

“I will take this opportunity on Saturday to show my skill, and I’m grateful once again for the fight.”

“I’ve been training really hard for this fight, and I know he’s going to bring a good Saturday, but I’m prepared for whatever he brings, and I’m going to do anything to win and pick up another title.

“In my last fight, I got dragged into it a little bit, but you want to win the easiest way possible, and that’s what I’m going to do Saturday night. I went back into the gym and worked on the mistakes I made last night. In this fight, I’m going to do whatever I can do to win, trying to win the easiest way possible; if that means going to the bell, then I will.

“I’m fully focused on Saturday night; I’ve been like that since my amateur career. Since my first fight, I’ve taken it one fight at a time because, in boxing, you don’t know where you can after your next fight. For me, Saturday night is all I’m thinking about; I don’t care what happens after that.”

“Thanks for having us; we think that each fight is different; we’re putting our record and the losses behind us, we’re prepared to win. Luis wants the belt; he’s confident in his work and that he’s going to win. He wants to make history in the ring not because of his condition but because he wants to put up a good fight.

“We have great communication; we have to have it outside the gym as well to create these signs and this language. Sometimes it’s complicated, and sometimes, we get desperate when giving instructions, strategy, and motivation with the physical situation we’re in. We improve our communication every day, and we’re confident that we won’t have to worry about communication in the ring – Luis’ talent will show with everything he’s learned over the years. We’ll have everything we need to win the belt.

“We’re very confident in winning and the work we’ve done; you mentioned Lara, and our camps actually coincided with this fight. As Mexicans, as warriors, we always put everything in the ring to bring a good, no one going to regret watching – it’s going to be a great fight, and we’re confident of winning.”

“My last fight was a great learning experience; I fought another undefeated prospect, but what people don’t know is I took that fight on short notice, and on top of that, I recently had a daughter – I had to take a week off during my camp. My team was trying to get me to pull out of the fight, but I told them he couldn’t beat even on my worst day, and that was true.

“I feel like I won the fight easily, but that’s in the past now; we’re here with Reece Bellotti, so my full focus is on him.

“I feel like Reece Bellotti somewhat resembles Perez, so that was another reason I wanted to take this, to show people that I can handle pressure easily. I know he’s going to be there, be tough, and that’s what I’m looking for.

“I’m very excited about this being my first title; I was definitely watching the Olympics supporting Team USA, Davis, Johnson, Jones, Torres – shoutout to all of them; they did their thing in the Olympics. Hopefully, we can see all sun it up and do the same thing we did in the amateurs in the pro game.”

“I’m back again, it’s good to back, back with fans will be a little bit different – a bit of an atmosphere. It’s a good fight, and I’m looking forward to it; I can’t wait to get back to winning ways.”

“Probably more than ever, as you say, I’ve been in these types of fights. People that have beaten me are good fighters, they’re going on to do delicious things, so I’m at that level where I now need to push on, get a win, and propel myself to bigger fights.”

“You can always rely on power; you have to have a different game plan, work on different strategies to get to these fighters. You can’t just think, oh, I’ll go in and bomb them out; it’s not always the case – hopefully, we see that Saturday night. We’ve been working, getting great sparring, that’ll show Saturday night.”

“I was working hard, originally fighting a Mexican in Mexico, but you’ve done your magic Eddie, and now I’m here. I appreciate the chance; thank you.

“My mum was my best friend; she’d want me to fight and not be bumming around and feeling sorry for myself. I appreciate you getting me out and keeping my mind active.

“I want it for myself, I know I won the fight, but I can perform better than that. We’ve changed a few things in the background, so we’re ready for this guy – it won’t go twelve rounds. I know for a fact it won’t go twelve rounds, so beat this guy Saturday, back in the gym and Kiko in Manchester. Then I’m ready for these big boys, the World Title Eliminators or European. I to want to beat Kiko; I’ll be ready then.

“We all started at the bottom, amateur days coming up; Lindon is my brother – it’s nice to have him here we’re both shining together. It’s a ripple effect, put on a good performance Saturday night, and it’s onwards and upwards.”

17:30 BST LIVE ON BEFORE THE BELL AND FIRST FIGHT 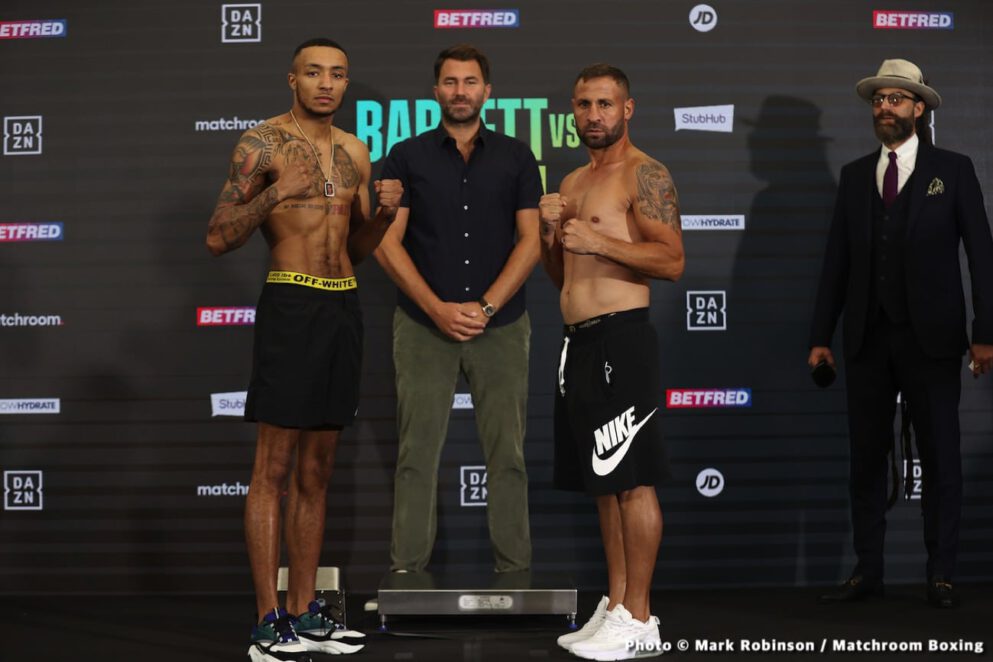 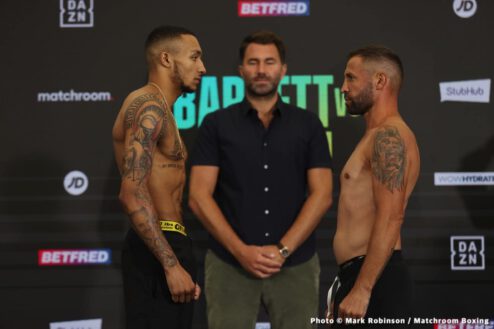 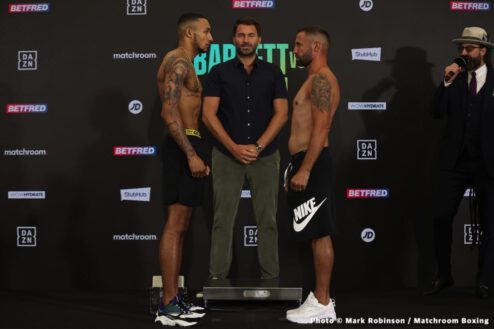 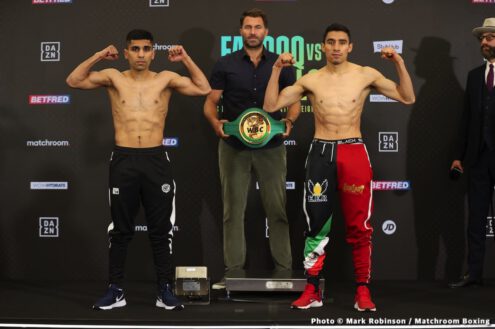 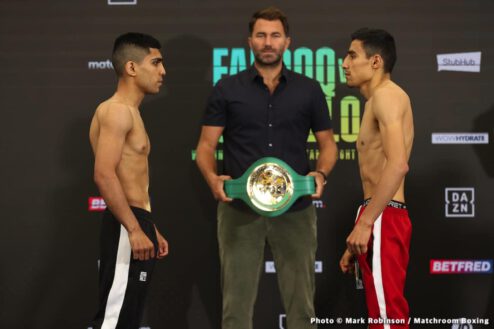 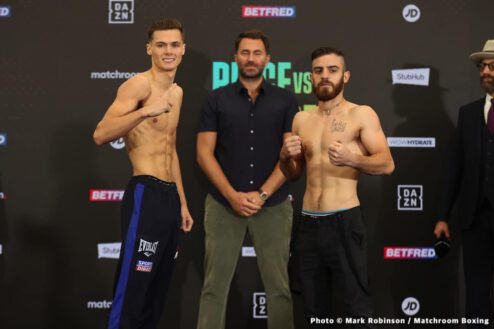 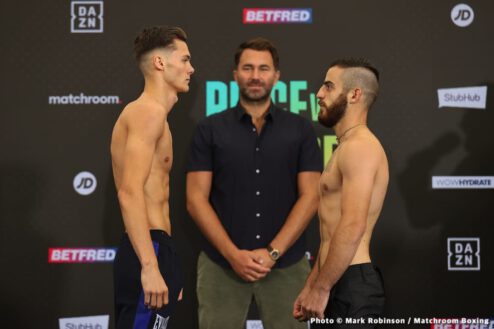 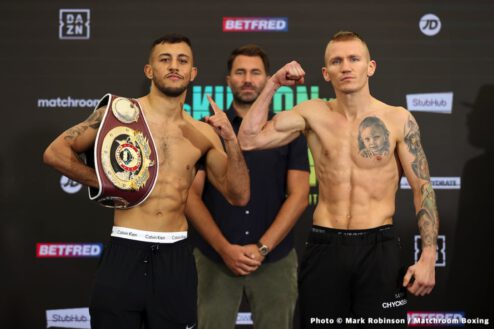 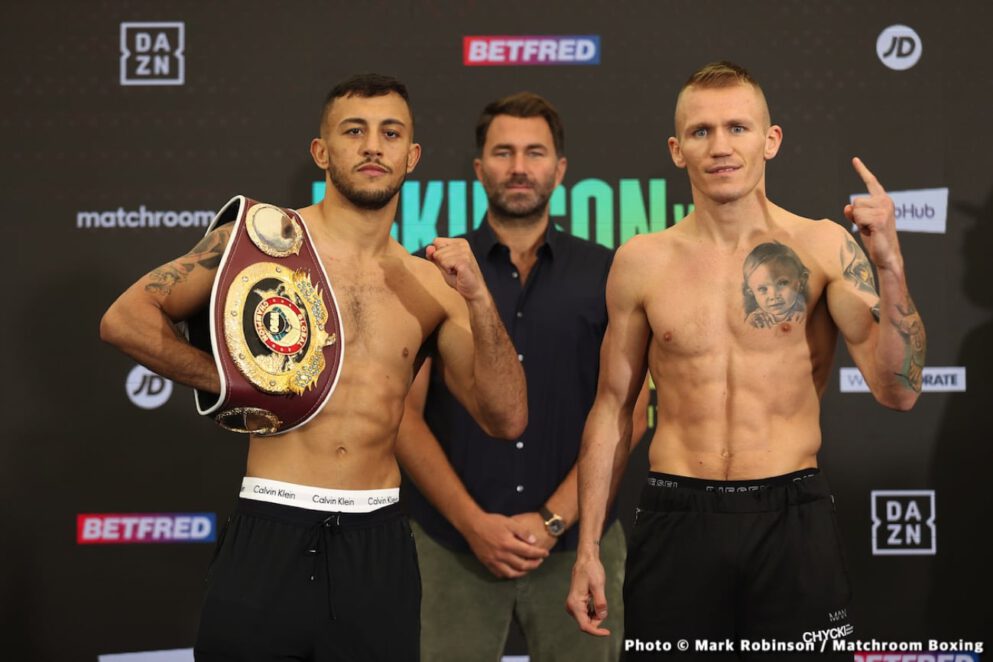 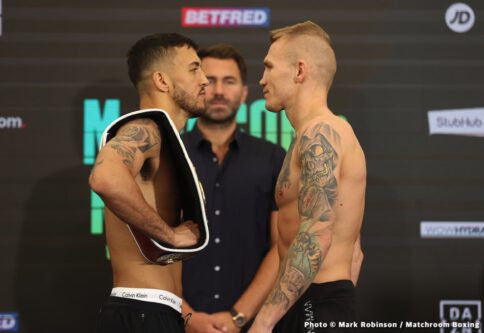 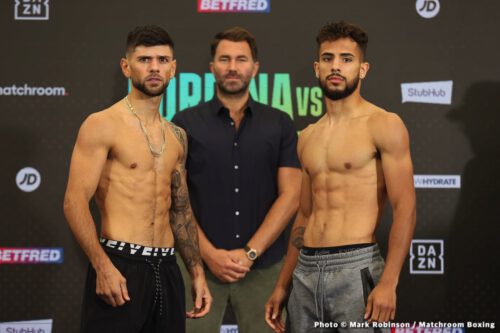 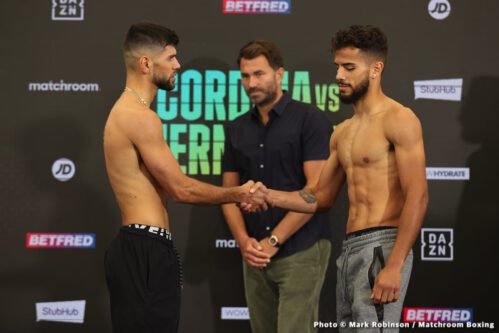 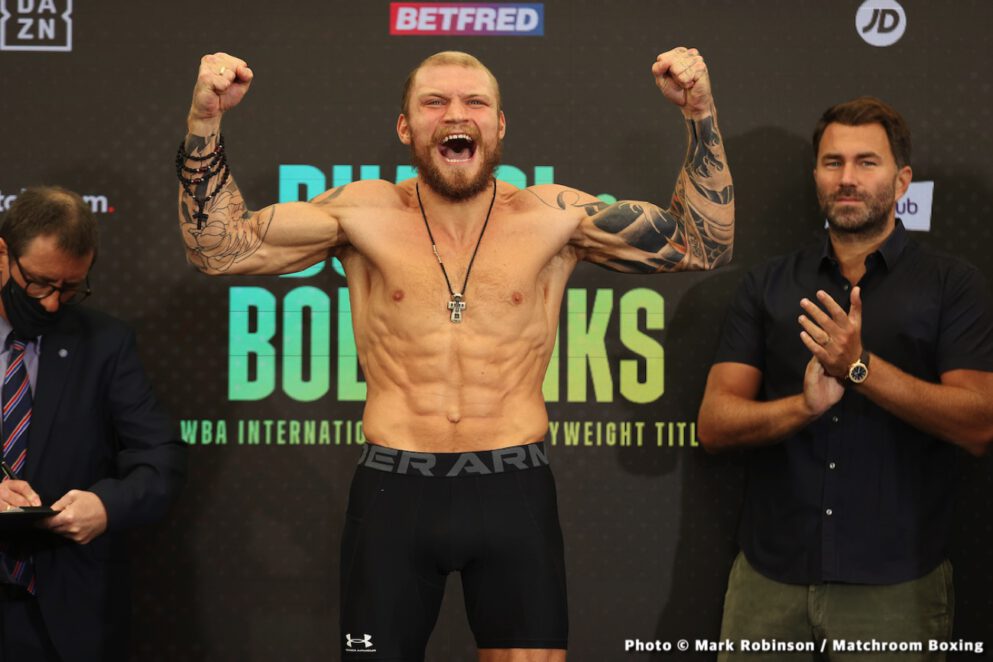 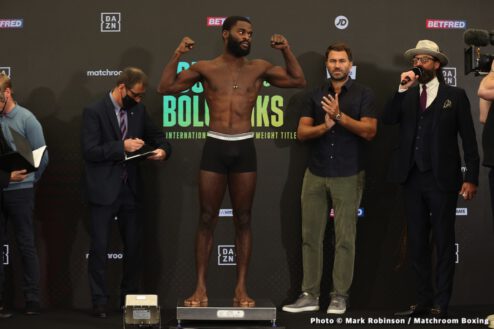 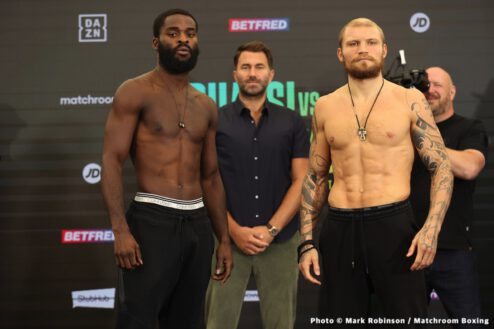 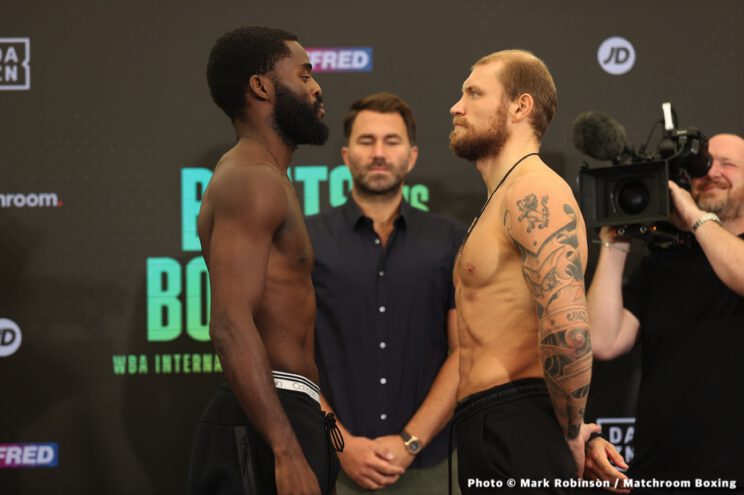 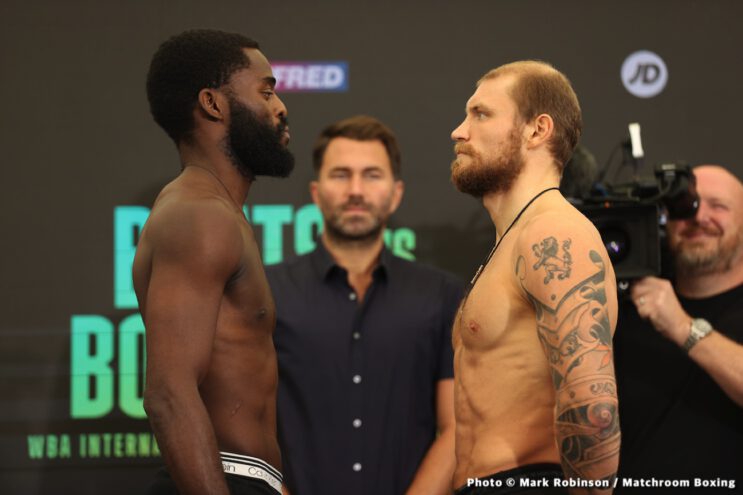