Fighters competing on the Mayweather vs. Paul SHOWTIME PPV undercard previewed their respective showdowns during a final press conference Friday before entering the ring this Sunday, June 6, at Hard Rock Stadium in Miami Gardens.

Friday’s press conference featured two-division champion Badou Jack and unbeaten Dervin Colina, who meet in the 10-round light heavyweight co-main event, and former unified champion “Swift” Jarrett Hurd and veteran contender Luis Arias, who square off in a 10-round attraction.

Also participating in the press conference was former NFL star Chad Johnson and versatile fighter Brian Maxwell, as Johnson makes his boxing debut in a special exhibition against Maxwell to kick off the pay-per-view telecast at 8 p.m. ET/5 p.m. PT.

Tickets for the live event are on sale now and available for purchase through Ticketmaster.com.

Here is what the fighters had to say Friday from the JW Marriott Miami Turnberry:

Read:  Serrano vs Mahfoud at the AO Arena Manchester on September 24th

“I’m just thankful that I’m still fighting on Sunday night. Now we have a new opponent, and it’s going to be the same outcome. I’m in great shape, and I can’t wait.

“Colina is just another guy. I respect him for coming in and stepping up as a late replacement. But I was going to win this fight on Sunday, whether it was Pascal or anyone.

“I’m very frustrated about Jean Pascal. But I’m a pro and I can adjust no matter who is in front of me. I’m disappointed because I won the first fight against Pascal, and I waited 18 months to get my revenge.

“I have a little anger that might get taken out on Colina, but it’s nothing personal, just business that I’m here to take care of on Sunday night.

“I don’t really care about the title too much. I really just cared about getting that revenge against Pascal. I waited so long for this, and I could have taken different fights while I waited.

“He’s an undefeated guy, so he’s going to come in here with a lot of confidence, looking to show off his power. We’ll be ready, though, regardless of how he comes into the fight. I had great sparring like always, so I’m prepared for what he’s going to bring.”

“I’d like to thank Team Badou Jack for the opportunity. This is what I do. I was born for this. Come Sunday. You guys will see what I do.

“I was scheduled to fight June 11 on a different card. The fight came a little bit earlier, on June 6. But I’m ready to fight, and there are no excuses for this fight. I’m coming to win at all costs. And you’ll see what I do on Sunday.

“I respect Badou and what he’s done in this sport, but I know that I have everything I need to shock the world come Sunday night.

“I have nothing to lose, and that makes me dangerous. I’m going to leave everything in the ring and announce to the whole world that I’m a fighter you’re going to be hearing from.”

“Everyone knows I have unfinished business at 154-pounds. I’m not looking past Arias, though. This fight is just a stop at middleweight because I’m going back down to take care of that business.

“We’ve had an amazing training camp with my new trainer Kay Koroma in Colorado Springs. I have a chip on my shoulder. I think a lot of people forgot who I was. I had the best resume in the weight class. Come Sunday. I’m going to remind everyone who I am.

“It’s always strictly business, and it’ll be the same on Sunday. Arias is obsessed with my weight and thinks I’m struggling. But he needs to focus on what he needs to do on Sunday night.

“I don’t know where I’m rated right now, but I’m the best fighter at 154 pounds. Showing that to the world is the goal on Sunday.

“We just took it back to the basics in training camp with my coach Kay Koroma. You can always learn more in the sport.

“I’ve been boxing for 15 years now, and coach Koroma just helped me evolve the things I already knew. He’s got me not just coming forward and using my strength, but moving around and boxing a little bit.”

“I think the narrative is they needed an opponent for Jarrett Hurd, and I wasn’t looking so great lately. But people tend to forget I was 18-0 before I got my first blemish. When I was with Floyd Mayweather, I was 9-0, and that’s when I was most comfortable. That’s the mentality I’m taking into this fight.

“I’ve been around Floyd since December. I’ve been in Vegas training in the altitude, just like Hurd. I’m in tip-top shape for this fight, and he still has to figure out how he’s going to fight.

“Now the boxing world is going to be watching this fight. I will be on my Ps and Qs, and he won’t have to look for me. He will have to pick and choose once he gets hit on Sunday what style he wants to fight.

“This is a must-win for me. This is a great name for my resume. I haven’t ducked anyone. I’ve taken every name that’s been brought to me. When his name came up, I said absolutely. I’m ready, and I’m an old-school fighter. I’d fight you in this backyard, that backyard, any backyard. On Sunday it will show.

“He’s the one who has got the issue with the weight. The fight doesn’t really make much sense at 160 because he’s not ranked and wants to go back down to 154. But it’s too big of an opportunity and too big of a card to complain about the weight. We’re going to put the gloves on, and whatever he weighs, he weighs. This is going to be the best fight on the card.”

“I feel really good. I’ve been using boxing to prepare for football throughout the years, but I’ve never done it to this magnitude. To prepare for an actual fight, is something new. I’m facing a guy who does this for a living, so I’m not taking this lightly at all.

“I was always nervous before every kickoff. So I’d be a fool to say I’m not nervous going into something where I’m out of my element. 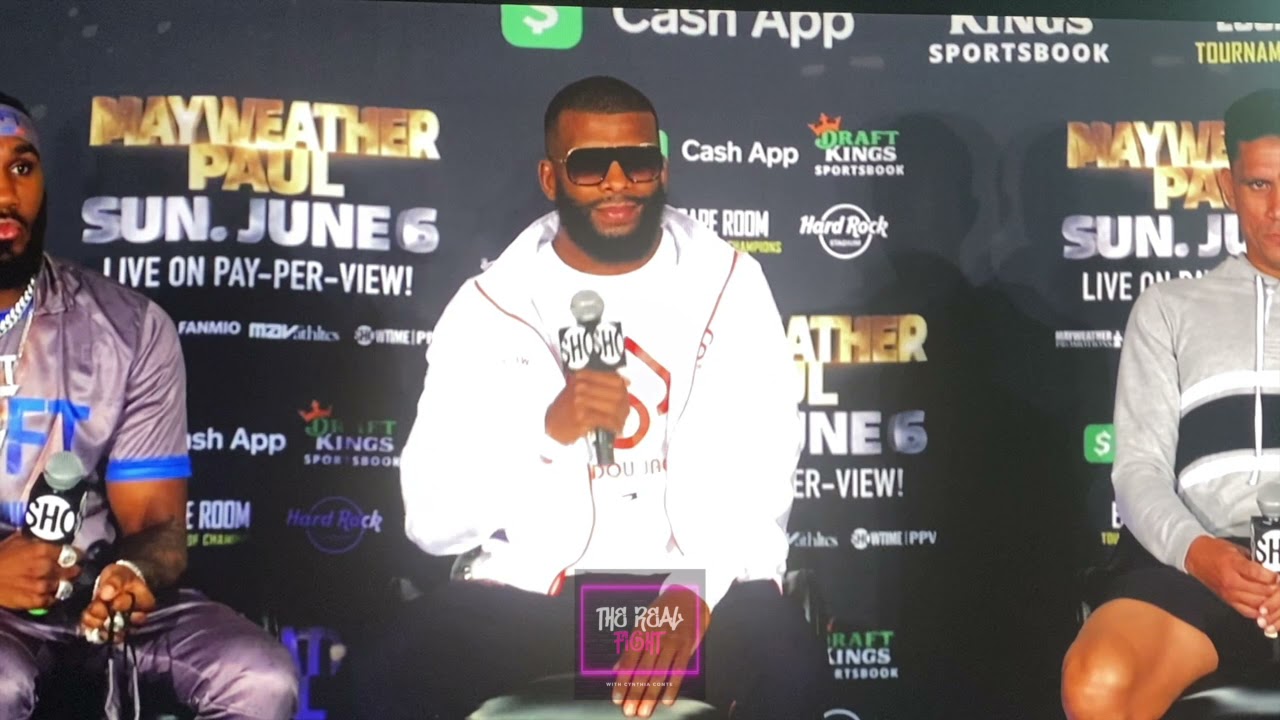 “One thing I’m extremely good at, is when there’s lights, cameras and a crowd, is going in there and entertaining.

“I’ve been working with Jorge Masvidal a little bit, but the last few weeks have been in Houston with Jermall and Jermell Charlo. That’s where most of my work has been. I’ve been doing everything possible to make sure I look at the part Sunday night.

“I’m out of my element, so of course I’m approaching this fight humbly. He’s coming to knock my head off. Football is something I did all my life, that’s why I walked the way I did. I can’t be arrogant and take this fight lightly.”

“I don’t know how my name came up for this fight. But like everyone has said, ‘Who is Brian Maxwell?’ That’s been a trending topic on every social media. But guess what? Today, you all know who Brian Maxwell is. And I’m excited about this. It’s a perfect matchup for me.

It’s a perfect matchup for Chad. The best of both worlds. Coming from a fan. My hashtag on social media has become ‘Idols Become Rivals.’

And this is a perfect time and the perfect moment for him and me. Like I told him over the phone, I’m a huge fan. But the fanboy has gone out the window. Now we have to entertain, and that’s what we’re going to do.

“This is an exhibition, so we are coming to entertain the fans and put on a show. But at the same time, we are two men who are coming in front of each other and have to fight. No matter the outcome, we’re going to put on a great fight.

“I’ve followed this man since Day 1. I know his every move. I’ve modeled myself after him, and it’s like fighting myself. I’m going to be humble about this, and we will put on a show for everyone.

“That has been the question, what round am I going to knock him out. I’m here to entertain and to have fun. This is a great opportunity.”

“We have a stacked undercard on Sunday night. I’ve promoted tons of events, and this is one that I’m really looking forward to because it gives us an array of great fights in addition to a little something different.

“I’m really looking forward to this card. South Florida has been buzzing since we announced this event. We can’t wait for the great crowd and the tons of fans tuning in from all around the world.

“When I think of Chad Johnson, he’s a showman. He does so many different things really well. He’ll be making his foray into the boxing industry in what should be a terrific bout against Brian Maxwell. Chad is looking to possibly steal the show, which is what he’s known for doing.

“Former unified champ Jarrett Hurd is a great champion, and I’ve known him for many years. He’s looking to get back and make his mark where he left off.

He’s let it be known that he will retake control of the 154-pound division after this fight. He’ll be up against Mayweather Promotions own Luis Arias, and I’ve had the opportunity to witness Arias’s preparation firsthand. I can tell you right now he’s more than prepared to upset Jarrett.

“In the co-main, I can’t say enough about Badou Jack. He’s a great champion in the ring and a terrific example outside of the ring. He does so much to help people worldwide,d and Floyd and I are really proud of him. We know he’s going to put on a great show Sunday.

“When it comes to this undercard, the fans are in for a great treat. It’s going to be nothing but action from top to bottom.”