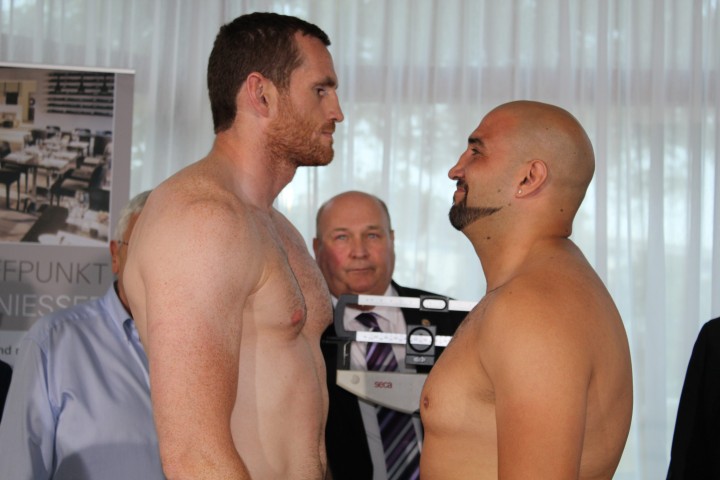 David Price (19-2, 16 KOs) and Erkan Teper (14-0, 9 KOs) took to the scales today ahead of their European Heavyweight title fight on Friday night at the MHP Arena in Ludwigsburg, Germany.

‘’I feel great,’’ said the former British and Commonwealth Champion.

‘’I’m calm, collected and ready to go. This is a good weight for me. I’ve come in a little lighter than my last fight, but I’ve had a longer camp so that’s to be expected. I honestly believe I’m in the best shape of my career.

‘’Now I just want to get in there and get the job done. I’m not worried about Teper, I just need to concentrate on what I’m doing. He’s a good boxer, he’s undefeated and has some decent wins on his record, but he’s never fought anyone like me. Mentally and physically, I couldn’t be better prepared. I’m 100% confident and ready to bring the belt home!’’

David Price (19-2, 16 KOs) is full of confidence ahead of his European title fight against the undefeated Erkan Teper (14-0, 9 KOs) on Friday, July 17 at the MHP Arena in Ludwigsburg, Germany.

The 6ft 8″ British heavyweight has recently enjoyed a good run of form, claiming four successive victories to earn himself a shot at the vacant European crown, and now, following the perfect training camp, the 2008 Olympic bronze medalist believes he is ready to bring the belt home.

‘’This has been the toughest training camp I’ve ever been involved in,’’ said Price. ‘’But that’s only right because this is the biggest fight of my career. You push your body to the limit and spend a lot of time tired and aching, but now, the hard work is done, and I can’t wait to get over there and take that title.

‘’I couldn’t be better prepared. I’m fired up and ready to go. All the hard work I‘ve done with Franny Smith and my strength and conditioning coach John Noonan has really paid off. It’s been the perfect camp. I’m injury free, I’ve been looking after myself, getting regular treatments and physio, and I honestly feel like I’m in the best shape of my life.

‘’I’ve had some great, competitive sparring. We brought over Agit Kabayel from Germany whose 11-0 and Bogdan Dinu from Romania whose 12-0, both undefeated prospects and both similar in size and style to Teper. It’s always difficult to exactly replicate your opponent, but we believe we’ve had the ideal sparring for this fight, so now, I’ve just got to get in there and do the business.

‘’This isn’t a fight where I’ve had to go looking for motivation. There is a massive carrot dangling in front of me. If I win this fight, not only am I European champion, but also back in contention for a shot at the world title. There’s no way I’m going to let this opportunity pass me by.

‘’I just need to stay calm and stick to the game plan. It’s a big occasion and a big fight for me, but emotionally I need to be cold. I need to keep a clear head and follow instructions. I’ve given 110 per cent in training and I’ll be giving 110 per cent in the ring, and I’m confident that will be enough to win me the belt.’’

Price’s European title challenge will be televised by BoxNation in the UK, live and exclusive on Sky 437/HD 490, Virgin 546 and Talk Talk 415. Subscribe at www.boxnation.com or watch online at Livesport.tv and via iPhone, iPad or Android.