Unbeaten Interim WBA Super Featherweight Champion Chris Colbert and hard-hitting contender “King Tug” Nyambayar faced off at the final press conference before they meet in the main event of action live on SHOWTIME this Saturday, July 3 in a Premier Boxing Champions event from Dignity Health Sports Park in Carson, Calif.

Fans outside the US can watch the entire fight card LIVE on FITE TV:

The event is promoted by TGB Promotions. Tickets are on sale now and can be purchased at AXS.com.

“I was going to knock [Yuriorkis] Gamboa out cold, and now ‘King Tug’ has to take the knockout.

“My hard work is finally paying off. All I have to do is stay focused, dedicated, and disciplined, and then I’ll be the face of boxing in a couple of years.

“I’m ready for this fight. Nyambayar knows he’s in for trouble on Saturday. Nobody out there can take a fight with me on a week-and-half notice and not be in for trouble.

“Me and Michel Rivera got a lot of rounds in together during training down in Miami. We did a great job all camp and I’m just ready and excited to get in the ring.

“I’ve been knocking out everyone they put in front me. They still don’t give me the respect I deserve yet. I just have to keep doing my thing on Saturday night and embarrass him.

“I can’t tell you if he’s my toughest opponent yet. I know that he’s not beating me, and that’s a promise. There’s no way a 126-pounder will come up in weight and beat me.

“He’s a fighter with only one loss, he can come back from that. But it’s not going to matter on Saturday night. He’s supposed to be confident in himself. He can’t say he’s going to get washed Saturday, but that’s what is going to happen.

“I appreciate ‘Tug’ for taking the fight, but Saturday night I’m going to get in there, dominate and beat him up. This is a Nissan vs. a Lamborghini, and I’m the Lambo.

“I agree that ‘King Tug’ might be better opposition than Yuriorkis Gamboa would have been. But it doesn’t matter if it was Gamboa, ‘King Tug’, or Arnold Schwarzenegger in there with me, it was always going to be the same outcome on Saturday night.

“My hair is orange this week as a dedication to the cause of fighting Multiple sclerosis. One of my friends, Dave, back in New Jersey has it and he told me his story of how he was paralyzed as a kid and also had MS.

Then I saw him on the Stairmaster in the gym the next day for like an hour. I saw that and realized there are no excuses I can make for not being in the gym. I do the different hair colors to make people feel special. I want them to know that I’m fighting for them.

“Nobody in the 130-pound division can beat me. I’m going to continue to prove that every time I step into the ring. I’m going to deliver a dominating performance. Don’t be surprised when I stop him.

“I don’t think this is going past 10 rounds. I’m going to keep proving that I have power on Saturday night. I’m not discrediting his skills, but I’m just different.”

“I’m really excited for this fight. It’s my first fight at 130 pounds and I want to show what I can do. I’m ready for this opportunity.

“Two weeks’ notice is enough for me. If I didn’t take the fight, Colbert wouldn’t have a fight. So he should be thankful. Let’s see what happens. I’m going to whoop his ass.

“I don’t think that he can stop me. Watch me on Saturday night. I’m ready.

“I’m not worried about anything he says. I’m just focused on the sight. I really believe in myself and that I’m going to hurt him on Saturday night.

“Colbert has similar speed compared to Gary Russell Jr., so it’s not going to be anything I haven’t seen before. The adjustments from the Russell fight have been made in the gym over time.

“I’m very happy to be fighting at Dignity Health Sports Park because Los Angeles is my second home. It’s very exciting to be fighting here and with a crowd there watching. The Mongolian fans are going to show up on Saturday.”

“I had a good camp and I have a good team, led by Herman Caicedo who is my coach along with Jukka Toivola.

“Jon Fernandez is a good boxer and he’s a good puncher. I don’t know much about him, but I know that he’s Spanish and he’s a tall guy. He hits hard but I’m in the type of condition to be great in this fight.

“I’m sure that on July 3 when people are watching the fight, they will see who the best boxer is. I’m ready for everything.

If he wants to fight instead of box, I will fight too. I have the skills. I believe that I am faster than him. I don’t have problems with his height.

You can see in my past fights where I was fighting at 144, and I looked good with big boxers too. I don’t have a problem with it. Everybody will have to tune in July 3 on SHOWTIME, and they will see Michel Rivera beating Jon Fernandez.

“I’ve been waiting for this opportunity for a long time. I’m Dominican, and in the Dominican Republic you don’t get much opportunity.

I came here and I am making my name. Everybody will know that I’m ready to fight the top names at 135 – the best boxers. I have the skills and the talent. I’m young and I’m pretty, too.

“It’s good that he sounds confident. I am confident too. That makes for a great war. He has a lot of knockouts, but they weren’t against any boxers like me. I’m focused. Like I said, he’s a good boxer, but I’m better. I’m trusting my talent and I’m trusting my condition.

“My perspective remains the same after this press conference. Fernandez is a proud fighter and I expect nothing less than what he said.

I’m also a proud fighter and I’m convinced that I’m better than him. I consider myself better prepared and ready to be considered one of the top boxers in the 135-pound division.

“Training with Chris Colbert was a great experience, and the sparring sessions were awesome. He made me better, just like I made him better. He’s a great person.

My fellow Dominican fighter Jeison Rosario wished me luck and told me he knows I’m going to be a world champion someday, and that he will be supporting me and watching the fight from the Dominican Republic.

“Of course I believe that I am the next world champion from the Dominican Republic. I can beat all of the top boxers, the top five, in the 135-pound division.

I want to make my name at 135 because I know this is a strong division now. I want everybody to know me at this weight.

“I promise a good fight. Everybody will see the next superstar in the ring on July 3.”

“I’m very excited to be here for this fight. Training camp in Madrid and Mexico have been great. We’ve had an outstanding preparation.

I’m facing a great opponent in Michel Rivera, but this is the door I need to open to be in the big leagues of boxing. I don’t plan on missing out on this chance.

“I’m glad he’s confident in his abilities, but I think this is a 50-50 match. It’s going to be a great fight and we’re definitely on the same level.

There’s no difference in skill levels. I’m going to use my height and show off my boxing ability on Saturday night.

“Rivera is a very good boxer, and has many skills, but I believe that I have equal skills and more power. If I get the opening, I can knock Rivera out.

“I promise that we’re going to put on a great show and deliver fireworks in the ring. My hand will be raised when the fight is over.

“There’s nothing like fighting in Los Angeles. I have already been here before, but nothing can compare to being in the big show.

“Everyone in Spain is supporting me. My city of Bilbao has sent me all its love and they believe in me 100%. Even some famous soccer players have reached out to me. Players from Athletic Bilbao and (former Spain national team striker) Fernando Torres.

“I would like to win in order to open the door for other Spaniard boxers who come behind me and relish this opportunity – like my brother Eker, who is about to make his professional debut. I want to make him proud and put Spain on the map as far as boxing is concerned.

“If I win, it’s not just because of my power. It’s going to be a close fight, but I’m going to give everything I have to come out with the victory.” 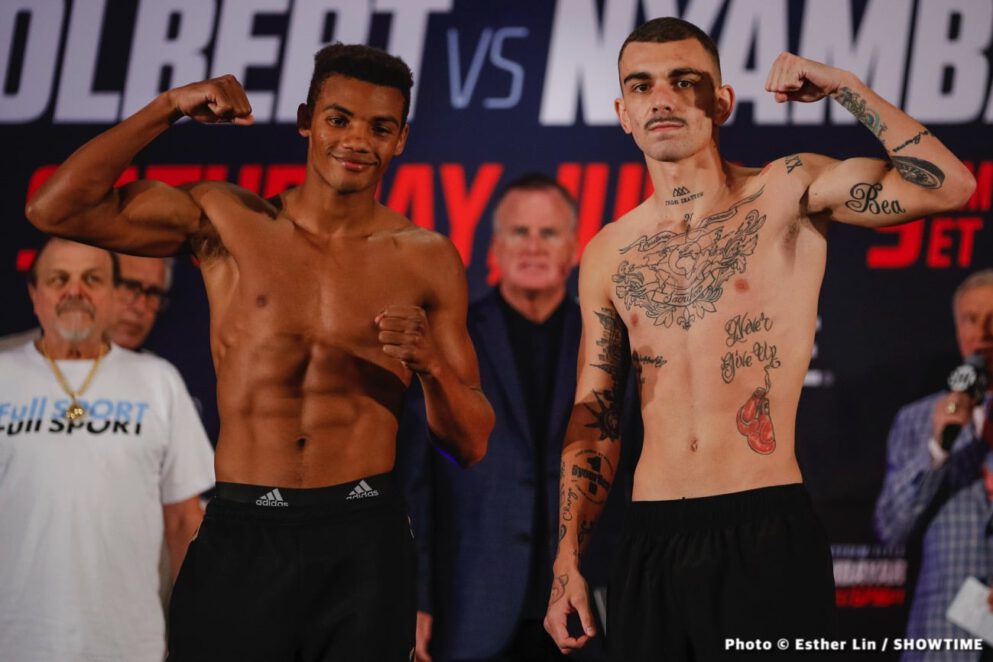 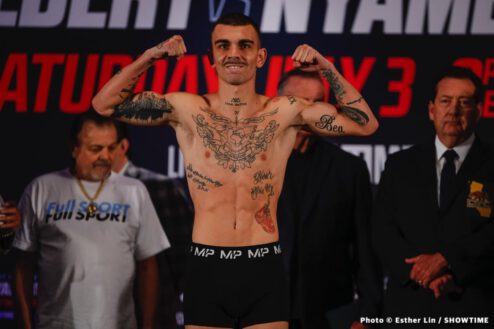 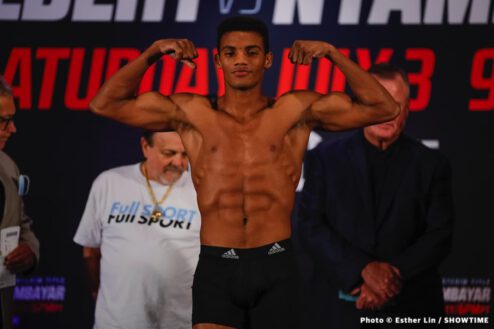 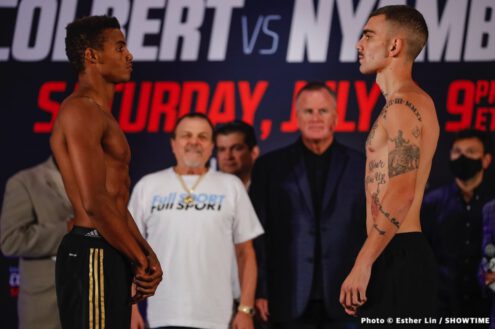 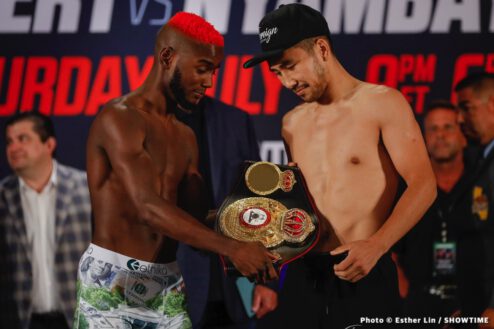 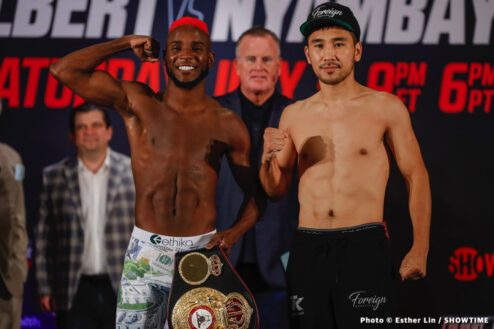 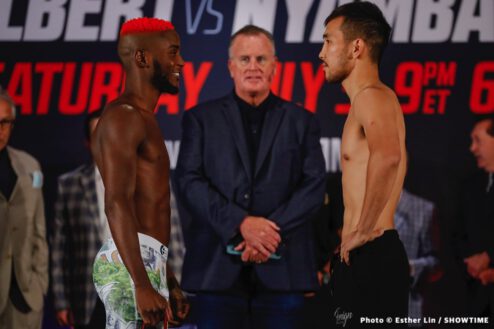 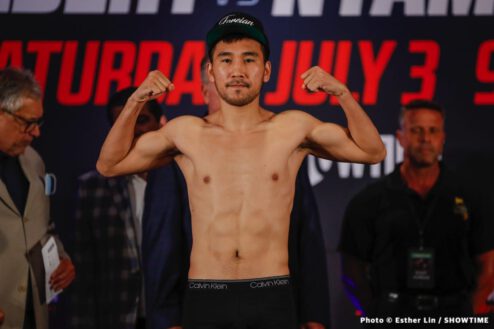 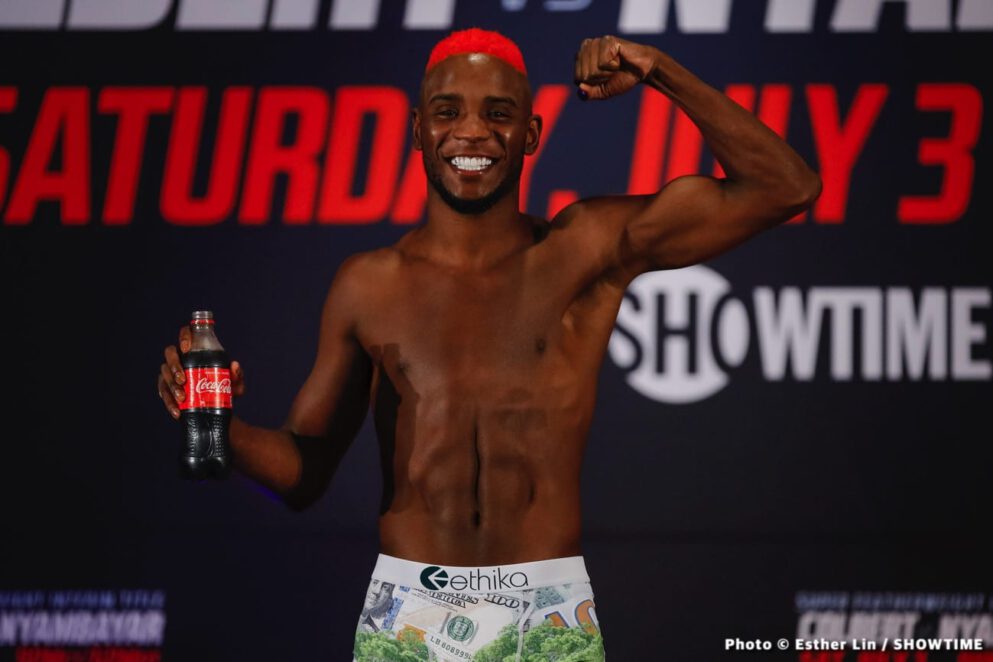 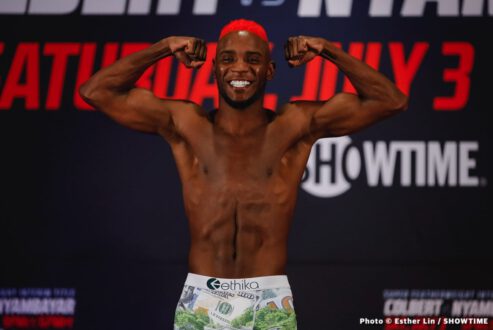 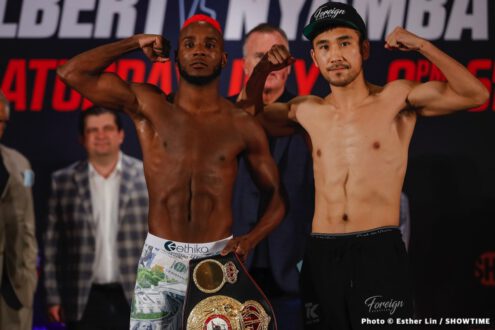 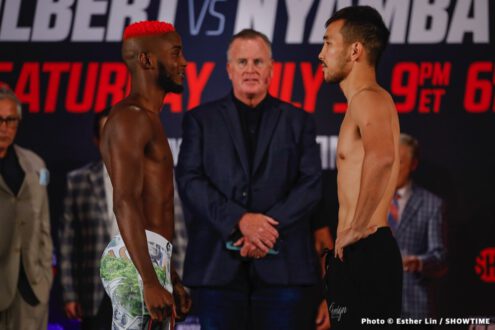