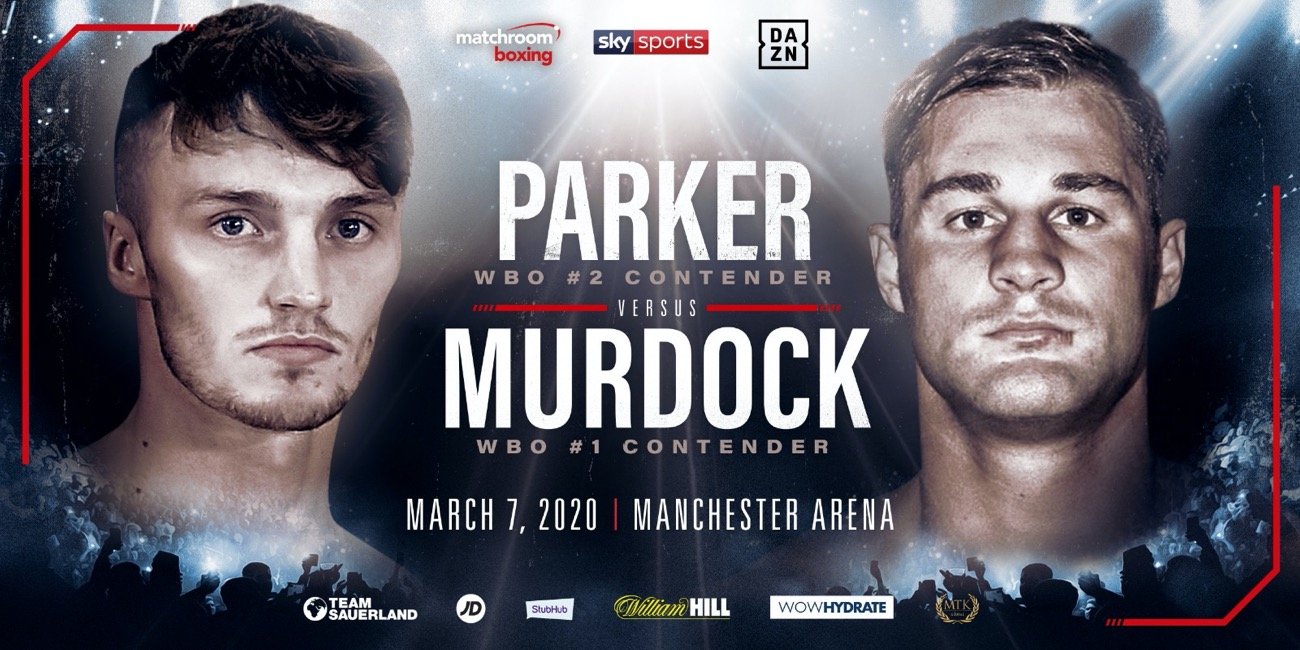 Zach Parker has his sights set on Super Middleweight supremacy as the undefeated former British Champion looks to earn his first World Title shot when he takes on Australia’s Rohan Murdock this Saturday, March 7th at the Manchester Arena, live on Sky Sports in the UK and DAZN in the US.

“This has been the best camp I’ve ever had,” said the Derbyshire boxer. “I’m flying. All my gears are going and I can’t wait to get in there. I’m ready to rock and roll. I’ve had a longer camp this time and I’m in tremendous shape. I’ve been doing some different bag drills and a lot more sparring for this one.

“We’ve had former WBA World Champion Giovanni De Carolis over. It’s been great having someone with that kind of experience. I’ve also been sparring Jason Welborn, Lennox Clarke, Kieran Conway, and a couple of amateurs as well, so I’ve been mixing it up with different lads and different styles.

“I love the Manchester crowd. The stadium is always electric. This is where I fought Adasat Rodriguez on the Groves-Eubank undercard and knocked him out in the second round. It’s going to be good fighting back there again and hopefully I can get another stoppage win to make it two out of two.

“I’ve watched a bit of Murdock but I don’t really watch a lot of my opponents. I usually just concentrate on what I’m doing because every fight is different. He will probably bring a different game plan into this fight so I’ll be ready for whatever style he brings. I expect this to be my hardest fight so far but I’m ready to go. He’s won 24 out of 25 so you know it’s going to be a good fight.

“This is the most important fight of my career so far. He’s number one and I’m number two. We’re both going to go at it to see who can come out on top and get a shot at the title. I’m 100% confident I will be number one after March 7th.”

If successful, Parker will be eyeing a shot at the reigning WBO World Champion Billy Joe Saunders, an all British-showdown he says he would happily accept along with a clash with any of the division’s other top names including Callum Smith and Caleb Plant, or a mega-fight with Mexican superstar Saul ‘Canelo’ Alvarez, who is rumoured to be boxing Saunders for the WBO belt in May.

“Billy Joe Saunders is definitely on my radar,” says Parker. “He’s a good fighter. He’s been there and done it. A two-weight World Champion. That’s the type of fight I want against top-level opposition. I would be open to fighting any of the big names. For me, it’s between Caleb Plant and Callum Smith for who’s best in the division. Callum Smith didn’t look too good against John Ryder, he looked a bit iffy, so I would have to go with Caleb Plant, but I would fight either.

“If Canelo decides to fight Saunders then he could be next for me. That’s the kind of fight you come into boxing for. Fighting under the big lights over in America. That’s a fight I would love and I think I would cause some problems for Canelo because of my awkward style. That’s 100% a fight I would love.”

Parker And Murdock Clash In Manchester on March 7

Zach Parker and Rohan Murdock, the No.1 and No.2 ranked Super-Middleweights with the WBO, will clash at Manchester Arena on Saturday March 7, live on Sky Sports in the UK and DAZN in the US, with the winner eyeing a shot a reigning World Champion Billy Joe Saunders.

Undefeated British Super-Middleweight Champion Parker (18-0, 12 KOs) returns to the ring following his stoppage win over Steven Crambert at the SSE Hydro in Glasgow while Australia’s Murdock (24-1, 7 KOs) fights in the UK for the first time after his WBO Oriental Title win over Rolando Wenceslao Mansilla.

“I’m delighted to be fighting Rohan Murdock,” said Parker. “This is the fight where I arrive at the top level. I’ve had to be patient and it’s been very difficult at times, but we are here now. I’m going to put on a great performance and put the big names on notice that I’m coming.

“I’d personally like to thank my manager Neil Marsh, my coach Errol Johnson and the rest of my team. I’d also like to thank the Sauerland brothers for delivering this fantastic opportunity, and Eddie and Matchroom Boxing for staging the fight. Enjoy the fight everyone.”

“It’s not often that an Australian gets the chance to travel and fight in front of a huge arena crowd,” said Murdock. “I’m very grateful for the opportunity provided by MTK Global and Matchroom Boxing, and I’m excited to soak up the experience.

“I have a lot of respect for my opponent Zach Parker. Parker is a skilled boxer with fast hands. I know I belong at this level and Parker is the perfect opponent to prove that.

“Fans coming to watch me fight can expect to see a boxer who has dedicated his life to the sport with the vision of securing this opportunity. They can expect me to leave absolutely everything in the ring to get the ‘W’ whether that’s using my boxing abilities or making an absolute dog fight, I’ll adapt to whatever is necessary. The Aussie spirit will be on full show.”

Nisse Sauerland, Parker’s promoter, said: “This is the opportunity Zach has been waiting for and one he is going to take with both hands. We’re very happy to be working with Eddie Hearn and Matchroom Boxing to place this fight on a great card at the Manchester Arena. Rohan Murdock is a good fighter deserving of his ranking, but this is Zach’s time to shine. We expect him to steal the show and then the World Title is next!”

“I firmly believe Zach Parker is one of the best prospects in the UK right now but patience has had to be shown to secure the right opportunity and this is here right now,” said Neil Marsh, Parker’s manager. “Zach will shine at the Manchester Arena on 7th March.”

Parker vs. Murdock is part of a huge night of action in Manchester.