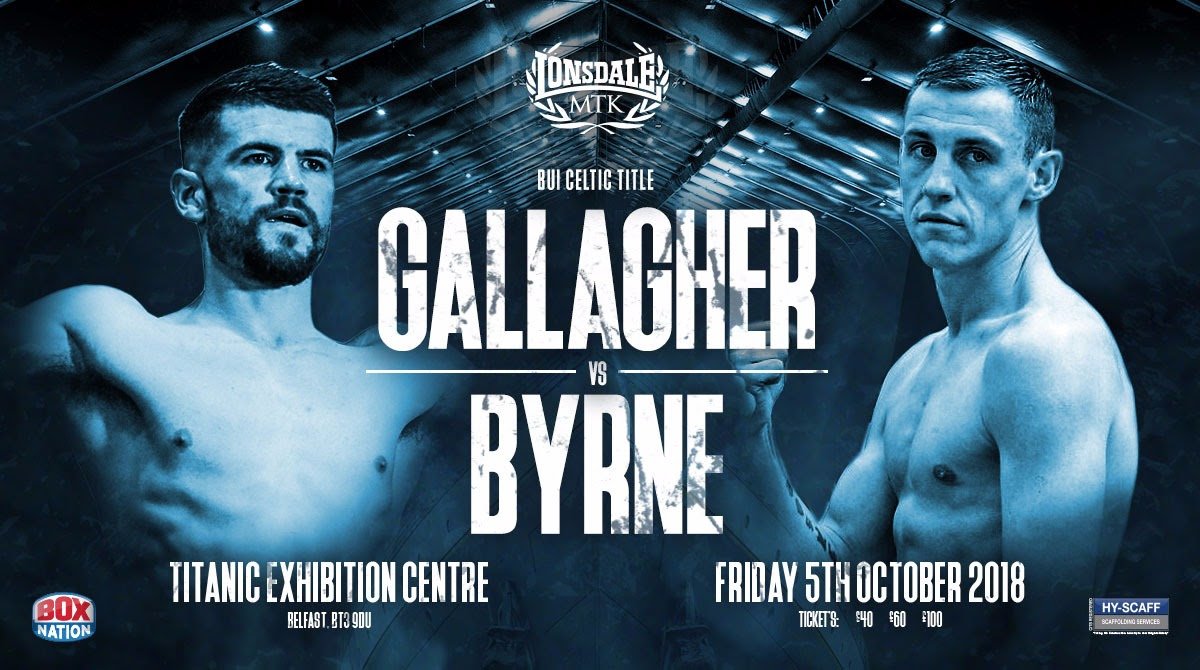 Paddy Gallagher plans to blast his way to the Celtic welterweight title in Belfast on Friday and move on to a shot at the British crown.

Gallagher said: “I’m in top nick. It was a short camp because I was expecting a four or six rounder but now we’ve got the eight rounder. We’ve done the preparation well and it’s all worked out perfectly.

“Jay is capable. He’s only been beaten by good fighters like Josh Kelly, Felix Cash, Anthony Fowler etc and he’s always tested himself. He’s open about it. It’s not like he does anything different to people I’ve fought before.

“Some people are telling me he’s a workhorse but there’s a gap in terms of talent. Everyone knows there is. Because he’s tricky, tough and game, he’s going to be bringing his A-game. It’s a big opportunity for both of us.

“It could be hostile for him. He could get some boos but he’s a likeable fellow and I think he’s got a good following. Maybe he’ll get a decent reception. Whether they’re cheering or booing, you’d rather that than people just being quiet.

“I think it’s the perfect fight for me. Byrne is limited and it should be a win for me. This is a title on the line and it’s good exposure against a guy from Dublin. There are lots of good things about it and I think he’ll bring out the best in me.

“After this, I hope to fight for the British title. I know Gary Corcoran and Johnny Garton are fighting for it. Garton is a nice guy and we’ve always wished each other luck. It’s close to call and I’d love to fight Corcoran. I’d rather fight him because he’s the harder fight.”

‘Pat-Man’ (13-4-KO8) has quickly overcome a broken jaw and goes straight in to a title fight against Dublin’s Byrne (7-5-KO2) on a huge card that also includes Tyrone McCullagh bidding for the WBO European super-bantamweight belt.

Gallagher said: “I think this will be an absolutely cracking fight. I only ever met him once. We occasionally text each other to say ‘good luck’ or ‘well done’ but I can’t wait to get stuck into him verbally as well as physically.

“To be fair to him, he’s already shown a good bit of sportsmanship texting me and wishing me all the best. He’s a credit to boxing and has never shied away from a fight. He’s a bit like myself so we’ll go to town on each other.

“I only ever seem to fight nice guys but this will sell tickets anyway as it’s north against south and there’s a significant title on the line. Byrne has been about and in with some top prospects like Josh Kelly and Anthony Fowler. It’ll be a tough test but of course I’ll do a job.

“My jaw is perfect. It’s been more or less three months exactly. I’ve been training away and now I’m starting sparring. The doctor said it would heal after 10 weeks and we gave it 12. I believe it’s good as ever.

“This show shows how good Belfast boxing is right now. I’ve a good reputation here and people say I’m good to watch. Byrne is tough, durable, experienced and as game as a badger. You’ve also got McCullagh and Kennedy who are both unbeaten fighting for the European title, David Price and a host of local talent.”