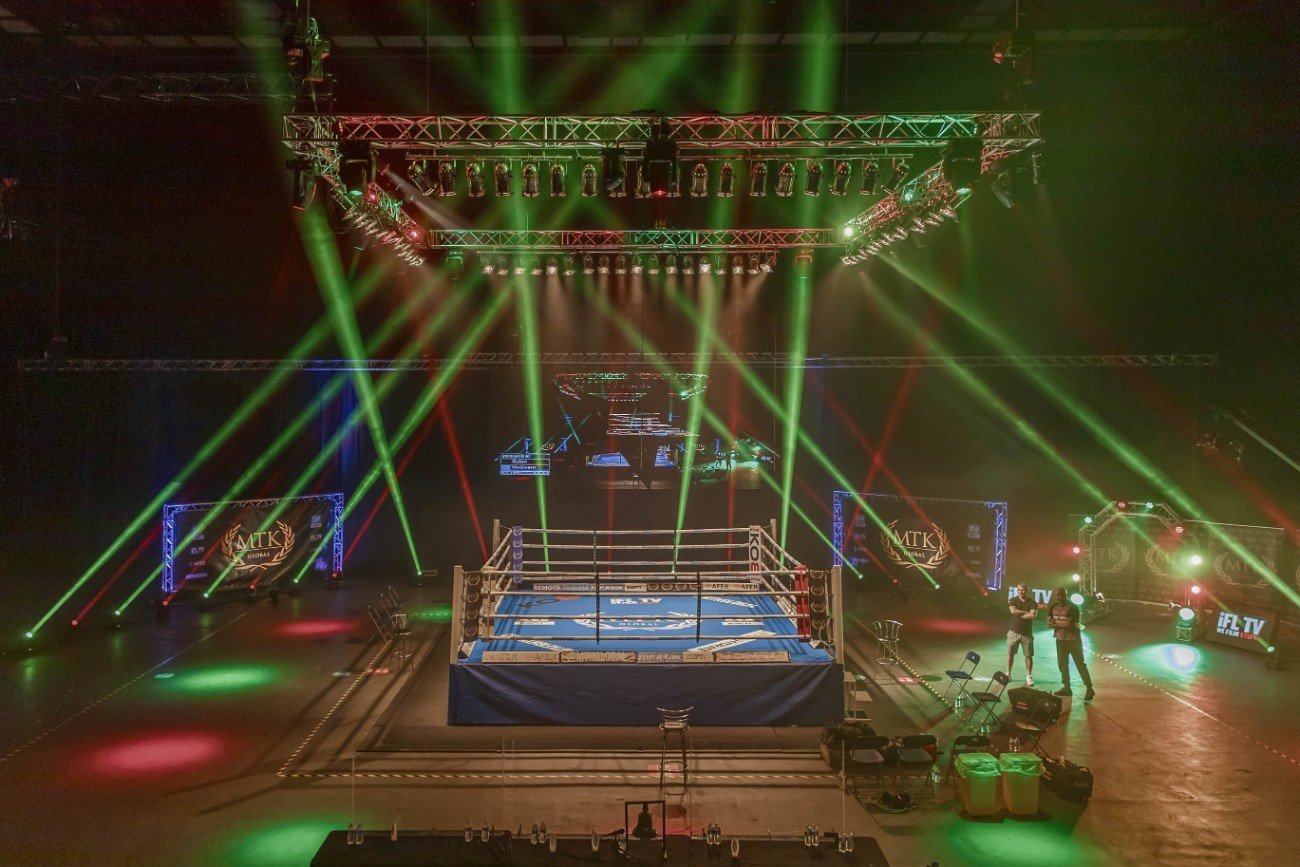 Tursynbay Kulakhmet: I want to challenge for a world title in the next 12 months

Tursynbay Kulakhmet has vowed to challenge for a world title in the next 12 months – but knows he must get past Macaulay McGowan first when they meet for the WBC International super-welterweight title on tomorrow’s action-packed #MTKFightNight.

In just his second professional fight, highly-rated Kulakhmet (1-0, 1 KO) faces unbeaten McGowan (14-0-1, 3 KOs) on the huge show at Production Park Studios in Wakefield on Wednesday, live in the US on ESPN+ in association with Top Rank, and worldwide on IFL TV.

The Kazakh superstar has big ambitions as a professional, as he has already set his sights on fighting for a world title by the end of 2021, provided he can get past McGowan first.

Kulakhmet said: “By this time next year I want to be a world title challenger. First I have to beat Macaulay McGowan and then I will be one step closer to my dream.

“He hasn’t fought for a while, but I don’t think it gives me an advantage. We are professionals, and when we have the fight dates we train very hard.

“I am really looking forward to this fight, and when I go to ring I will play my game and he will understand what I am all about after a few punches.”

Macaulay McGowan insists Tursynbay Kulakhmet has made a big mistake by fighting him ahead of their battle for the WBC International super-welterweight title on Wednesday’s huge #MTKFightNight.

It sees Kulakhmet facing a big step up in just his second professional fight, and McGowan is determined to spoil the party for the Kazakh.

McGowan said: “He was a good amateur and obviously wants to fast track to world titles as that seems to be a common theme with top amateurs turning professional, but he’s made a mistake fighting me. I expect a technical battle at first but once I’ve got to grips of him, I’ll go through the motions and do a job on him.

“I’m being pretty much written off for this one, but I know what I’m about and that’s all that matters. There’s no doubt in my mind that I’ll win.

“I was looking to fight at welterweight and was about to make it but then this got offered to me at the weight above. It wasn’t a problem as by having a few pounds to play with I can add more fuel.

“I look and feel more like a well-rounded healthy athlete so I’m enjoying it. At the end of the day you either take your opportunities or you don’t, I choose to take it regardless of weight.

“I was 14 stone starting to get my weight off in May, and I had this vision that somehow I’ll get myself back into the mix and finish the year with a nice title and a world ranking. I now have that chance.”

Irish sensation Paddy Donovan has set himself the target of becoming world champion within three years – ahead of his battle with former Southern Area champion Jumanne Camero on next month’s huge #MTKFightNight event.

Limerick hero Donovan (4-0, 3 KOs) will face Camero (10-6, 3 KOs) at Production Park Studios in Wakefield on Wednesday 11 November, live in the US on ESPN+ in association with Top Rank, and worldwide on IFL TV.

Donovan has looked superb since making his debut in October 2019, and the 21-year-old has some big ambitions in mind prior to the toughest test of his career so far against Camero.

Donovan said: “My aim is to win a world title by the age of 24, which is in 3 years time, so I want to move nice and fast and build my record.

“I don’t want to go up against guys I’m supposed to knock out, I want to do so against good fighters that will bring the very best Paddy Donovan out of me.

“I’m starting to get a lot of people talking about me. Coming up to my last fight there was nobody in Ireland that wanted to to spar me at my weight class, and then I was very pleased with the win I got over Des Newton and the fashion I did it in.”

Jumanne Camero: Paddy Donovan has bitten off more than he can chew

Former Southern Area champion Jumanne Camero has warned Paddy Donovan that he may have bitten off more than he can chew ahead of their showdown on next week’s #MTKFightNight event.

Camero (10-6, 3 KOs) takes on undefeated Donovan (4-0, 3 KOs) at Production Park Studios in Wakefield on Wednesday 11 November, live in the US on ESPN+ in association with Top Rank, and worldwide on IFL TV.

It’s the biggest step up of Donovan’s career so far, and after the Irishman made his world title ambitions known last week, Camero has fired back with a warning of his own.

Camero said: “He and most people think he is the real deal. He obviously has had a great deal of amateur fights and will be bringing a lot of skill to the table.

“I think he is ready for a step up and I like that he doesn’t just talk about doing it but is also walking the walk. That said, I think they have bitten off a little more than they can chew. If he’s as good as he’s being touted then this will be an exhilarating fight.

“He’s talking about being a world champion by 24, and a statement like that was certainly thought prior to him fighting me. It’s nothing more than adding a timeframe to it, but if is overlooking me then it would only be in my favour.”

Undefeated sensation Paddy Donovan will have a big step up in competition as he takes on former Southern Area champion Jumanne Camero on next month’s huge #MTKFightNight event.

Donovan (4-0, 3 KOs) will face Camero (10-6, 3 KOs) at Production Park Studios in Wakefield on Wednesday, 11 November, live in the US on ESPN+ in association with Top Rank, and worldwide on IFL TV.

Limerick hero Donovan had looked superb in his career so far, racking up three knockouts in four wins, with the most recent of those coming in August when he needed just 91 seconds to earn a first-round knockout victory over Des Newton.

He now turns his attention to Camero, who won the Southern Area lightweight title back in 2017, and Donovan is pleased about the step up.

Donovan said: “I’m really excited to be back in the ring, and especially on an MTK Global show. They always put on world-class events with world-class fighters, and that’s where I want to be fighting.

“Jumanne Camero seems to be a decent fighter with 10 wins from 16 fights, and he will be my toughest challenge to date. My training is going really well, and I’m feeling perfect. I’m sure his style of fighting will bring the best out of me, and I’ll put on one hell of a show come November 11th.”

Promoter Lee Eaton added: “We’re delighted to be working with our friends at Top Rank to get Paddy Donovan on our huge show next month. He’s had a perfect start to his career, and now faces a big test against Jumanne Camero.

“Donovan looks destined for big things in the sport and has a great trainer in his corner in Andy Lee. Camero is a former Southern Area champion, though, so it’s set to be an inspiring fight.”

Kazakhstan superstar Tursynbay Kulakhmet will have his first fight in the UK next month, when he takes on undefeated Macaulay McGowan for the vacant WBC International super-welterweight title on a huge #MTKFightNight.

Kulakhmet (1-0, 1 KO) faces McGowan (14-0-1, 3 KOs) on Wedesday 11 November at Production Park Studios in Wakefield, live in the US on ESPN+ in association with Top Rank, and worldwide on IFL TV.

Following an incredible amateur career, Kulakhmet had a successful professional debut in August, when he defeated Sagadat Rakhmankul by fourth round stoppage in Almaty.

In just his second professional contest, the Kazakh sensation will now challenge for the WBC International title, going up against Wythenshawe boxer McGowan, who is unbeaten in 15 professional fights.

“Kulakhmet wanted a big fight for his UK debut, and it shows just how highly-rated he is that he is competing for the WBC International title in just his second professional contest.

“It’s a tough challenge for him against McGowan, who feels he has a point to prove and will be coming to win. I’m extremely excited to see how this unfolds, and fans are certainly in for a treat with this showdown.”

It’s been an emotional period for McGowan, after his son Albie was born and diagnosed with HIE last December, and the 25-year-old has opened up on how the past year has been for him, his partner and his daughter, since his son was born.

McGowan said: “There’s been some heart wrenching moments, and me and my partner have found ourselves in situations we would never imagined when we we first started dating as 15 year old schoolkids, but it’s definitely made us stronger as a individuals and as a family unit.

“In a weird way, I’ve had to accept what’s happened and learn to love it and try to become a better person for it. In all walks of life, the lessons I’ve learnt, the situations I’ve been in, I can use these and transfer them to help me with boxing.

“It helps my mindset, how I now prepare, and what’s important and what’s not. I remember David Silva saying when his son was ill, a lot of the lessons he found himself learning helped him in football. They helped make him a better person by putting a lot of things in perspective thus making him a better athlete.

“I would be lying if I didn’t admit through some dark times in training some thoughts and emotions have helped me through, especially the way my daughter Florence has dealt with everything.

“The things she’s had to experience and feel, the way she’s had to handle things as a 3-year-old, she’s the epitome of everything for me. I’m extremely proud of her more than anything.”

Kazakhstan superstar Tursynbay Kulakhmet has vowed to mark his UK debut in style on Wednesday’s action-packed #MTKFightNight – promising a top-level performance when he fights Macaulay McGowan for the WBC International super-welterweight title.

In just his second professional fight, highly-rated Kulakhmet (1-0, 1 KO) faces unbeaten McGowan (14-0-1, 3 KOs) on the huge show at Production Park Studios in Wakefield next week, live in the US on ESPN+ in association with Top Rank, and worldwide on IFL TV.

It gives Kulakhmet a fantastic chance to introduce himself on a big stage and secure a world ranking, and the 26-year-old plans on taking full advantage.

Kulakhmet said: “I’m excited to fight on this MTK Fight Night card. It’s a big opportunity for me to show the UK fans who I am in boxing.

“My debut fight was interesting in my country because my opponent was a three-time champion of Kazakhstan and had good experience in professional boxing, but I showed my skills.

“I know a lot of guys in the UK, but I don’t know much about McGowan. I watched his fights on YouTube, and I will show sharp, classy, high quality boxing that I hope all of my fans will enjoy.”