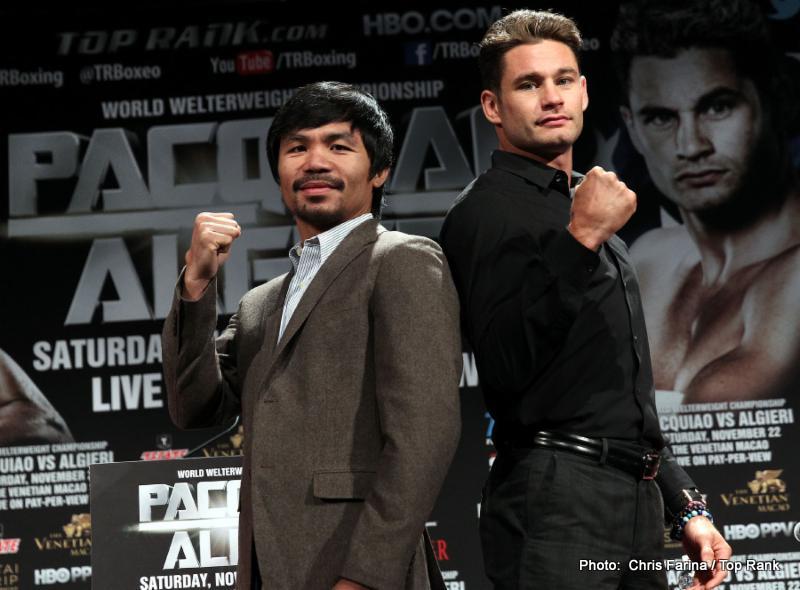 Sept. 3, 2014, Los Angeles,California — “DAY 10” — (L-R) Superstar Manny Pacquiao and New York’s undefeated (20-0) WBO Jr. Welterweight champion Chris Algieri pose during a press conference in Los Angeles on ‘Day 10’ of their worldwide tour. Pacquiao jokingly got up on a chair to make up for the slight height difference.

Pacquiao and Algieri , along with their respective trainers Freddie Roach and Tim Lane, promoters Bob Arum, Joe DeGuardia and Artie Pelullo, and Ed Tracy, President and CEO of Sands China Ltd., are on a 27,273-Mile Media Tour, that began on Monday, August 25 at The Venetian Macao. The 12-day tour includes press conferences or public and private appearances scheduled for Macau, Shanghai, San Francisco, Las Vegas, Los Angeles and New York.

“This press tour has been a wonderful ride and it has helped me grow as a person and a champion. I’d like to thank Team Pacquiao. It’s been fun to see how the elite level operates in this business. We’ve got two champions fighting each other. It’s not something you see very often, especially nowadays you see a lot of guys trying to hold on to their records, hold on to their titles and we’re not afraid to fight the best. I think we need more guys in this sport doing that who aren’t afraid to take challenges and take risks.”

“You saw Algieri’s last fight against Ruslan Provodnikov. He showed his toughness and he fought good so he deserves this fight. I don’t want to underestimate my opponent. I have to prepare myself 100%. It’s been a while since the fans of Manny Pacquiao have seen the killer instinct like when I fought Cotto, Margarito, de la Hoya, Hatton, and that’s what I’m trying to show in this fight. All I can say to his team is train hard and I will train hard so that we can give a good fight and we can entertain people.”