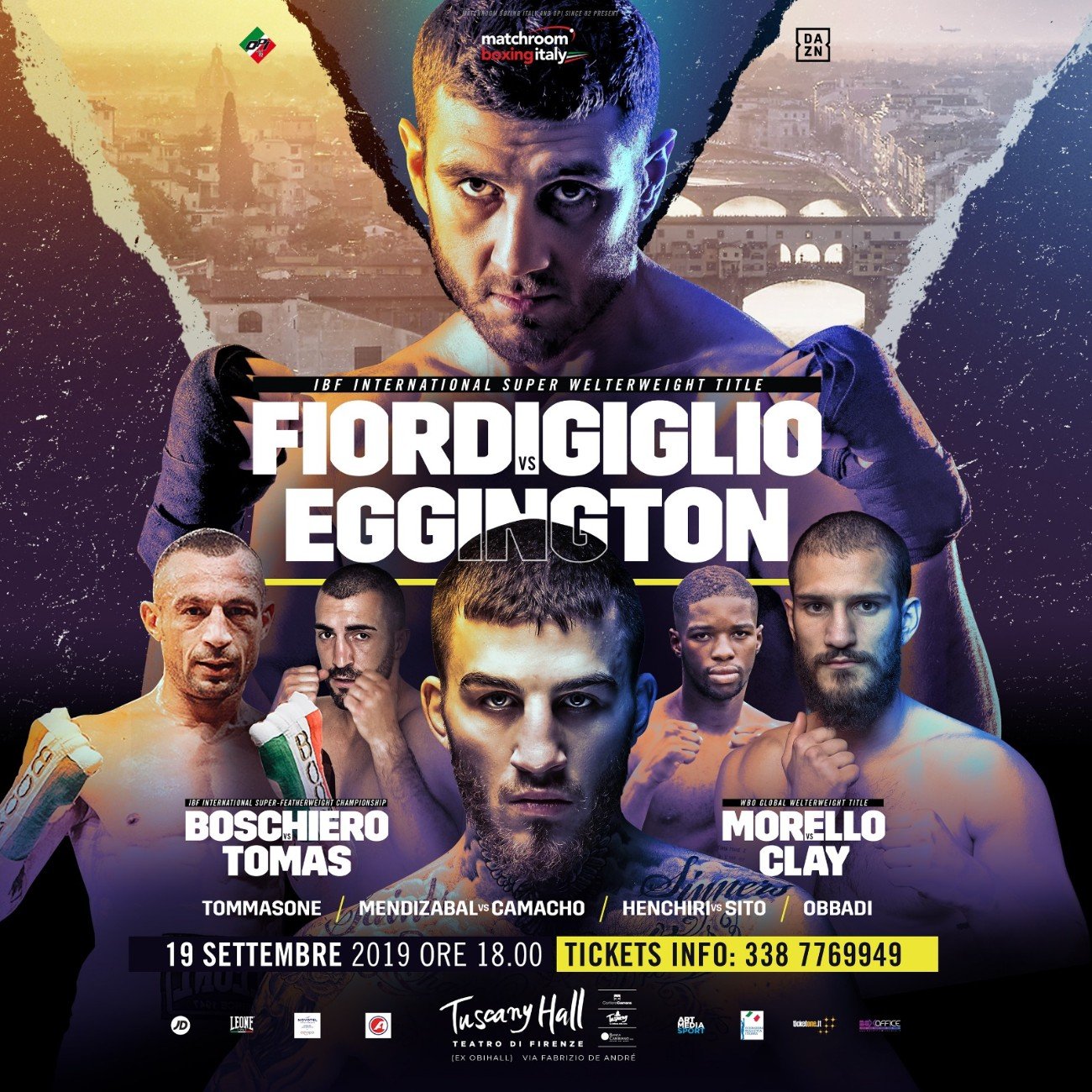 On September 19 at Tuscany Hall in Florence, Italy, IBF International super welterweight champion Orlando Fiordigiglio (Italy, 31-2 with 13 KOs) will defend against Sam Eggington (U.K., 26-6 with 15 KOs) on the 10 rounds distance. The event is promoted by Opi Since 82, Matchroom Boxing Italy and DAZN which will stream it live. That’s what the champion and the challenger had to say about each other. .

“I didn’t see Fiordigiglio’s fights – said Eggington – as I never watch my opponent’s videos. That’s my coach’s job. At this level there are no easy fights anyway. I’m well prepared as I already fought four times this year, the last time in August on the 6 rounds distance, and I’m always in the gym. I’m ready for Fiordigiglio and I want to win the IBF International belt.” Sam Eggington became very famous after he stopped former world super lightweight and welterweight champion Paul Malignaggi in 8 rounds. That’s what he said about it and about his other most famous fights: “I grew up watching Malignaggi’s fights and in the first 3 or 4 rounds I couldn’t believe to be in the ring against him. Then I started to fight as usual. I wasn’t looking for the knock out, but when I saw an opening I hit him with a left hook to the body and a straight right to the face and he went down. My hardest win was against Dale Evans, on points after 12 rounds. I was defending two welterweight belts: Great Britain and British Commonwealth. The win that gave me most satisfaction was against Frankie Gavin because we are both from Birmingham, the fight took place in our city in front of our fans and back then he was a very big name. I stopped him in 8 rounds.”

That’s what Orlando Fiordigiglio thinks about his challenger: “Sam Eggington is the classic British fighter who comes forward and throws many punches. He likes to brawl. I’m ready for him. My trainer Meo Gordini found the right strategy to beat Eggington. My coach needs only a few minutes to understand a fighter’s style, his strengths and his faults. The last fight against Stephen Danyo was very tough because he did something that he never did before: he attacked me from the opening bell. I had seen videos of Danyo’s fights and talked to Italian fighters who knew him: Danyo is a counterpuncher who lets his opponent come forward. He didn’t do that when we fought so the strategy studied in the gym became useless, but I was ready to brawl and I won the fight and the IBF International super welterweight title.”