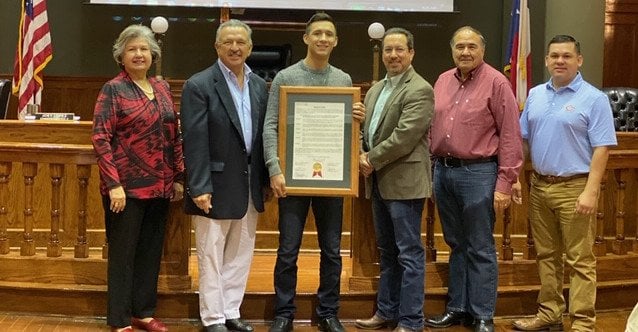 Undefeated super lightweight sensation, Omar “El Relámpago” Juarez continues to collect victories in the ring, along with accolades and recognition for his social work from locally elected officials. This past Saturday Omar won his 6th professional boxing match by knockout to improve his record to (6-0, 4 KOs). His professional boxing career is on track to eventually lead to contender status within the next year or two and the whispers on this subject are growing louder.

On Tuesday, November 26, Omar received a Proclamation of Recognition from the Cameron County Commissioner’s Court. Omar was recognized and appreciated for his work at the schools in Brownsville where he presented his speeches about the Six Principles for Achieving Goals. Thousands of students have heard Omar as he eloquently expressed the importance of applying hard work and ethical values to achieving goals. In the last six months, he has received recognition’s from The City of Brownsville, The City of San Benito, The Texas State Senate, and The Texas House of Representatives.

“It’s an honor to be recognized by the Cameron County Commissioner’s Court for my efforts in and out of the ring,” said Omar Juarez, who is a motivational speaker. “I’m going to continue to be a positive role model and strive to make this world a better place. I’m truly grateful for all the support from my community.”

As if these honors weren’t enough, he was summoned to the office of United States Congressman Filemón Vela who was home for the holidays from his office in Washington DC. Congressman Vela asked Omar if he would accompany him to help the migrant camps on the border and eventually serve as a spokesman that could raise awareness to the plight of these people. Omar has also been approached by other charitable organizations including “By the Border”, Monica’s House, and the Brownsville Community Incentives Corporation to serve as their spokesman.