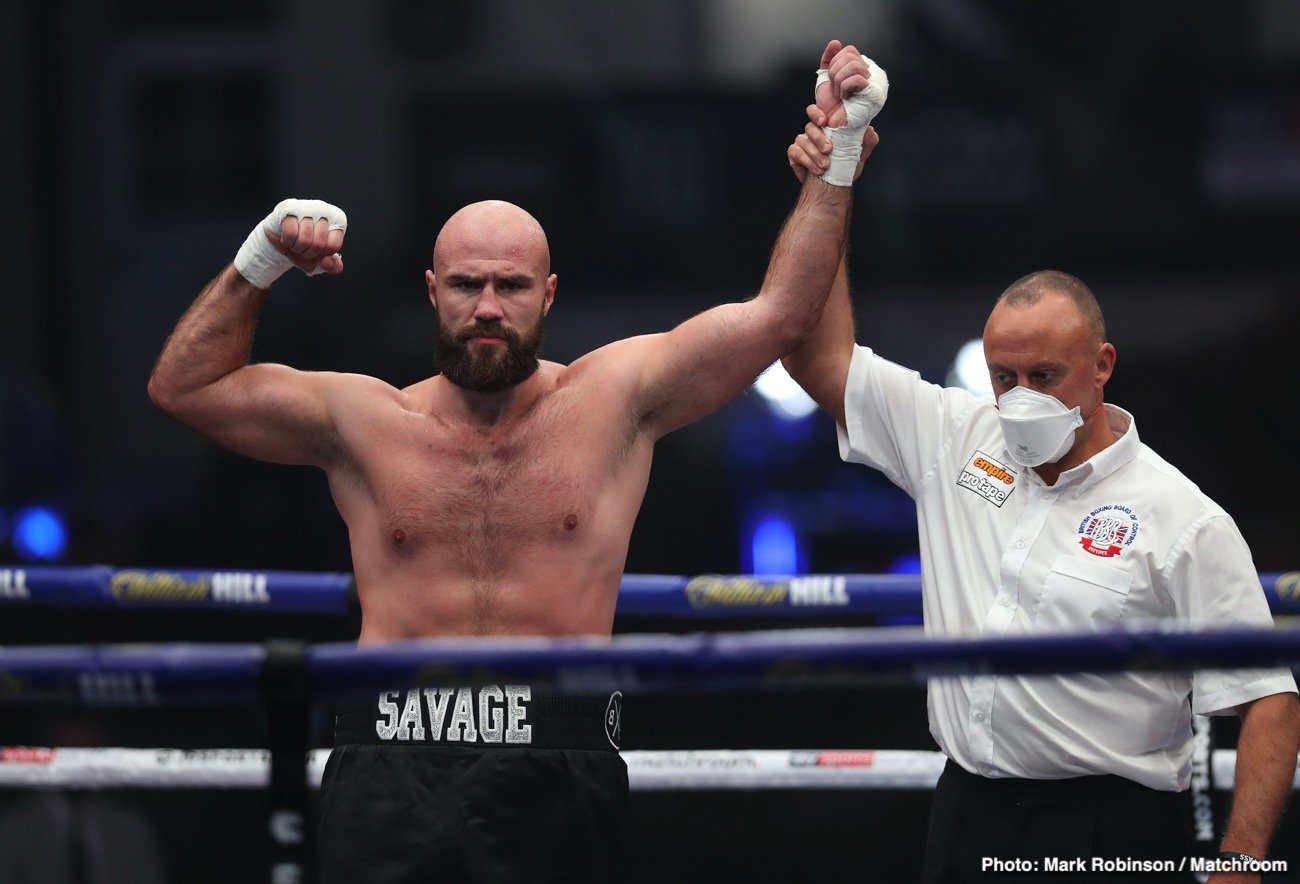 Alen Babic is promising to deliver another savage knockout when he meets Ireland’s Niall Kennedy over eight rounds on the Joshua Buatsi vs. Marko Calic undercard on Sunday October 4, shown live on Sky Sports in the UK and DAZN in the US.

The Dillian Whyte-backed Croatian (4-0, 4 KOs) enhanced his growing reputation as ‘The Savage’ by destroying American Shawndell Winters in two rounds on the Matchroom Fight Camp finale last month, and the 29-year-old is out to impress again in what will be his third outing in the UK next week.

“I’ve missed being ‘The Savage’, he wants to see blood,” said Babic. “He’s crazy, he’s not normal. Life has changed dramatically following my win over Shawndell Winters. I’ve gone from being an unknown guy to a guy that is getting mentioned with the top names in the division. It’s crazy.

“I only heard about Niall Kennedy when it was announced – I’d found out about an hour before. Dillian knows that I don’t care who I fight. I will fight anyone. I told him to pick whoever he wants, and I will destroy them. I don’t see myself having any problems with these guys until I get into the top ten or five.

“They sent me the name, I searched him and he’s like 102nd in the world, that’s okay. He is not that known. He is a good fighter actually. He’s a good boxer but I’m not going to play that game with him. I’m going to play my game. He says I’m a loudmouth. That’s beautiful, I like that! I really like that because it is going to be easier to wake up ‘The Savage’.

“He’s going to know that he’s in deep waters with me. He had a fight a year ago and he lost by knockout, to some guy that I would knockout in one round. I don’t think he has anything to trouble me with. He’s too slow. I’m not saying bad shit about him, but I think his best days are numbered. He’s done now and I’m just starting out. I’m going to operate on him like a surgeon.

“I don’t think anyone sees Niall beating me. I don’t think even Niall thinks he will beat me. I want him to think he will, but I just don’t see it. He isn’t a knockout artist, he doesn’t have the punch power. Niall will be in deep waters that he won’t be able to control. I’m not going to let him breathe. It’s not going to be a boring fight. Tune in because it’s going to be a huge KO.”

Irish Heavyweight Niall Kennedy has landed a golden opportunity to jumpstart his career after securing an eight-round fight with Alen Babic on the Joshua Buatsi vs. Marko Calic undercard 4, shown live on Sky Sports and DAZN.

Kennedy’s hopes took a significant blow last year when he suffered the first defeat of his career to American Devin Vargas at the MGM Springfield, with the referee stopping the fight in the fifth round after the Gorey boxer suffered several crucial blows.

The 36-year-old (13-1-1, 8 KOs) leaped at the chance to share the ring with ‘The Savage’, who’s stock in the Heavyweight division rose dramatically following his emphatic two-round destruction of Shawndell Winters on the final weekend of Matchroom Fight Camp.

Croatia’s Babic has warned that he alter ego will continue to cause havoc in the Heavyweight division and has set his sites on a showdown with his countryman Filip Hrgovic. Still, Kennedy, a garda in Wicklow, insists that he has nothing to fear when it comes to facing the former doorman.

“He has gone about his business in his way,” Kennedy told Seconds Out. “He’s going about it loud, alright! He likes talking. He’s a promoter’s dream. He’s doing well, and he’s stopping his opponents. He’s getting rid of everyone very quickly, but he hasn’t fought a big man yet.

“I’m not a massive Heavyweight, but I’m a big man compared to what he’s fought so far. I think he thinks I’m turning up for a payday. I’m looking at Alen Babic as a way to get to more significant paydays.

“He presents an opportunity for me to showcase my skills in England. He is what he is, a loudmouth. You can’t argue with what he’s done so far; he’s been excellent.

“It’s a fantastic chance for me to showcase what I can do. I’m not a fool; my last fight was a loss. Those close to me know why it was a loss and how it happened. A loss is a loss no less, and it’s on my record as an L. This is an excellent opportunity on a big stage to fix that.

“He’ll need to prove things to himself. He’ll have to go through the trenches that night, and he’ll ask himself questions. I’ve already answered a lot of the problems that he’s in doubt about. Big 18 stone Heavyweights have hit me.