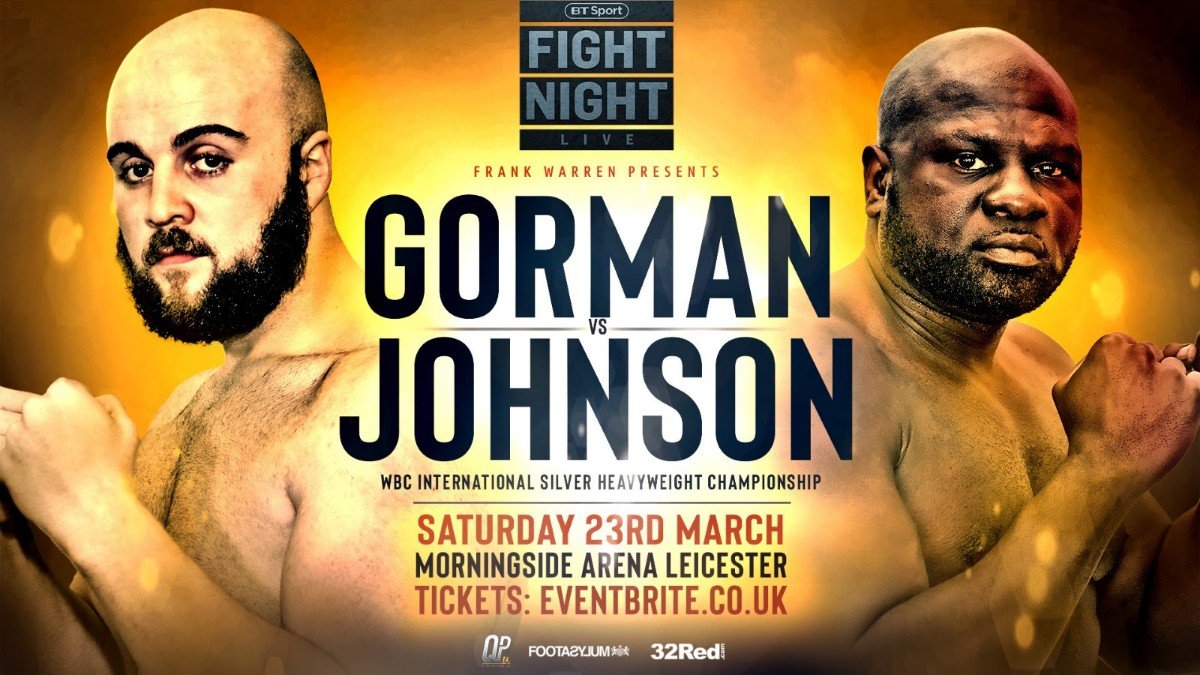 NATHAN GORMAN WILL now take on the venerable American Kevin ‘Kingpin’ Johnson at the Morningside Arena in Leicester on Saturday, live on BT Sport.

Heavyweight contender Gorman has, unfortunately, been victim of late withdrawals of opponents this week, while the veteran Johnson was also due to have his first fight of the year but suffered an opponent withdrawal.

They will now face each other and the match represents a return to the Morningside Arena for the 39-year-old, who fought in Leicester last year, taking Daniel Dubois the full 10-round distance.

Johnson, with 47 fights to his name and 34 wins, has a resume that features a ‘Who’s Who’ of heavyweight boxing, with him having shared a ring with the likes of Vitali Klitschko, Tyson Fury, Christian Hammer, Dereck Chisora, Manuel Charr, Anthony Joshua, Kubrat Pulev, Filip Hrgovic and Daniel Dubois with only Joshua forcing a stoppage in his 13th fight back in 2015.

Gorman can now look to return the compliment to Dubois, who recently stopped his last opponent Razvan Cojanu in the second round, by making a similar statement against Johnson, who forced the young Londoner to rely on the scorecards.

Since turning professional in December 2015, Gorman has become holder of the WBC International Silver title and is regarded as one of the most promising prospects in world heavyweight boxing.

Promoter Frank Warren has made it public that the 22-year-old is just a few fights away from a collision with fellow young heavy Dubois, with the fight expected to take place before the end of the year.

Both must remain in winning ways and the pupil of Ricky Hatton first has to overcome his American assignment.

“Probably the most durable heavyweight in the world is old Kingpin, isn’t he?” responded Gorman to news of his new opponent. “He seems to have been in with everyone so it only seems right that I should fight him too because it will be another experience and another style.

“I know I have been training for a different style and have only had four or five days to prepare for it, but it will be another box ticked.”

Gorman was fully intent on delivering a showreel KO in his first fight of the year, but realises the probability has diminished with Johnson being drafted in, but there remains the incentive of attempting to out-do his domestic rival.

“It will be very hard with him because he can be very defensive and only two people have stopped him. It will probably be a hard night’s work but only time will tell and I’ve just got to stick to my boxing and do the business. I need to get the win, first and foremost, and come out unscathed and healthy.

“Of course that is the aim to better the outcome of Daniel, obviously. I’m not going in there to do the distance and I want to get him out of there, but I’ve just got to let my boxing do the talking.”

Gorman takes on Johnson at the Morningside Arena in Leicester on a bill that features the British super featherweight title clash between the champion Sam Bowen and Scot Jordan McCorry. CJ Challenger and Kyle Haywood fight for the vacant Midlands Area super welterweight title takes place on the same bill. Among the other stars in action include Sam Maxwell, Tommy Fury and Willy Hutchinson.

Tickets are available from £40 are on sale NOW via Eventbrite