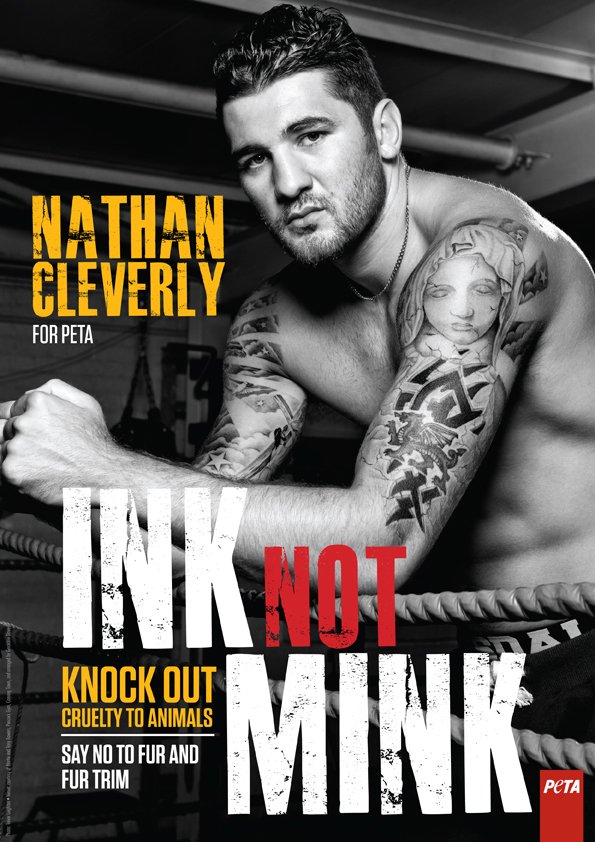 In the lead-up to his cruiserweight debut against Guyana’s Sean Corbin on 17 May, Welsh boxer and former world champion Nathan Cleverly stars in a brand-new PETA ad that proclaims, “Ink, Not Mink”. The new campaign, which was shot by top celebrity photographer Trevor Leighton, goes on to say, “Knock Out Cruelty to Animals. Say No to Fur and Fur Trim”. The advert can be seen here.

“As a boxer, I face my fears whenever I step into the ring, but I still can’t imagine the fear an animal experiences as they’re beaten and skinned alive for their fur”, Cleverly says. “I hope my PETA campaign gets people to pause and think before buying fur.”

Animals on fur farms spend their lives in cramped, filthy cages before they are drowned, beaten, strangled, electrocuted or skinned alive. Animals caught in the wild can languish in steel-jaw traps for days, and mothers will even chew through their own limbs in an attempt to return to their cubs. For these reasons, many top designers – including Ralph Lauren, Stella McCartney, Tommy Hilfiger, Calvin Klein and Vivienne Westwood – refuse to use fur in their collections.

With 26 wins out of 27 fights, Cleverly – named the fastest-rising boxer in his weight class – has held a variety of top light-heavyweight titles, including commonwealth, British, European and world champion. He has also lived up to his name in the academic world: in 2010, he completed his degree in mathematics at Cardiff University.

For more information or to view the ad, please visit PETA.org.uk.