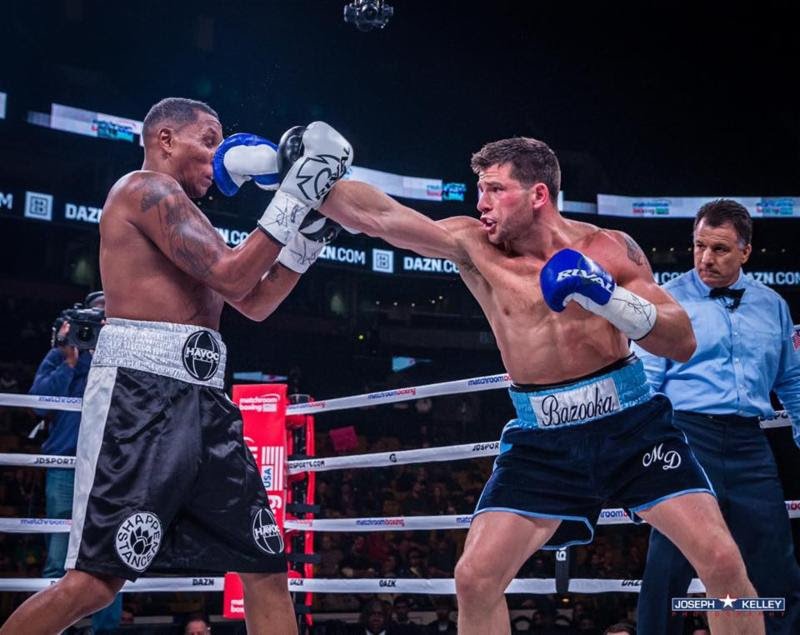 Murphys Boxing is proud to announce their 4th Annual St. Patrick’s Day Clash will take place on Saturday, March 16th once again at the House of Blues in Boston.

Headlining the stacked card will be Whitman, Massachusetts’ Mark DeLuca (22-1, 13 KOs). The current NABA Super Welterweight Champion, is ranked #10 in the world by the WBA and will defend his title against Connecticut’s Jimmy Williams (16-1-1, 5 KOs) in an all New England 10 round battle.

DeLuca is coming off the highest profile win of his career this past October when he fought on the undercard of Demetrius Andrade’s world title fight at TD Garden which was shown worldwide on DAZN. DeLuca won a unanimous decision in what was an immediate rematch of the only blemish on his record, a split decision loss to Walter Wright, considered by most in attendance to be a robbery. Now DeLuca finds himself, not only one of the most popular fighters in New England, but also in contention for a world title shot later this year.

“Being in the Top 10 now, I know that I’m only a phone call away from a life changing opportunity.”, explains the former Marine turned title contender.

“I’m always in the gym. I’m staying focused. I know I need a good performance against Williams to keep that opportunity alive.”

Having already headlined a Murphys Boxing event on St. Patrick’s Day, DeLuca is well aware that it isn’t the average boxing card.

“St. Patrick’s Day. Boston. Dropkick Murphys. What more can you say? The atmosphere is electric.”

In the co-main event, one of boxing’s favorite characters, Gary ‘Spike’ O’Sullivan (29-3, 20 KOs) will make his return to Boston, where he has amassed a huge following, to take on Worcester, Massachusetts’ Khiary Gray (16-4, 12 KOs) in what promises to be an action packed 8 round battle.

The Cork, Ireland native who is promoted by Murphys Boxing in association with Golden Boy Promotions has moved down to the junior middleweight division where he is looking to make a splash in 2019 after finishing last year with a unanimous decision victory in his home country against the 40 fight veteran, Gabor Gorbics.

“Boston is a home away from home for me.”, says the outspoken, handlebar mustached slugger who has fought in the New England area 10 times.

“Murphys Boxing Saint Patrick’s Day events are not to be missed. The crowd is insane and I’m coming to give them what they wanna see… a fight!”

The night will also feature a who’s who of New England’s hottest young contenders and prospects.

Murphys Boxing’s Charles Foster (17-0, 8 KOs) will put his NABA Light Heavyweight Championship title on the line in a 10 round bout against Chicago’s Mike Jimenez (22-1-2, 14 KOs).

The New Haven, Connecticut based Foster is a world ranked contender (#10 in the WBA) and is fresh off a national television appearance last year when he beat the previously undefeated, Alvin Varmall, Jr. on Showtime. He will face one of his toughest challenges yet against the dangerous, power punching, Jimenez whose only loss came to two-time world title challenger, Jesse Hart.

Revere, Massachusetts’ favorite son, Travis Mazac Gambardella (5-0-2, 2 KOs), who trains out of the popular, KnuckleHeadz Gym in Ventura, California, will return home to try and extend his undefeated record against fellow Boston area fighter, Maceo Crowder (2-2, 1 KO) in a 6 round middleweight contest.

South Boston’s Joe Farina (4-1, 3 KOs), who last fought against Gambardella, dropping a razor close majority decision on the undercard of Demetrius Andrade’s middleweight title fight at TD Garden, will look to get back in the winning column in a four round welterweight rematch against New Jersey’s Steve Moore (1-6, 1 KO) who lost a split decision to Farina last year.

In keeping with the holiday’s theme, there will be an all Irish grudge match when Lucan, Ireland’s John Joyce (7-0, 4 KOs) travels to America to take on Cork, Ireland’s Noel Murphy (12-1-1, 2 KOs), who is now based in New York City, in an 8 round welterweight clash that has Irish pride on the line.

The night will be kicked off by the highly anticipated professional debut of Mansfield, Massachusetts welterweight, James Perella. The decorated amateur fighter will turn pro against Woburn, Massachusetts’ Bruno Dias (0-5) in a 4 round contest.

“The St. Patrick’s Day Clash is my favorite promotion of the year and one that our fighters and fans really look forward to.”, explains, Murphys Boxing founder and Dropkick Murphys frontman, Ken Casey.

“The atmosphere that’s created when you put boxing on in a general admission, standing room only concert venue, let alone on St. Patrick’s Day in Boston, creates a unique and intense experience.”

As for the incredibly busy and successful year the promotional company is coming off of, Casey, who will also play 4 consecutive shows with Dropkick Murphys the same week at the same venue, is even more excited about what the new year holds.

“2018 was a breakout year for Murphys Boxing but with contenders like Mark DeLuca and Charles Foster in the position for world title shots later this year and a slew of undefeated prospects on the verge of world rankings, not to mention multiple cards already planned, 2019 will take Murphys Boxing to a whole new level.”

Read: Tevin Farmer: “Carroll has been talking crazy so I picked him and am going to beat his a**”
Read: Anthony Yarde faces Travis Reeves on Feb.23
Follow @boxingnews24