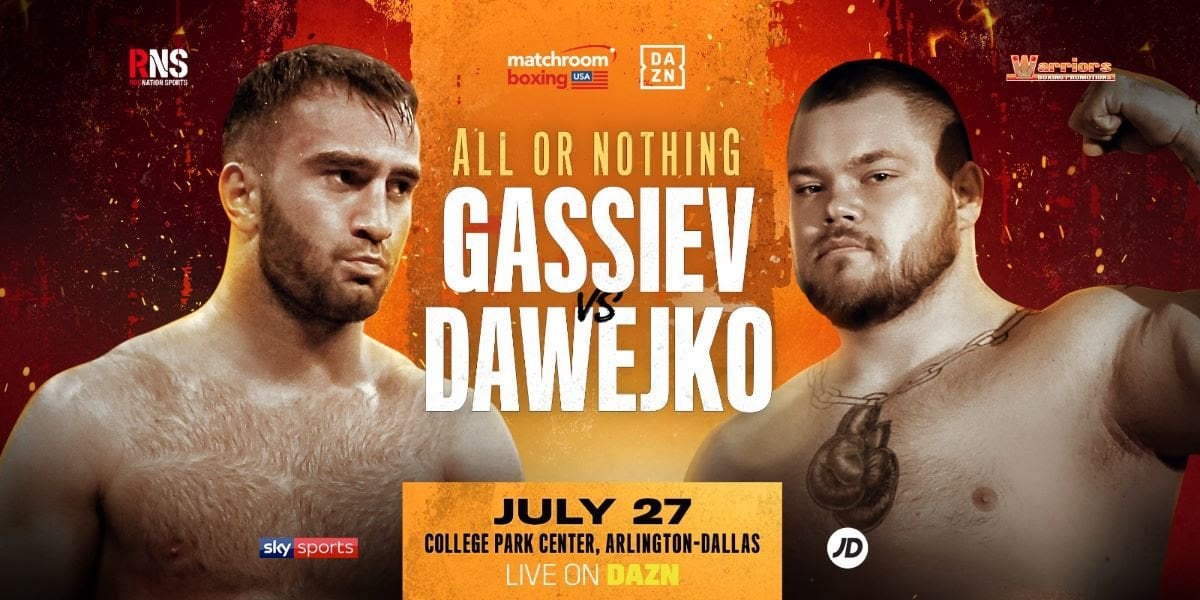 Murat Gassiev will make his long-awaited Heavyweight debut against Joey Dawejko on Saturday July 29 at College Park Center in Arlington, Texas, live on DAZN in the US and on Sky Sports in the UK.

Gassiev has made the move up to join the big guns following an impressive run at Cruiserweight where his reign as IBF champion began when he ripped the title from Denis Lebedev in December 2012 and then stopping Krzystof Wlodarczyk and WBA champion Yuniel Dorticos in thrilling fashion to reach the final of the World Boxing Super Series.

The former unified champion 25 year old met Oleksandr Usyk in the finale to the WBSS in an blockbuster clash for the undisputed title in July where the Ukrainian traveled to Gassiev’s Moscow backyard and beat the hometown favorite. The California based Russian follows Usyk to Heavyweight after signing a co-promotional agreement with Matchroom Boxing USA, Ural Boxing Promotion and Warriors Boxing.

Joey Dawejko to give Gassiev a tough test

Dawejko promises to provide a stiff examination of Gassiev’s credentials at Heavyweight, with the Philly man coming into the bout having nearly shocked Gassiev’s fellow countryman Sergiy Kuzmin in Verona, New York in March. Dawejko – who turns 29 tomorrow (June 11) – faces his third Russian foe in a row having taken Andrey Fedesov the ten round distance in October in Ekaterinburg, and Gassiev is eager to impress when he steps back into the ring after a year’s absence.

Artem Harutyunyan vs Oliver Flores on April 24 in Hamburg, Germany

“I just want to fight – I need big fights,” said Gassiev. “I haven’t boxed for a year. I am only 25 years old so I have time but I want to be in big fights.”

“The most important thing for me is to be in shape and fit. I feel good up at Heavyweight in the gym, I don’t feel heavy, so I am excited to settle into the weight.”

“I sparred with Heavyweights all through my time at Cruiserweight and it was good for me, but sparring is different. I think that the time is right to move up though and I’m very motivated.”

Dawejko: Gassiev taking a risk in first fight at heavyweight

“This is a very solid Heavyweight debut for Murat and a big risk as his first fight,” said promoter Eddie Hearn. “Joey is always competitor against the top Heavyweights, most recently against Russia’s Sergei Kuzmin in a fight that could have gone either way. This is an intriguing fight on what will be an outstanding night of boxing headlined by a potential fight of the year contender in Hooker vs Ramirez.”

Tickets go on pre-sale on Wednesday, with general sale starting on Friday.