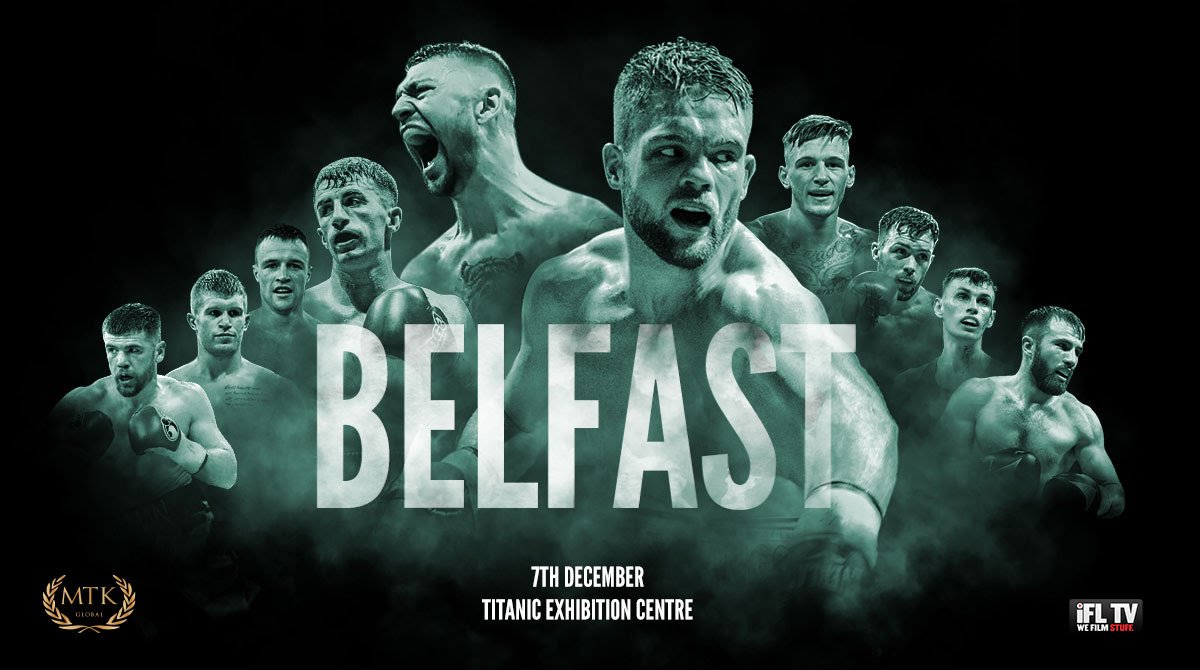 After MTK Global’s highly successful maiden show at the venue on October 5, a follow-up event has been confirmed and will be broadcast live and exclusive on iFL.

Former WBO European middleweight king Cummings continues his resurgence after missing out on the same title earlier in the year. ‘Mr Dynamite’ is closing in on a shot at the Commonwealth belt after a first-round stoppage win last time out.

A current WBO European champion – super-bantamweight McCullagh – is back at the scene of his coronation. ‘White Chocolate’ put on a boxing masterclass against the previously-unbeaten Josh Kennedy that night and is expected to graduate to world level soon.

Another man who sealed a title that night was Belfast local Gallagher, who halted Jay Byrne to claim the BUI Celtic super-welterweight crown. ‘Pat-Man’ seals a swift chance to follow up with further success in his hometown.

The city’s promising welterweight Crocker returns after cruising to 7-0 at Windsor Park and with the likes of Carl Frampton tipping ‘Croc’ as one of the brightest talents around, a fireworks display may be in the offing.

Another young talent looking to force his way into the ‘big time’ sooner rather than later is Naas lightweight Cully, who returns to the same venue at which he rubber-stamped his potential by joining a small handful of fighters to stop Jordan Ellison.

Travelling up from Dublin with a sizeable following will be the popular super-lightweight Sutcliffe Jr. ‘Sucko’ has finally shaken off an injury nightmare and will be keen to resume his push towards title shots.

Bidding to wrap up momentous debut years are former star amateurs McComb and Donnelly, who both took impressive bows in the U.S in October and are back among home fans for their fifth pro bouts.

There are also slots for the unbeaten McCrory, who looks to continue his good form having dispatched Sean McGlinchey last time out and Collins Jr; bidding to bounce back from his Celtic title defeat to Steven Ward at Windsor Park back in July.

Fight 4 Change CEO Rebecca Donnelly MBE is pleased with the progress of the initiative and is hoping to keep increasing its positive impact on society in unison with the MTK Foundation.

Donnelly said: “It’s all funded so it’s all free. We’ve got a younger age group and an older age group. We’ve got Charlie Driscoll who helps with the coaching – he’s a young MTK Global fighter.

“We’ve got a number of programmes. We’ve got one for those who work with mental health issues, one for gang intervention and a female-only programme designed to empower females. We are addressing a range of issues.

“In terms of the MTK Foundation, we are looking at where we merge in terms of the educational components and finding where the synergies are so we can work together closely.

“I’d like to give a big shout to MTK Global. They’ve got some great fighters coming down here and they’ve given lots of tickets to the kids. The aura and confidence the fighters bring inspires the kids to try and emulate them.

“I think everyone should work for their passion. It’s not to say it’s not stressful but I get to work with some great people.”