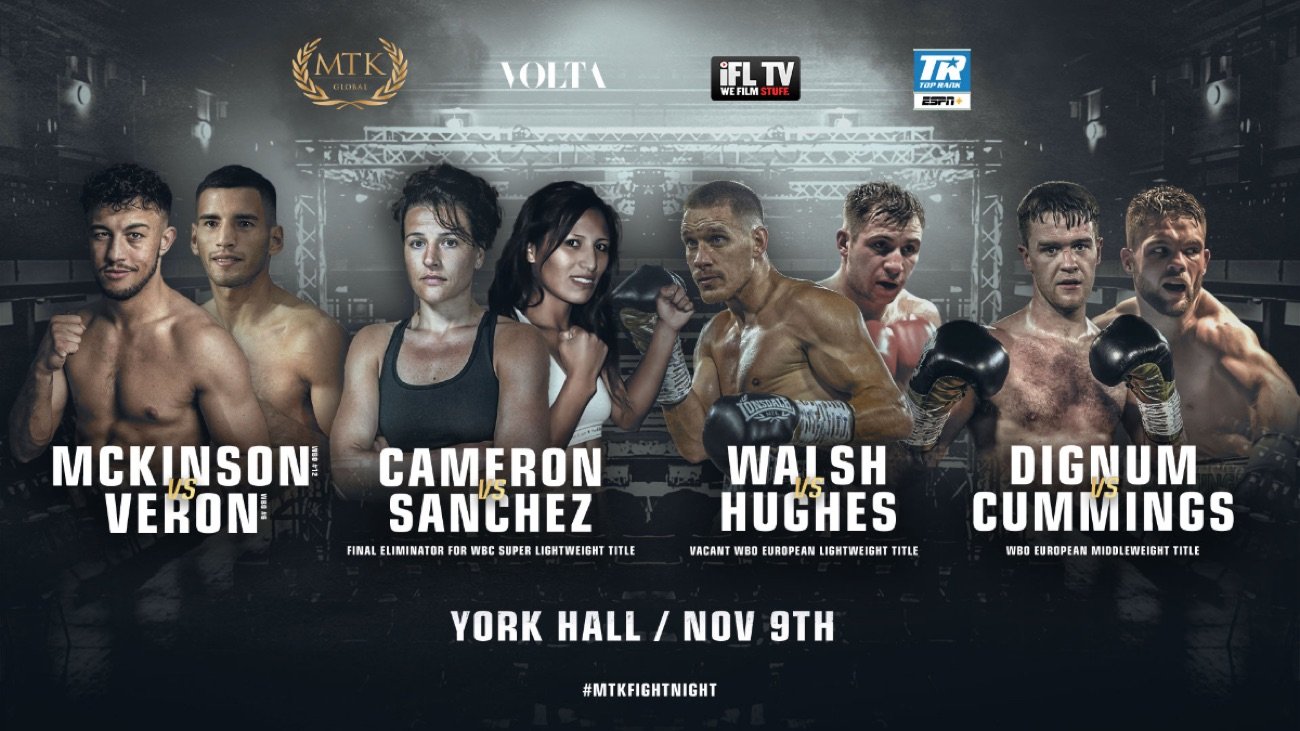 Conrad “Mr. Dynamite” Cummings and the unbeaten Danny Dignum will square off in a can’t-miss 10-round tilt for the vacant WBO European middleweight title Saturday from London’s York Hall on the latest edition of #MTKFightNight.

Cummings (17-3-1, 7 KOs) hopes to capture the WBO European middleweight belt for the third time. His second reign ended in March via unanimous decision to top contender Luke Keeler, but he returned to the win column in October with a six-round points victory over veteran Adam Grabiec. Dignum (11-0, 5 KOs), from Essex, England, will make his middleweight debut after fighting at super middleweight and light heavyweight. This is his first scheduled 10-round bout, and he is coming off an eight-round decision over former world title challenger and European welterweight champion Rafal Jackiewicz.

Former world title challenger Liam Walsh (22-1, 15 KOs) will fight longtime British fan-favorite Maxi Hughes (19-4-2, 4 KOs) for the vacant WBO European lightweight belt. Walsh challenged Gervonta Davis for the IBF junior lightweight world title in May 2017 and was knocked out in the third round. He has fought once since taking a nearly two-year sabbatical from the ring. Before facing Davis, he captured British and Commonwealth honors at 130 pounds.

The tension could have been cut with a knife as the fighters spoke to the media at the final press conference ahead of an incredible #MTKFightNight at York Hall on Saturday.

The action is live in the US on ESPN+ in association with Top Rank, and live worldwide on iFL TV, and here’s what they all had to say at their final press conference:

McKinson: “There are a lot of differences between the last camp to this camp. I beat my opponent at my worst, so for this camp we started in Spain sparring some quality fighters out there.

“I was then fortunate enough to finish my camp with two weeks in Philadelphia training alongside good prospects out there. I needed to get away from friends and family to because to get to the next level I need to be developing.

“I’m in the best shape I’ve ever been in, and on Saturday people will see the best McKinson without a doubt. This fight can catapult me to massive things, so I jumped at the chance when it was offered to me.

“The British guys don’t want to fight me, so I’ve got to take chances, and I guarantee everyone you’ll see a great display of boxing on Saturday.”

Veron: “I know it will be a great fight and I know we are fighting in one hell of a venue. With my skills, I am ready to fight the best in the world.

“I’ve seen McKinson and he’s a great fighter but as soon as I got offered the fight I knew who he was and I know I can beat him.”

Dignum: “Conrad has held this title before and he’s a very good fighter that I rate, but I think I’m a bit fresher than him.

“He’s been in some hard fights, and now it’s my time to shine. It’s going to be a good fight and on Saturday I’m confident that I’ll be picking up my first title.”

Cummings: “I’m looking forward to Saturday. I’ve been in camp for 12 weeks and had a fight last month to get the rust off, so I’m feeling good. It’s a tough fight and he’s a good fighter, but I’ll use all my experience.

“This fight gets me back in the mix, so thanks to MTK Global for the opportunity and I’ll grab it with both hands. It’s my third time boxing at York Hall, and I’ll make it a hat-trick of wins on Saturday.”

Cameron: “I have massive respect to Sanchez, she’s a former world champion and I’ve prepared hard. I’ve boxed at the elite level for years now so I’m ready for whoever is in front of me.

“It’s a great job that MTK Global have done. I’m already mandatory at lightweight, and now we’ve moved up to super-lightweight to get mandatory in another position. I’ll chase these champions and keep on their toes.

“I love boxing at York Hall and the atmosphere is unbelievable, so I can’t wait to get back in the ring on Saturday.”

Sanchez: “I’ve been world champion before and I know what I’m facing. It’s a great opponent in Chantelle, and I’m ready for it.

“I have a lot of experience in boxing and I know that I can win this fight against her on Saturday.”

Walsh: “I’ve been ready for a long time. Everyone knows I sat out for 2 years in my career but I’m more than ready now.

“York Hall is almost a second home to me. We’ve not got a venue in Norwich, so the closest available venue really is York Hall. My last fight here was Paul Appleby in a British Fight of the Year, and I’ve not fought there since.

“It’s a special arena and I’d fight there for the rest of my career if I could. It’s great value for money for the fans, so I’m excited for this weekend.

“I’ve watched Maxi Hughes for a long time, and actually watched him fight at York Hall before. I always thought we’d cross paths so I’m surprised it took this long. He’s got a good team around him and it should be a good fight.”

Hughes: “I’m grateful for this chance and I’ll take it with both hands. I could have waited around for an English title shot but I didn’t want that. I would rather fight Liam.

“He’s boxed at world level before, so its good to challenge myself and throw myself in and get these fights. I’ve been working hard all year and constantly improving, so bring it on.”

Egbunike: “I’ve sold a lot of tickets for this fight against Allington and my whole area are coming out, so it’s going to be good.

“A lot of the compliments I get through boxing are that I’m strong, but I don’t want to remembered for just strength. My actual strength lies in my skills as a boxer, so being strong at my weight is a bonus. I’ll show my skills this weekend.

“I have respect for Billy. If I wasn’t fighting him I’d probably be sparring at his gym. We’ll put that aside, have a fight and shake hands afterwards. He’s a local boy from close to where I am and we actually went to the same school, so there is a lot of respect.”

Allington: “I’ve stayed in the gym and committed to boxing. I’ve had some tough fights and I always turn up and show up, so it will be the same on Saturday.

“We as a team have come very prepared. I’ve been at this since I was a little boy and have desire to be a champion.”

Promoter Lee Eaton: “It’s a fantastic card on Saturday. We always love coming to the York Hall and it’s going to be another fantastic MTK Fight Night.

“We have Michael McKinson against Luis Veron, and the winner of this fight will be top five with the WBO and pushing on for a world title eliminator to face Terence Crawford, so it’s a massive opportunity.

“There is two-time WBO European champion Conrad Cummings looking to win the belt again when he faces Danny Dignum who is in fantastic shape, so that should be a brilliant fight.

“Chantelle Cameron is back and she has a big chance, as if she wins this then she is guaranteed a world title fight against Jessica McGaskill at super-lightweight. We obviously know who else has just moved to super-lightweight too, so we’re coming for you Katie Taylor.

Liam Walsh is on the comeback trail as he fights Maxi Hughes for the WBO European title. Liam has fought for the IBF world title and has a tough test in Maxi Hughes who has been about and boxed at a high level.

“Daniel Egbunike against Billy Allington is a great fight too and they’ve both sold about 150 tickets each, so there is going to be some atmosphere in York Hall on Saturday.”