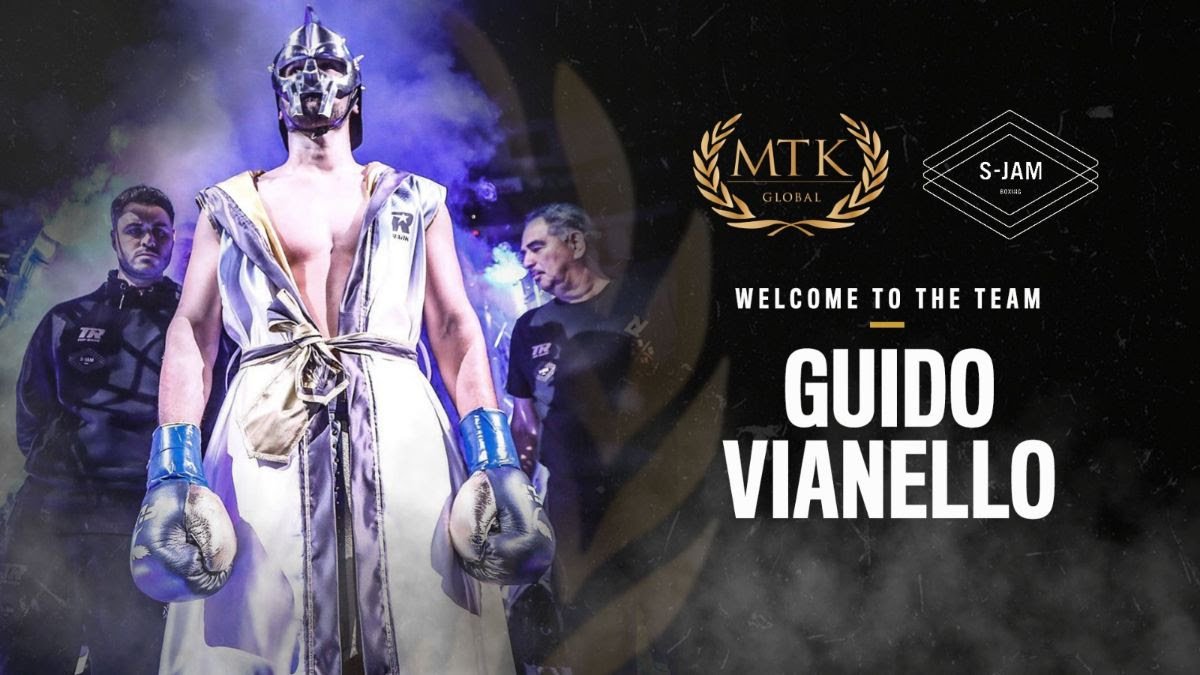 ‘The Gladiator’ has wowed American fans with a hat-trick of early knockout victories since turning professional and also impressed lineal world heavyweight champion Tyson Fury during the pair’s sparring sessions.

As he looks to accelerate his rise up the rankings, the 25-year-old from Rome – a 2016 Olympian – is delighted to be the focus of MTK Global and S-Jam Boxing’s first project together.

Vianello said: “I’m very excited my team at S-Jam Boxing and MTK Global have come together to support me. This is only going to help elevate me to the top and to become world heavyweight champion.

“I want to fight in my home country very soon and make my country proud and with S-Jam Boxing and MTK Global working together, I know this can happen.

“I’m excited to see where my passion and the dual forces of S-Jam and MTK Global can take me. Watch this space!”

MTK Global International Development Coordinator Jamie Conlan said: “This is a great moment for MTK Global, S-Jam Boxing and of course for Guido.

“Everyone knows the rich history of Italian heavyweight boxing with the likes of Primo Carnera. We’ve faith Guido can create his own legacy and we welcome the opportunity to help him do so.

“We’re delighted to kick off our working relationship with S-Jam Boxing in such style and the future is an exciting one for all concerned.”

S-Jam Boxing co-founder Sam Jones added: “We’re very happy to be working with Jamie Conlan and the team at MTK Global on furthering the development and the career of Guido Vianello, one of the most exiting up and coming heavyweights in the world right now.

“Guido is already Italy’s biggest boxing star and is quickly making a name for himself on the world stage with a view to bringing big-time boxing back to Italy. With S-Jam and MTK Global in his corner, the future looks very, very exciting.”

Vianello has halted his three professional opponents to date in less than four rounds collectively; most recently blasting Lawrence Gabriel aside in just 49 seconds on the Vasiliy Lomachenko vs. Anthony Crolla undercard in Los Angeles.

‘Kid Caramel’ (11-2, 2 KOs) bounced back from narrow points defeats to Tyrone McKenna and Johnny Coyle by outclassing Zoltan Szabo at the Emirates Arena in March and now steps up towards title level in an eight-round contest.

In Garrido (24-23-3, 6 KOs), he faces one of the boxing world’s most entertaining characters who’s never been stopped; detaining the likes of McKenna, Jack Catterall and Frankie Gavin in the past. The Marseille resident had been due to face Gary Cully in Belfast only for injury to force the withdrawal of the Naas star.

Benson, though, is ready to showcase himself to an American TV audience in style.

The Edinburgh super-lightweight said: “I’m looking forward to this fight. Garrido’s style should bring out the best in me and it’ll be one the fans can enjoy.

“A boxer against a fighter is always intriguing to watch so it should be a spectacle for those there and the ESPN+ and iFL TV viewers.

“As an opponent, Garrido is made for me. I’m known for being a great boxer. My movement is key and while he normally only loses split decisions, I’m looking to win every round convincingly to set up an even bigger fight.”

Unbeaten Kieran Smith will now take on dangerous Ivan Montero on #MTKFightNight at the Emirates Arena in Glasgow on June 22.

Smith (14-0, 7 KOs) was due to face Michael McGurk on the bill before an injury forced McGurk out of the contest. Smith now turns his attention to Montero (21-3, 9 KOs), who has only been beaten at a high level, and the Scottish star knows it will be a tough night.

Smith, who defends the WBC International Silver super-welterweight crown on the night, said: “I’m pleased to still be on the bill. It’s been a long camp so I didn’t want that to go to waste.

“Regardless of who is the opponent I’ve got a job to do and that’s to go and win.

“I was frustrated when Michael McGurk pulled out because we had done a lot of work gearing towards him, but that’s by the by now and I’ve got a new challenge in front of me so I can’t dwell on him now.

“Ivan Montero is a serious operator, but I believe this is my coming out party and I’ll be able to show everyone what I’m capable of by beating him.”