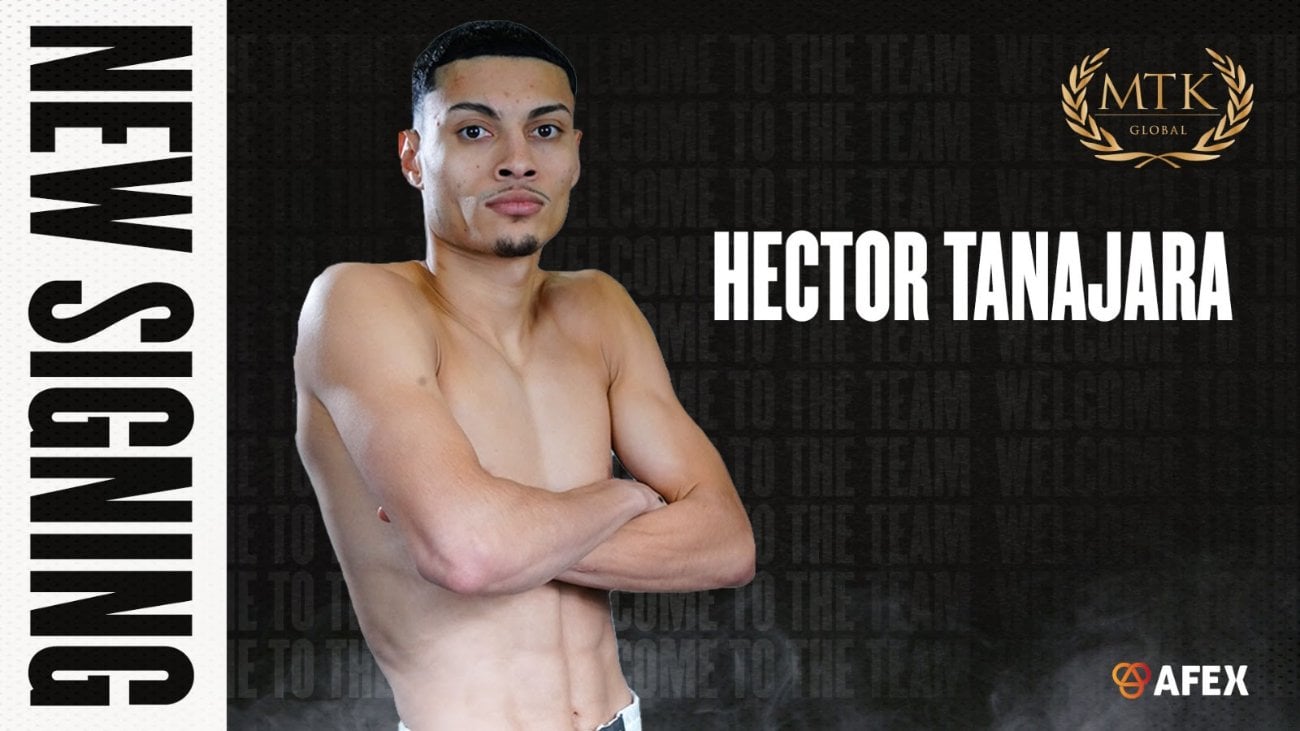 Unbeaten Tanajara (19-0, 5 KOs) will be advised by MTK Global and managed by Rick Mirigian, becoming the latest US star to team up with the two parties following world champion signings Josh Franco and welterweight superstar Vergil Ortiz Jr over the past week.

Tanajara had had a fantastic career so far and was recently in action when he defended his WBC United States lightweight title against Juan Carlos Burgos at the Alamodome in San Antonio.

The 23-year-old also holds wins over the likes of Ezequiel Aviles, Ivan Delgado, and Robert Manzanarez, and he’s looking forward to the future alongside MTK Global and Mirigian.

Tanajara said: “I’m very excited and believe that working with MTK Global as my advisors will elevate me in the sport of boxing. They have a well-respected track record of getting things done and are behind some of the biggest fights we’ve seen recently. I just have to continue working hard and let them do what they do best.

“Having Rick Mirigian as my manager is a game-changer, and his work ethic is something I truly admire. I know he’s going to work relentlessly to get my team and me the best fights around and help get me to be the superstar I know I will be.”

“He’s already managed to amass a superb unbeaten record of 19-0, and we’re confident that alongside Rick Mirigian, we can help him achieve huge success in the sport.”

Mirigian added: “Hector Tanajara is right there to fight Devin Haney, Ryan Garcia, Teofimo Lopez, and the rest of the division in the year to come and after.

“He can beat these guys, and the big fights await for this undefeated star. With a complete team in myself, MTK Global, and RGBA, we will go out there and look to get these type of fights for him.”

Rodriguez (10-0, 5 KOs) will be advised by MTK Global and managed by Rick Mirigian, with the two boxing forces guiding the career of the 26-year-old as he goes from strength to strength in the paid ranks.

After a sensational amateur career which saw him take bronze as a middleweight at the 2016 Olympics in Rio, he has won all 10 of his professional contests, with five coming by knockout.

Rodriguez is already extremely popular around the world, with over 300,000 followers on Instagram, and he’s happy with this next step in his career.

Rodriguez said: “Signing with MTK Global is an important step, and having them on my side as advisors is something that will help to strengthen my career.

“I am still an undefeated boxer and I will continue making history, just as I did for my country. MTK Global and Rick Mirigan have both done things well in the boxing world, and I know that my career will explode and the big cards will come.

“I have been training a lot for this moment, and I am ready and excited as I want to be world champion.”

Tickets Now On Sale To Public For Eggington-molina Championship Clash

MTK Global CEO Bob Yalen said: “We’re proud to be announcing the signing of Misael Rodriguez. He’s regarded as one of the best rising stars in boxing, and we’re excited to be working with Rick Mirigian to guide his career.

“He has already proven himself to be an incredible amateur star by capturing an Olympic medal, and we’re convinced that he can have just as much success as a professional.”

Mirigian said: “Outside of Canelo, Misael is Mexico’s most popular active fighter. He was the only Mexican Olympian to medal in the past 25 years, he has been on reality shows and has 300,000 organic Instagram followers and can fight his ass off. MTK and I have major things for 2021 in store for this undefeated star.”

Rodriguez is the latest big name to team up with MTK Global and Rick Mirigian, following on from welterweight superstar Vergil Ortiz Jr, super-flyweight world champion Josh Franco, and unbeaten Hector Tanajara over the past week.

Azim’s debut was initially set to take place earlier in November before a positive COVID-19 test forced the postponement, but he’s excited to be back so soon after initially planned.

Azim said: “I am glad that the fight has been rearranged so quickly. It was unfortunate last time, but I say that everything happens for a reason so maybe my destiny was to fight on December 2.

“My mindset stays the same and the only thing that changes is the date. I am at my maximum fitness level and have peaked at the right time, so to hear the news of the fight being rearranged has made my day.”

“It was a shame when he couldn’t make his professional debut earlier this month due to COVID-19, so it’s great that he’s 100% healthy and we can get it rescheduled so quickly.”

It means that brothers Hassan and Adam Azim will both make their debut on the same card, with Adam entering the paid ranks with a fight against Ed Harrison.