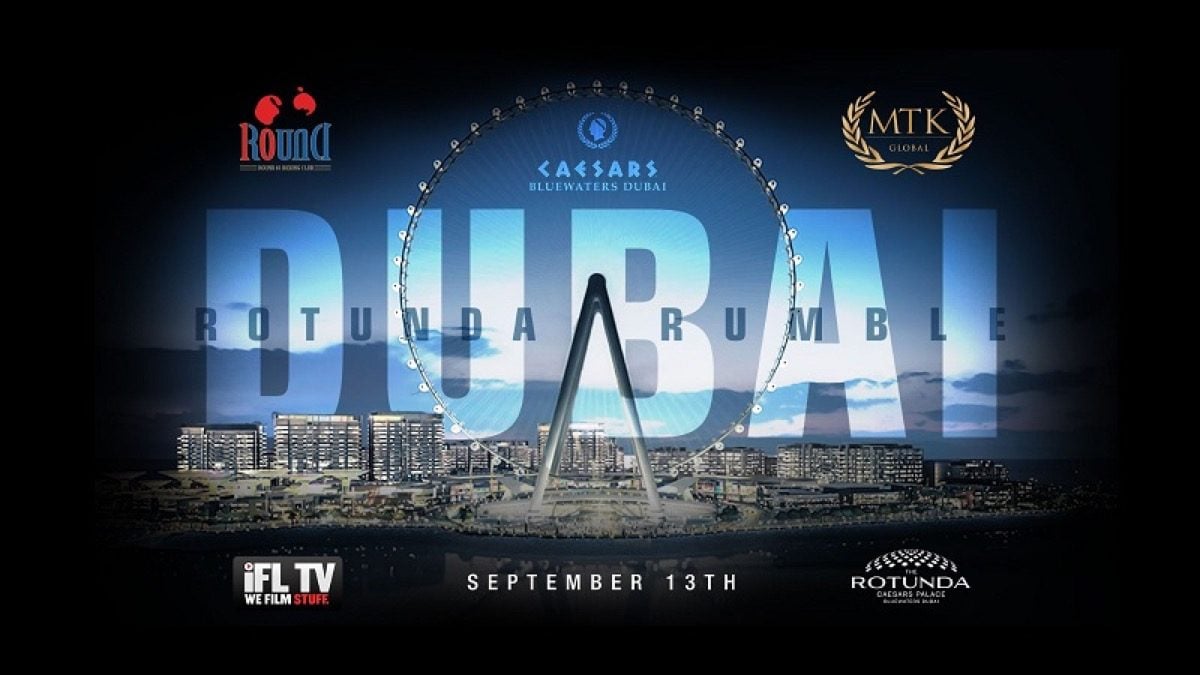 The action packed evening, promoted by Ahmad A. Seddiqi’s Round 10 Boxing in association with MTK Global, takes place in The Rotunda at Caesars Palace, a stunning 500-seater venue that is an internationally renowned entertainment destination.

Following an esteemed amateur career that saw Abass win a bronze medal in the world amateur championships and gold at the European’s, he has moved quickly in the paid ranks. Since turning professional in April 2018, Baraou has won his six professional fights including victories over former World Champions Carlos Molina and Ali Funeka.

“I am really looking forward to my fight in Dubai and I would like to thank my promoter Team Sauerland for this opportunity,” said Baraou. “It will be my first international fight, which will help me to grow as a boxer and gain more experience.

“On top of everything, ‘Caesars Palace’ is a well known brand in boxing and the location in Dubai is top notch. I have been in Dubai quite often for vacation and I am really happy to fight there as well.”

“Abass has made a name for himself in Germany during his first year as a professional boxer,” said Baraou’s promoter Nisse Sauerland. “He has fought six outstanding fights, winning two titles already and has showcased his skills to the world of boxing.

“Without doubt he is one of the greatest talents out there. He will gain a lot of experience during his first fight away from his home country and I am sure he will leave a mark on the international stage!”

Ahmed A. Seddiqi of Round 10 Boxing added: “We’re delighted to have Abass Baraou added to our huge Rotunda Rumble event. He’s regarded as one of the best rising stars in boxing and we can’t wait to have him display his skills in Dubai.”

In the opposite corner will be Egypt’s unbeaten power puncher Abdelghani Saber (8-0-1, 8 KOs). Also on the card is a clash between Neslan Machado (16-0, 8 KOs) and Alexander Mejia (13-1, 6 KOs) for the WBA International super-bantamweight title, world-ranked Muhammad Waseem, highly-rated star Andrew Selby and many more local and international names.

Flyweight star Muhammed Waseem will make his long-awaited return to the ring when he headlines the fantastic ‘Rotunda Rumble’ event in Dubai on September 13.

The card will be promoted by Ahmed A. Seddiqi’s Round 10 Boxing in association with MTK Global, and takes place at the stunning Caesars Palace Dubai.

Waseem said: “I’m really happy to be fighting in Dubai. It will be really good for my career because I am fighting after 14 months out and I’m very excited to be coming back in the ring after a long time.

“I am a very proud part of MTK Global, and I can’t wait to fight. I don’t want to disappoint my fans so I will give them a very good performance.

Ahmed A. Seddiqi of Round 10 Boxing added: “We’re delighted to have Muhammad Waseem headline our huge ‘Rotunda Rumble’ event next month. He is widely-regarded as one of the best flyweight fighters in the world and we can’t wait to have him part of our Round 10 Boxing event.

“To have high-quality talent like Waseem fighting in the region shows how much Round 10 Boxing is going from strength to strength in Dubai, and he is just one of several fantastic fighters that will be in action.”

More huge names are set to be added to the card in the near future, as MTK Global hosts their second event in Dubai following the massive success of The Fight DXB Uncovered at Emirates Golf Club back in April.

On that occasion there were two major title fights along with many exciting stars in action, as they competed in front of royalty on a historic night.

September’s event is the latest in the partnership between Round 10 Boxing and MTK Global. Round 10 Boxing prides itself on being Dubai’s only exclusive boxing club, and their ethos has always been to promote passion in boxing.

Andrew Selby is promising the best version of himself yet after he was added to the huge ‘Rotunda Rumble’ card taking place at Caesars Palace Dubai on September 13.

The fantastic event will be promoted by Ahmed A. Seddiqi’s Round 10 Boxing in association with MTK Global, and is headlined by flyweight superstar Muhammed Waseem.

British flyweight champion Selby (11-1, 6 KOs) is back in action following his world title eliminator with Julio Cesar Martinez in March, and he plans on making up for lost time.

Selby said: “I’m very excited to be back and I plan on putting on a good show. I’ve always wanted to go to Dubai so I’m really looking forward to fighting there on a huge card.

“Training has been really hard over the past few months and I have pushed my body to the limits. I am really glad that I am fighting so soon after teaming up with MTK Global too, as the more regular I fight the better I perform.

“I had a set back in the last fight but it has made me more determined to achieve great things in boxing. Fans should expect the best Andrew Selby yet and after this fight I want to be out regular and fighting for big titles.”

Ahmed A. Seddiqi of Round 10 Boxing added: “We’re extremely excited that Andrew Selby will be fighting on the massive ‘Rotunda Rumble’ event in September. Selby was a fantastic amateur and has carried that success into the professional ranks, so it’s great to have him part of the Round 10 Boxing event.

“He joins Muhammad Waseem on what will be a brilliant card full of fighters from around the world. The prospect of fighting on a Round 10 Boxing event in Dubai appeals to lots of fighters, and we can’t wait for another brilliant event next month.”

MTK Global and Ahmed A. Seddiqi’s Round 10 Boxing are delighted to announce their return to Dubai for the Rotunda Rumble on Friday 13 September at Caesar’s Palace Dubai.

It is the second event of 2019 that MTK Global and Round 10 Boxing have hosted in Dubai, following the major success of The Fight DXB Uncovered at Emirates Golf Club back in April.

On that occasion there were two major title fights along with many exciting stars in action, as they competed in front of royalty on a historic night.

Attention now turns to the Rotunda Rumble in September, where another brilliant night of boxing will be taking place next month.

Ahmed A. Seddiqi of Round 10 Boxing said: “Caesars Palace has always been a name synonymous with boxing having hosted many of the most historical fights under it’s roof and we are delighted to be bringing boxing back to it’s glorious roots with the “Rotunda Rumble” on September 13th here in Dubai, which we hope will be the first of many with our partnership with MTK Global. This is yet another big step in our mission to develop the sport in the region.”

MTK Global Professional Development Coordinator Jamie Conlan added: “Everyone at MTK Global is delighted to be heading back to Dubai to stage the ‘Rotunda Rumble’ alongside Ahmed A. Seddiqi’s Round 10 Boxing. The first event was a major success back in April and we can’t wait to return for another fantastic night of action.

“We witnessed some brilliant fighters and some great fights in a spectacular location earlier this year, and we’re hoping it will be more of the same in September at Caesar’s Palace Dubai.”