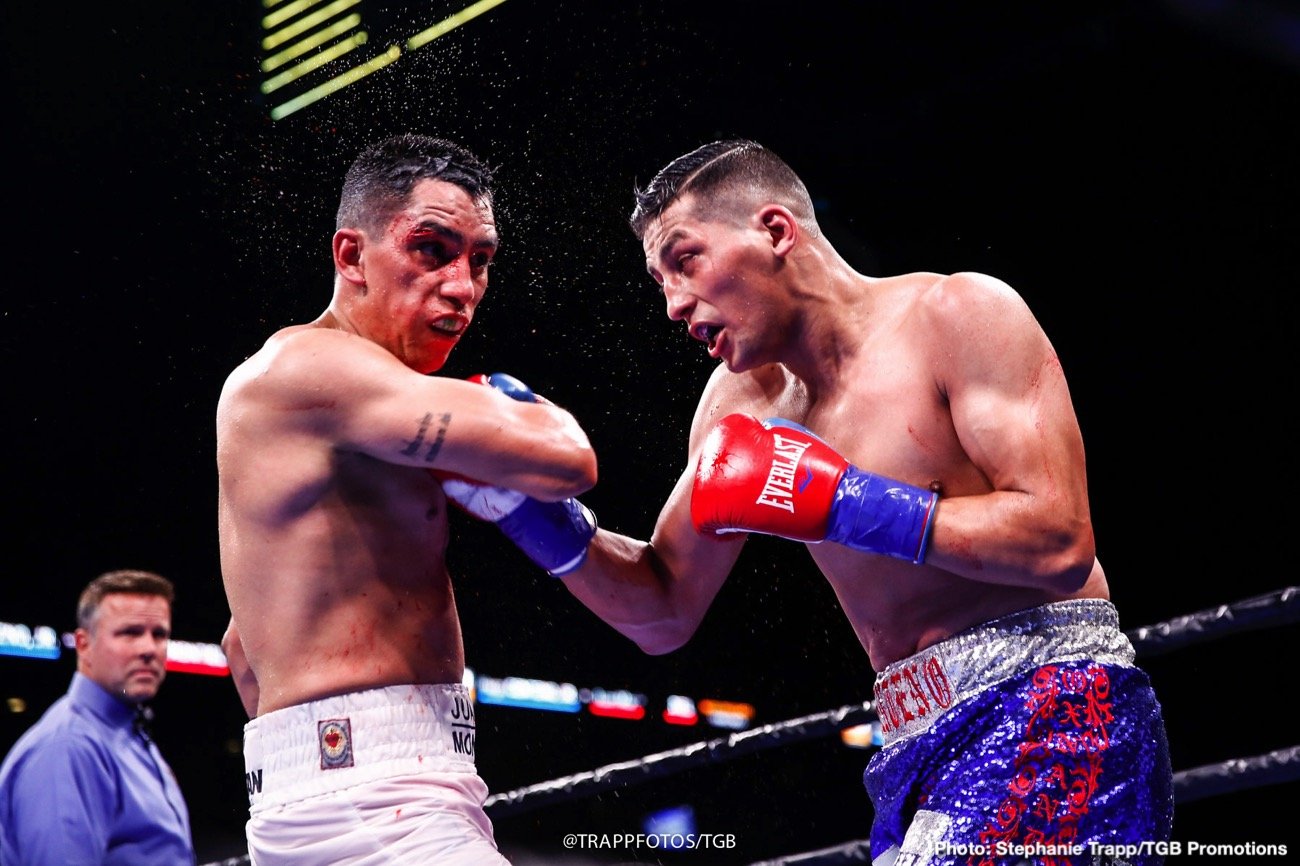 Mexican middleweight Juan Macias Montiel says he and fellow contender Hugo Centeno Jr., have unfinished business that can only be settled one way.

“There has to be a rematch,” said Montiel (21-4-2, 21 KOs), immediately after his FOX Sports 1 nationally televised split draw with Centeno (27-3-1, 14 KOs), a 10-round back-and-forth affair that saw Centeno throw more punches, but Montiel’s power do the better quality work.

The two 160-lb fighters met on the televised undercard of the WBC Super Welterweight rematch between Tony Harrison and Jermell Charlo at the Toyota Arena in Ontario, California this past Saturday, December 21.

“We can’t just go on with our careers without settling this,” said the energized Montiel. “I respect his performance, but I landed the harder punches and next time I see him I will finish this once and for all.”

Montiel, from Los Mochis, Sinaloa, Mexico, rocked the capable Centeno, from Oxnard, California, in round two, but the two middleweights then settled into a rhythm with the Californian landing more punches and Mexico’s Montiel landing harder.

“After the fight, Hugo Centeno Sr., said my fighter Juan got an early Christmas gift, so we agreed to do an immediate rematch,” said Montiel’s promoter, Sampson Lewkowicz. “It was an entertaining fight and boxing fans deserve to know who the better fighter is. Let’s do it again and settle this.”

Lewkowicz says he’s currently working on the specifics for the middleweight rematch and will announce them as soon as possible.

Professional Boxing kicks off 2020 in South Florida on Friday, January 17 at 6 pm, as BAD Promotions in association with ChampionsHeart Promotions proudly present its inaugural event “Only The Strong Survive,” a night of world-class boxing at Hallandale Park & Casino in the Sports of King Theater, a unique and intimate venue for a night of world-class boxing with proceeds going to the local Breast Cancer Organization.

“Only The Strong Survive” will feature former two-time world Champion Maureen Shea 28-2-1, 12 KOs who makes her South Florida Debut and continues to make noise in the bantamweight division as she makes strides towards regaining her World Titles.

Former BKB Middleweight Champion, & elite contender David “King” Estrada 29-6(, 19 KOs makes his return to the ring and South Florida in a 6 round attraction. Estrada, who is always entertaining has battled against the likes of the best of boxing in Shane Mosley, Kermit Cintron, Andre Berto, Luis Abregu and Jesus Soto Karass.

The main attraction will feature red hot undefeated Light Heavyweight and local hero from Davie Florida Blake Davis 4-0, 2 KOs as he makes his much-anticipated return to the ring and his debut under BAD PROMOTIONS. Davis the former amateur standout and Ringside World Champion, is looking to make a big statement for his beloved South Florida fanbase.

Hallandale Park & Casino is located at 901 Federal Hwy in Hallandale Beach Florida, the FIRST BELL will RING at 7 PM in the beautiful Sports of King Theater on the second floor. Doors Open at 6 PM.