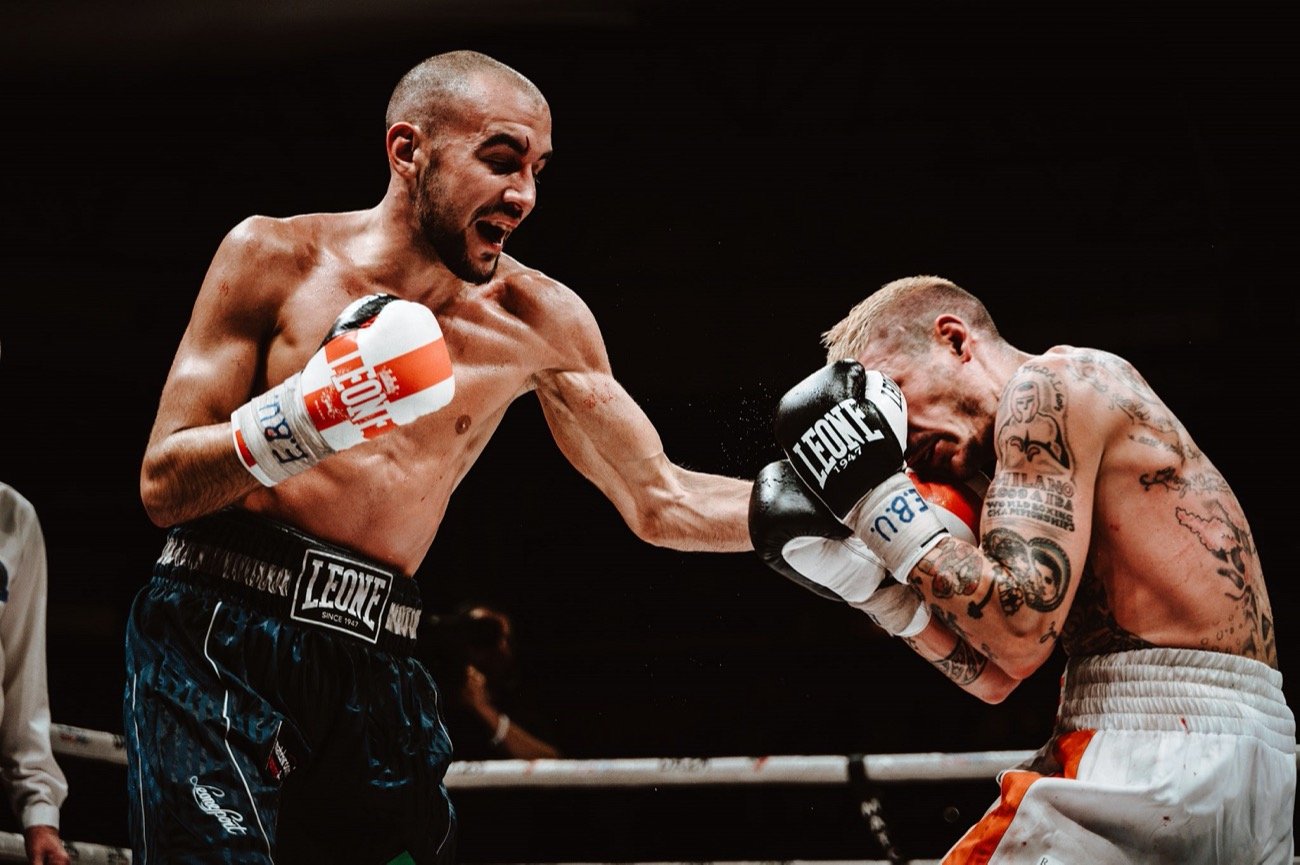 On October 25 at Allianz Cloud in Milan, Italy, IBF International super middleweight champion Daniele Scardina successfully defended his title defeating on points two-time Belgian champion Ilias Achergui on the 10 rounds distance. During the second round, Scardina knocked down Achergui with a spectacular left hook to the jaw which sent the 2,600 spectators off their seats. The scores: 98-91, 97-92 and 98-91 in favor of Scardina. This fight was the main event due to Scardina’s huge popularity. Most fans were from Milan and from Rozzano, the town close to Milan where Scardina was born, grew up and still comes back several times a year despite living in Miami Beach where he trains at legendary 5th Street Gym. Daniele Scardina is now 18-0 with 16 KOs while Ilias Achergui falls to 13-5-1.

European lightweight champion Francesco Patera won on points against Italian champion Domenico Valentino after 12 entertaining rounds. Patera knocked down Valentino in the 12th round, but according to most people that wasn’t enough to justify the large advantage on the judges’ scorecards: 117-111, 117-110 and 117-111. Most spectators and journalists saw it a close fight. Patera’s record is now 23-3 while Valentino falls to 8-1. Valentino was born and still lives in Marcianise, close to Napoli, but proved to be more popular than expected in Milan as the crowds rooted for him for the entire fight.

In the third title match of the evening, Maxim Prodan beat on points Tony Dixon after 10 rounds winning the vacant IBF International welterweight title. Ukraine-born Prodan has been fighting in Milan for the past 4 years and has a following of Ukrainians and also Milanesi. Prodan used his trademark power punches, but couldn’t score the knock out. The judges saw it 97-93 and 98-92 for Prodan and 96-94 for Dixon. Maxim Prodan is still undefeated with a record of 18-0-1 with 14 KOs. Tony Dixon’s record is now 12-3.

The show was promoted by Matchroom Boxing Italy, Opi Since 82 and DAZN which streamed it live in Italy, USA, Canada, Germany, Austria, Switzerland and Spain.

On October 25, at Allianz Cloud in Milan, Italy, IBF International super middleweight champion Daniele Scardina (17-0 with 14 KOs) will defend against 2-times Belgian champion Ilias Achergui (13-4-1 with 6 KOs) on the 10 rounds distance. It will be Scardina’s second defense. He won the IBF belt beating on points Finnish Henri Kekalainen at Superstudio Più in Milan last March 8 and defended it against Alessandro Goddi on June 28 at Allianz Cloud. The October 25 show is promoted by Opi Since 82, Matchroom Boxing Italy and DAZN which will broadcast it live.

Born in Rozzano, close to Milan, on April 2 1992, pro boxer since September 2015, Daniele Scardina is a resident of Miami Beach (Florida, USA) where he trains at the famous 5th Street Gym under coach Dino Spencer and where he got the opportunity to spar with world champions like WBO middleweight king Demetrius Andrade. Scardina and Ilias Achergui have an opponent in common: they both defeated on points Henri Kekalainen.

Daniele, when you started training for the October 25 fight?

“Since the second week of August. I didn’t know my opponent’s name, but I knew that I had to fight on October 25 so I started running and doing athletic training alone. I didn’t enter a gym until I came back to Miami Beach. I stayed the entire month in Italy to get a vacation and also to attend Dino Spencer’s wedding in Corleone, the Sicilian town where his ancestors come from.”

What do you think about Ilias Achergui?

“He is a very good boxer. He won the national title in two weight divisions and deserves respect. He is used to fight for a title and win it. He will be a worthy opponent. That said, I will beat him.”

At 5th Street Gym in Miami Beach you always had quality sparring partners and you also had the opportunity to spar with world champions. Who are you training with right now?

“I trained and sparred with two Russians who proved to be much better than expected. When I sparred with world champions like Demetrius Andrade, my coach told me that I performed very well. So I will do it again when some world champion stops at the gym.”

This will be your third fight of the year in Italy. Do you plan to come back for good?

“No, Miami Beach is my hometown now. I miss Italy, but since I signed with Opi Since 82 I go to Milan every 3 or 4 months to fight and then I stay a couple of weeks to join my parents, my friends and this makes everything a lot easier.”

If you win on October 25, you will keep defending the IBF International belt or you’ll go after the European title which is a major step to the world championship.

“I didn’t talk about it with Opi Since 82 yet, but they know that I want to become world champion. Whatever makes me reach my goal is good. Right now, I have to worry only about my opponent as I need to keep the IBF International belt to move forward with my career.”

Misael Lopez looks to Shine on Lions Only card

Hard charging super featherweight prospect Misael Lopez (11-0) is looking to close out 2019 with a bang.

The 23 year old returns to action tomorrow in Houston, Texas against Nestor Robledo on the first card promoted by Jermall and Jermell Charlo’s Lions Only Promotions in which neither of the twins is fighting on the card.

Lopez is very excited for having the opportunity to put his skills on display in a boxing town like Houston.

“It is amazing to be fighting out there. This is the type of exposure that you want as a boxer to showcase your skills. I am the ‘A’ side and this will be a chance for me to show my skills against a tough Mexican fighter who will be coming forward so I am excited to put on a show. It should be a great atmosphere,” Lopez stated.

His last fight took place in March when he blew out Richard Flores in 1 round. He is planning on this fight ending in similar fashion.

“That would be nice. I know that Ryan Garcia’s brother Sean Garcia couldn’t knock him out so that’s the goal. He fought him last and he couldn’t get him out so we are definitely looking for a knockout,” revealed Lopez.

If everything goes well Lopez hopes to have a quick turn around and get right back in action. Now that he is aligned with Oscar Vazquez and Sugar’s Boxing he expects to be much more active.

“I was supposed to fight in late September so I have been ready for a while. I can’t wait to show what I can do. Now that I have a new team and new coaches like (Mark) ‘Too Sharp’ (Johnson) everything is going in the right direction. We are hoping if everything goes right that we will get a TV fight on a PBC card later this year. That is the goal,” Lopez stated.

The 11 fight card is topped by super lightweight prospect Darwin Price taking on veteran Breidis Prescott in a bout scheduled for 10 rounds.