The weigh-in of the fighters who will fight tomorrow at the Milano Boxing Night was held today at Raffaello Hotel in Milan, Italy, hosted by David Diamante and streamed live on Matchroom Boxing You Tube channel. The show is promoted behind closed doors by Opi Since 82-Matchroom-DAZN at Allianz Cloud and will be streamed live by DAZN. 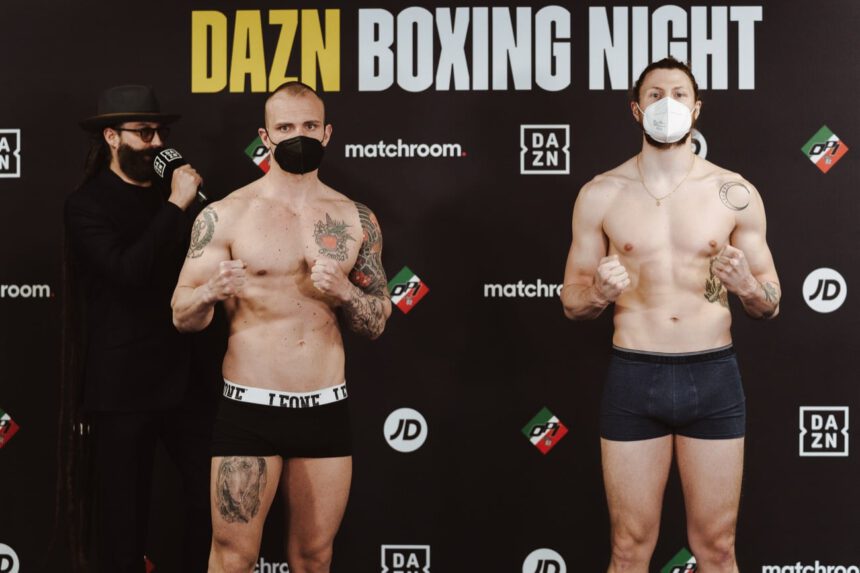 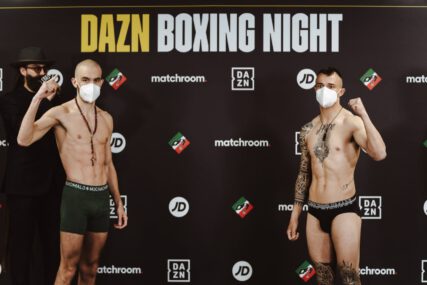 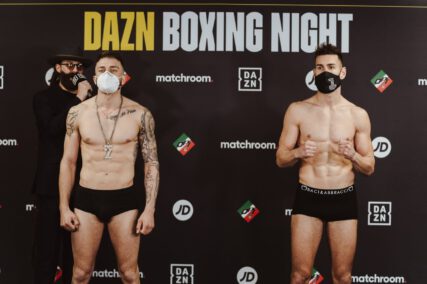 The press conference to present the Milano Boxing Night was held at Raffaello Hotel in Milan, Italy. Promoted by Opi Since 82-Matchroom-DAZN, the event will be staged at Allianz Cloud next Friday. In the main event, Fabio Turchi (18-1 with 13 KOs) will challenge French champion Dylan Bregeon (11-0-1 with 3 KOs) for the vacant European Union cruiserweight belt on the 12 rounds distance. Undefeated super middleweights Ivan Zucco (12-0 with 10 KOs) and Luca Capuano (11-0 with 2 KOs) will fight for the vacant Italian title on the 10 rounds distance.

Francesco Patera and Vladislav Melnyk should have fought for the vacant WBC Silver lightweight championship, but a member of Melnyk’s team resulted positive to Covid-19 and the fight was canceled. The promoters found a late sub: Nicola Henchiri (Italy, 9-3-2) will fight Patera on the 8 rounds distance and with no title on the line. Biagio Patera who trains his brother Francesco commented: “We trained to fight Devis Boschiero, then Vadislav Melnyk and now we have to fight Nicola Henchiri. The most important thing is getting back in the ring after one year and half.” Same attitude by his brother: “I want to get back in the ring, I want the big fights against major names and that’s why I will beat Nicola Henchiri on Friday night.”

Luca Capuano: “I trained for this fight like I always trained: very seriously. This time I’m more motivated because the fight is on the ten rounds distance and there is the Italian belt on the line. Winning the national title is my priority, against Ivan or somebody else is the same. I have no problem fighting everybody. Maybe in the near future I will fight Daniele Scardina.”

Ivan Zucco: “I can’t wait to fight for the Italian championship. I consider Luca a technical boxer, while I am both a boxer and a fighter. Like Capuano, I have no problem fighting everybody including Daniele Scardina. A derby between Italian fighters makes sense.”

Fabio Turchi sounded very confident in himself: “Defeating Nikolajs Grisunins brought my confidence back after the loss to Tommy McCarthy. I want the European Union belt. Bregeon is a good fighter and I respect him. In the last few months I grew up as a fighter adding weapons to my arsenal and you will see it on Friday night. Dylan is a little taller than me, but I am used to fight taller opponents. I will adapt to his style and prepare the right counters. The best man will win and that means me!”

Dylan Bregeon didn’t talk much: “I like Fabio’s style and the fight will be entertaining. The best man will win.”