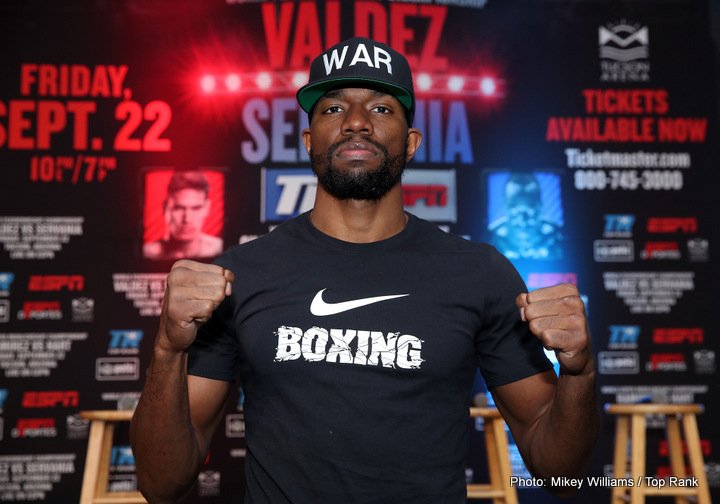 Mike Gavronski is headed to America’s Playground. Gavronski (24-2-1, 15 KOs) will take his biggest step towards a potential world title shot when he faces super middleweight contender Jesse Hart (24-1, 20 KOs) in the 10-round co-featured event during Top Rank Boxing on ESPN, Aug. 19 in Atlantic City, New Jersey.

Headlining the card at the new Ocean Resort Casino will be a main event between heavyweight contenders Bryant Jennings (23-2, 13 KOs) and Alexander Dimitrenko (41-3, 26 KOs).

Both fights will air live on ESPN and ESPN Deportes at 10 p.m. ET. The entire card will be streamed live on ESPN+ beginning at 7 p.m. ET.

The bout between Gavronski, ranked No. 11 by the World Boxing Association, and Hart, who is ranked third in the world by the WBC and 10th by the IBF, will be for Hart’s North American Boxing Federation super middleweight championship.

“This is what you live for,” Gavronski said. “Hart is a tough guy who can do a lot of nice things. I just think I can do them a lot better. If you want to be the best, you have to beat the best. I am willing to fight anybody. I love the challenge.”

Gavronski, a native of Tacoma, Wash., will bring a five-bout unbeaten streak into his showdown with Hart.

“This is a huge test for Mike, but it’s one we believe he’s ready for,” promoter Brian Halquist said. “The winner of this fight places himself in a great position to fight for a world title the next time out. That has been what Mike has worked his whole career towards, to have that opportunity to challenge for a world title and it’s now right there in front of him. This is why we promote. To give these a chance to fight at the world level and to win a title.”

The 32-year-old Gavronski is 4-0 with a no contest since losing to Dashon Johnson on Nov. 7, 2015. During his current streak, Gavronski has notched victories over the previously undefeated Jake Carr, former contender Brian Vera, Quinton Rankin and knockout specialist Thomas Awimbono.

“Gavronski is a good test. He’s durable, and I know this fight will be great for boxing and boxing fans,” said Hart, whose only career setback came last September when he lost a decision to undefeated Gilberto Ramirez in a bout for the WBO Super Middleweight title.

Hart has since won his last two fights, knocking out Awimbono in February and defeating Demond Nicholson by seventh-round TKO in a bout for the NABF super middleweight title in March.

Gavronski made his pro debut on Jan. 9, 2010, defeating Darren Anzai by TKO at the Emerald Queen Casino.

After opening his career with a record of 14-0-1, Gavronski faced future WBC Silver middleweight champion Tureano Johnson for the vacant WBC Continental Americas middleweight title on July 11, 2014. Johnson would win by decision.

Gavronski responded to the setback by winning his next six bouts, including a victory over highly regarded journeyman, Dashon Johnson.

For more information, please visit the Battle at the Boat Facebook page and www.halquistproductions.co