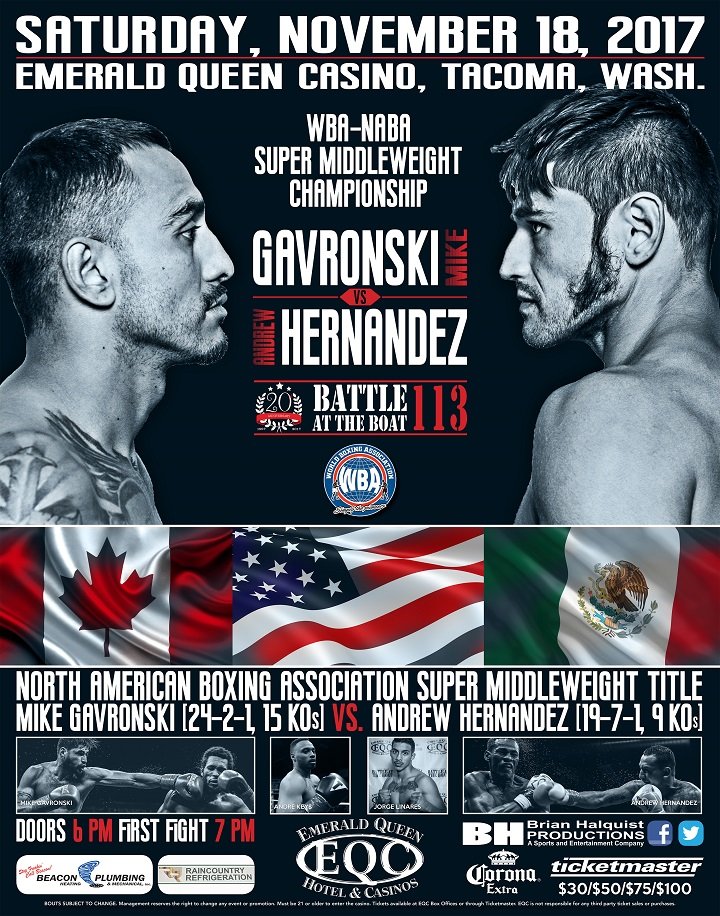 Mike Gavronski will face Andrew Hernandez for the vacant WBA-North American Boxing Association Super Middleweight championship in the main event of Battle at the Boat 113 on Saturday, Nov. 18 at the Emerald Queen Casino in Tacoma, Wash.

Gavronski brings a four-fight winning streak into the title bout, defeating veteran Brian Vera by TKO in his most recent appearance on Sept. 9, and has an overall record of 24-2-1 with 15 of his victories coming via knockout.

“Mike has earned this title fight. He has had a spectacular year and has now positioned himself to make some noise in the super middleweight division,” Halquist said. “A win here guarantees him a world top 10 ranking in the World Boxing Association. It brings him one step closer to fighting for a world championship.”

Gavronski, a two-time Tacoma Golden Gloves champion as an amateur, made his professional debut at the Emerald Queen Casino on Jan. 9, 2010, winning by TKO. He is 11-1 all-time fighting in his hometown of Tacoma.

Hernandez, a former WBC United States Middleweight champion, is 19-7-1 with 9 KOs. He opened 2017 with three consecutive victories, including a win over Sijuola Ade Shabazz for the vacant WBA-NABA USA Middleweight title.

This will mark Hernandez’s second time fighting at the Emerald Queen Casino. He defeated onetime contender Dionisio Miranda in Tacoma on March 26, 2016 after Miranda failed to answer the bell following the seventh round.

Battle at the Boat 113 will feature the VIP experience with 3rd Row Seats being discounted to $75 per ticket. All fans seated in in the VIP section (rows 1-3) will have an exclusive access point and a dedicated server to help create a true VIP experience.

Battle at the Boat 113 Card