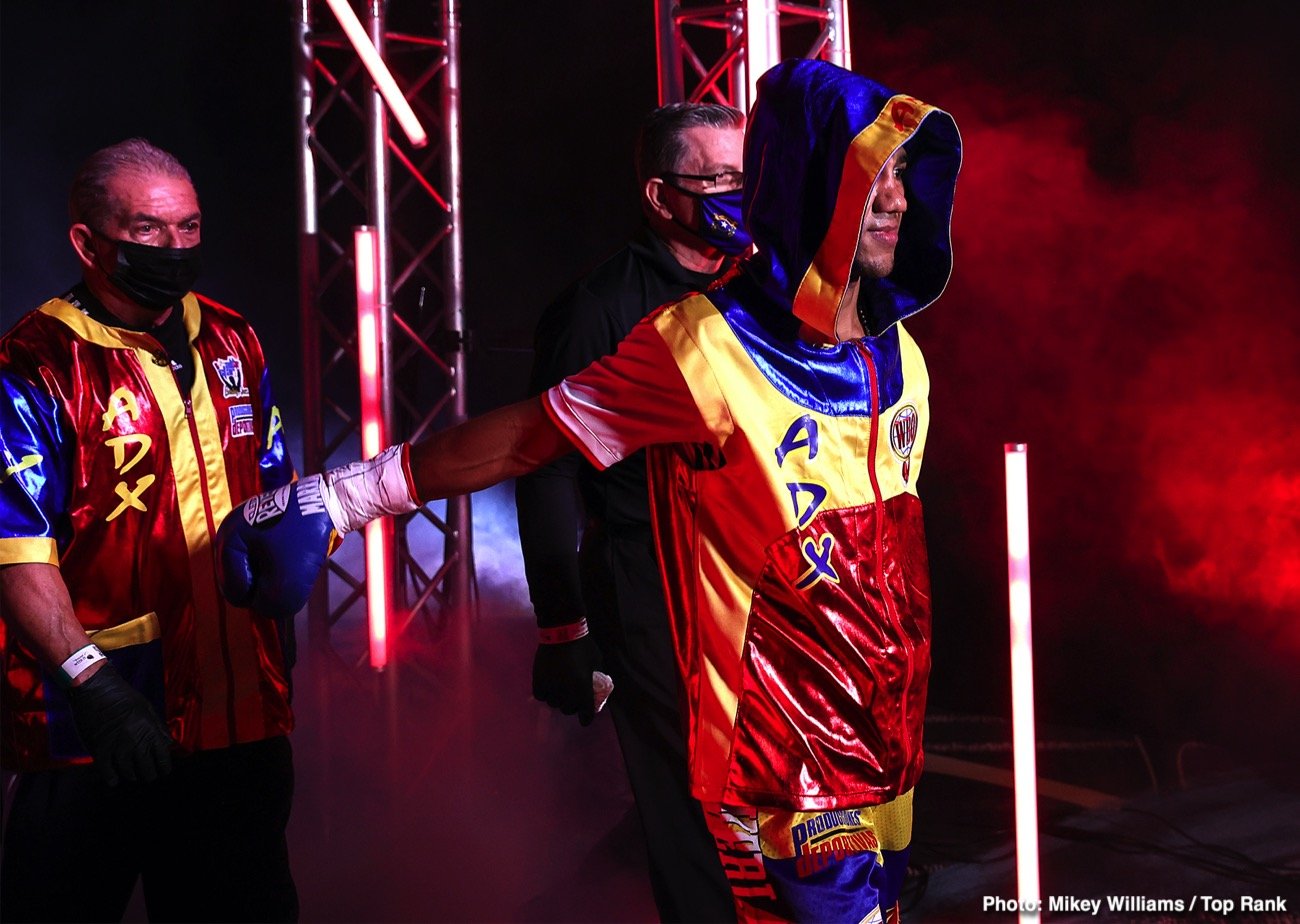 Championship Boxing returns to EstrellaTV on Friday, April 30, with the return of “Boxeo EstrellaTV” live at 10 P.M. ET/9 P.M. CT.

Here are the final final results of today’s weigh-in for all fights, which took place this afternoon at 2 P.M. ET/1 P.M. CT. In addition, the event was live-streamed on Facebook at @Produccionesdeportivasbox and is posted there here for the replay.

Both fighters commented on their upcoming main event title match during their respective training camps.

“In camp, I’ve been preparing to go in and fight in the Mexican boxing-style – strong, fast, a lot of action. I’ve had strong preparation, and self-confidence is not an issue. This sport takes a lot of discipline and effort. My cardio is strong, my strength and conditioning have felt great this camp, and doing 12 rounds of sparring in camp is not an issue. For me, mental preparation is very important, so I take time to meditate and walk. I train to be a real fighter, and I’m ready to get in the ring,” said Marriaga.

“I’m in the best shape I’ve ever been for a fight – I’m coming ready to fight! Every morning I run 10 km, and in the afternoon, I have an interval or strength or physical conditioning. I am looking for a win in this fight and taking my career to the next level. It’s my time to go!” said Garcia.

“Chicharo” hails from Saltillo, Coahuila, Mexico, and is a new and ambitious fighter who will be looking to make a statement in this title fight. His advantages are youth and a hunger for success. Christian Amador trains Chicharo.

Said fight Director, Ricardo Maldonado Jr., “Marriaga is a proven fighter. He’s faced the best in international boxing, and we are proud to have him on ‘Boxeo EstrellaTV.’ He brings excitement into the ring.  Garcia is a young man with big aspirations, and this is a big opportunity to face and potentially beat a fighter like Marriaga. A victory would put him at the peak of his career.”

The rising stars of Mexican boxing are the focus of the undercard.  Diego “Azabache” Torres, a young undefeated lightweight from Jalisco who trains under Miguel Ortiz, meets  Andrés Periban from Mexico City, a journeyman fighter who will test the inexperienced “Azabache.”

“Diego Torres is another great Mexican boxing prospect,” said Maldonado, Jr. “He is undefeated, and this is his chance to be seen by the world. The pressure is on as Periban has had the ring miles and has an impressive fight IQ.”

In the super welterweight matchup on the undercard, it is an eight-round fight between Diego “Maravilla” Carmona (8-1 & 7KO’s) vs. Carlos “Pitbull” Zavala (5-4 & 2KO’s). Carmona trains out of the Pancho Rosales boxing gym in Mexico City and is looking to add to his winning record. He faces the scrappy newcomer Carlos “Pitbull” Zavala, who’s had an impressive knock-out record in his first eight professional fights.

”The undercard fights are some of the strongest I’ve seen with some of our exciting young Mexican fighters. Carmona is one of the best prospects that Mexico has. He is in a very interesting weight class, and fans can expect a lot from him,” commented Maldonado Jr. “Carlos ‘Pitbull’ Zavala is going to test Diego ‘Maravilla’ Carmona. Zavala has had solid international experience. It’s an exciting matchup of two up-and-coming fighters.”

“Boxeo EstrellaTV” is a monthly fight night featuring the best in Mexican and Latin American boxing, airing on the last Friday night of every month through the end of 2021. It can be viewed on the EstrellaTV network, carried by most major cable carriers, and streamed everywhere on Samsung TV+, The Roku Channel, Xumo, and fuboTV. The series is produced by Producciones Deportivas and directed by Ricardo Maldonado Jr.

Producciones Deportivas has produced and promoted Mexican boxing for more than 30 years, working and evolving boxing in Mexico. Some of the legendary fighters they have worked with include Marco Antonio Barrera, Acelino ‘Popo’ Freitas, and Saul “Canelo” Alvarez.