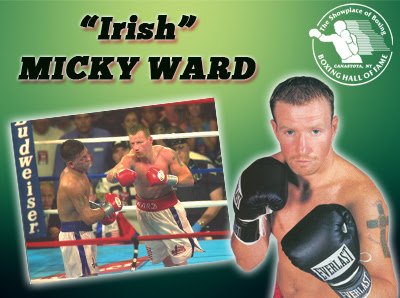 “The Hall of Fame is thrilled to welcome ’Irish’ Micky Ward to Canastota for the Hall of Fame Weekend festivities. He was a true warrior inside the ropes and his all action style made him a fan favorite,” said Hall of Fame director Edward Brophy.

Boxing out of Lowell, MA, Ward was one of boxing’s most exciting fighters. He turned pro in 1985 and used a crowd-pleasing style to register a 38-13 (27 KOs) record that includes wins over Shea Neary, Reggie Green and Emanuel Burton. In 2002 and 2003 Ward engaged in an epic trilogy with Arturo “Thunder” Gatti (1-2). Following their third bout Ward announced his retirement from the ring. During his career, the junior welterweight star was in “Fight of the Year” three times (2001 vs. Burton, 2002 and 2003 vs. Gatti). The Fighter, an Academy Award-winning motion picture chronicling his life, featured Mark Wahlberg as Ward and Christian Bale as his brother / trainer Dicky Eklund.

An impressive list of over 35 boxing greats from the United States and abroad will participate in the Hall of Fame Weekend celebration.