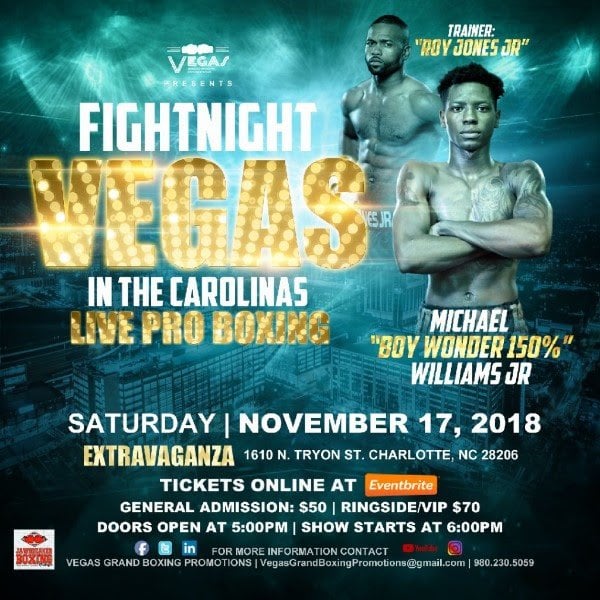 Michael Williams Jr. is bringing attention and respect to North Carolina boxing, and on Saturday, November 17, 2018, with Roy Jones Jr. at his side, the undefeated, North Carolina, boxing phenom is 150% ready to dazzle in the Co-Main Event on the Vegas Grand Boxing Promotions’ card at the Extravaganza Events Center in Charlotte, North Carolina.

Williams Jr. 7-0 (6 KO’s) is a big-time boxing talent with a megawatt smile and laid back but commanding personality. As Williams Jr. continues plowing through opponents and building his brand, he is assembling a loyal fan base and has picked up some jealous, vocal detractors along the way. Regardless of the attention, the maturity and dedication of this young talent continue to shine through his work in the ring and with fans.

Williams Jr. is not an ordinary kid. While most 19-year-olds would be chasing women, playing video games, and making youthful mistakes, Williams Jr. is focused on his goal of becoming a world champion superstar boxing celebrity. After seven months of professional boxing, Williams Jr. has tremendous support from his sponsors Jawbreakers and MatchBout, his team, and unwavering support from his family, especially his dad. Focused training from one of the greatest fighters of all time, Roy Jones Jr, adds extra spice and experience to Team Williams Jr. Williams Jr. is up early in the morning running three or four miles, he then goes to an afternoon training session led by Roy Jones Jr, and he attends a night session led by Jones Jr. Jones Jr. is a hands-on leader teaching Williams Jr. to work work work without a break and to push through fatigue and pain to be a champion.

Michael Williams Sr. isn’t shy about his commitment to his son, and he, more than Jr, wears his heart on his sleeve, especially when it comes to all of the jealous, negative attention his son entices. “This brings us closer. The way we are moving Mike Jr. If everyone would stop the hate, and compare what he has done with other fighters. Look at his boxrec and compare to anyone. No one has seen a fighter inside North Carolina move like this in years. It looks uncommon to them. It looks unreal. When people say we are moving Mike Jr. too fast, that is crazy. No one is saying that about Ryan Garcia or Devin Haney. There are a lot of people giving their opinions, but nobody has a world champion in North Carolina. Nobody has moved a fighter like Mike Jr, so how can they make these assumptions? It is crazy! We hear it and Mike Jr hears it. Don’t look at who my son is fighting against. Look at who he is sparring. Devin Haney, Shakur Stevenson. Real hard hitting dudes that push Mike Jr. We do that because we know there will come a time when Mike Jr. is put into the ring with some killers, and we have to be ready for it. This is a business. We have to build our brand, and he is supposed to knock these guys out. But, that doesn’t mean Mike Jr. can’t fight,” says Williams Sr.

Williams Jr. recognizes the blessings of his current situation, and he is thankful to GOD and grateful to all his supporters for what he has accomplished so far. Williams Jr’s reflection on all of the positives in his life inside and outside the ring make you understand why one-day he will be a world champion as well as a bona fide superstar: “I work hard for it. I thank GOD for what I have, but I sit back and have to say, I do train hard for this. It isn’t like anything was given to me. My training and my fights show it. It is a blessing, but I still have to do my part.”…Michael Williams Jr.

Lei’D Tapa Attempts To Stay Undefeated And Earn Her Third Straight Victory By KO November 17, 2018, On The Vegas Grand Boxing Promotions’ Card At The Extravaganza Events Center In Charlotte, NC

Charlotte, NC (November 13) – Lei’D Tapa is confident, not cocky. She challenges herself to focus on her training and how to best execute her coach’s plan which is to go in the ring, fight, and knock out her opponent. She is well prepared so Lei’D Tapa can confidently say, “expect a knockout November 17th on the Vegas Grand Boxing Promotions’ card!”

Lei’D Tapa A.K.A. Seini Draugh 2-0 (2 KO’s) is the “Queen of The Rings.” Lei’D Tapa has mastered wrestling, MMA, and now boxing. A star volleyball and basketball player in high school, Lei’D Tapa accepted a scholarship to play volleyball in college. After completing college, she played professional women’s football. While Lei’D Tapa loved playing football, she weighed the risk-reward on her body and decided to ask her famous wrestling uncle known as “The Barbarian” how to get into wrestling. The rest is history as Lei’D Tapa became famous wrestling on Impact and WWE shows.

Lei’D Tapa’s love for combat sports has led her to compete in multiple sports. She recently won a Jijitsu tournament in Las Vegas. A lack of opponents in the MMA heavyweight division has forced her to primarily compete in boxing, so she is grateful to Vegas Grand Boxing Promotions for finding her an opponent and having her on the November 17th card.

Lei’D Tapa, who is of Tonga descent, is driven to inspire others and in boxing, she wants to bring glamour and recognition to the women’s heavyweight division so the next generation of females can have more options. Lei’D Tapa wants all females to live by her mantra: “To be you and be great. Be the best you can be because it will lead you to achieve your greatness,”…Lei’D Tapa.

On November 17th, Lei’D Tapa will compete inside the boxing ring on the Vegas Grand Boxing Promotions’ card. She will be ready to go. Fans can expect a knockout and a “Surprise” ring entrance that will be out of this world. “BowDown. The Queen is Here!