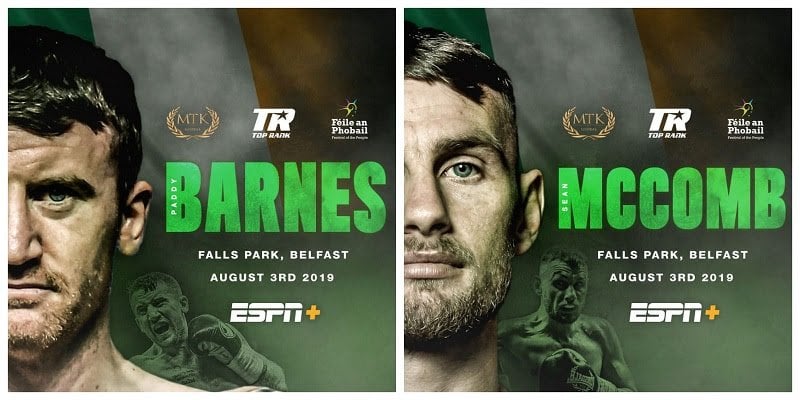 MTK Global is delighted to announce a UK broadcast and promotional deal with Frank Warren of Queensberry Promotions and BT Sport for Michael Conlan vs. Vladimir Nikitin at Belfast’s Féile an Phobail on August 3.

The agreement will bring the colossal #MTKFightNight to UK screens on BT Sport and be promoted by Frank Warren and the team at Queensberry Promotions who also promoted Conlan’s previous homecoming fight against Adeilson dos Santos to a packed audience in the SSE Arena last July.

Conlan (11-0, 6 KOs) collides with his former Olympic rival Nikitin (3-0) looking to avenge a famously controversial decision at the 2016 Rio Games and is delighted to his shot at redemption has another huge platform to a global audience with Top Rank and ESPN+ ensuring the action reaches American audiences hooked on #TheConlanRevolution.

Conlan said: “I’m delighted to be working with Frank Warren, Queensberry Promotions and BT Sport again. They broadcasted my Belfast homecoming night and that was a special night. This promises to be even better.

“I’m determined to exact revenge on Nikitin and set a record straight on August 3 and I want as many people as possible watching me do just that.

“To those lucky enough to have tickets to be there in person and to all those who will be tuning in from around the world; I can promise you a night to remember.”

The former world amateur champion’s older brother, MTK Global Professional Development Coordinator Jamie Conlan, said: “This is great news for the event, for Mick and for everyone involved.

“Given this is going to be one of the biggest – and certainly loudest – boxing events Irish boxing has seen for many years, having a giant UK broadcaster on board as well as a giant US broadcaster was always inevitable.

“We’ve always had a great relationship with Frank and his team and are delighted to agree this deal with them together with BT Sport and we look forward to working with them on creating a truly momentous occasion.”

Warren added: “Conlan vs Nikitin have unfinished business in the ring and it is fantastic to be bringing this show to BT Sport. Belfast is a massive boxing city; they really get behind their local fighters and August 3rd is going to be another big night of boxing for them to look forward to.”

Féile an Phobail Director Kevin Gamble said: “The announcement that BT Sport will now be screening the Michael Conlan fight night live from the Falls Park during Féile an Phobail along with ESPN+ is massive news.

“This is going to be one of the biggest nights ever in the Irish sporting calendar.”

Further news of fights and fighters starring on this unique event will be forthcoming in due course.

Local favorites Paddy Barnes and Sean McComb will star on the Michael Conlan vs. Vladimir Nikitin card at Féile an Phobail in Belfast on August 3.

MTK Global Professional Development Coordinator Jamie Conlan said: “This event just got even bigger with the additions of two more of Belfast’s classiest and most popular boxers in Paddy and Sean.

“Very few fighters challenge for a world title in their sixth professional fight but Paddy has never been one to shy away. Having won two Olympic medals as an amateur, he now has a big stage on which to relaunch his second assault on the summit of professional boxing.

“Sean, meanwhile, has been widely tipped by experts as one of the hottest prospects in the game. He achieved big things as an amateur as well and although he’s already fought at Windsor Park and at Boston’s TD Garden, fighting at Féile will be extra special for him too.”

“Paddy Barnes is a fantastic fighter and a great ambassador for boxing, who has excelled and achieved highly in the sport over many years.

“Seán McComb lives right beside the Falls Park Féile venue so this fight is literally in his back yard! An avid Gaelgeoir, he is an immensely popular, talented boxer with a great future ahead of him.

“The reception for Paddy and Seán in the Falls Park will be huge and we can not wait.”

The headline act on the night sees Conlan (11-0, 6 KOs) seek to resolve his long-running issue with Nikitin (3-0) after the Russian was awarded a highly controversial decision when the pair met at the 2016 Olympic Games in Rio.

Initial tickets for the event sold out in less than two hours with further tickets now available to buy at ticketmaster.ie.