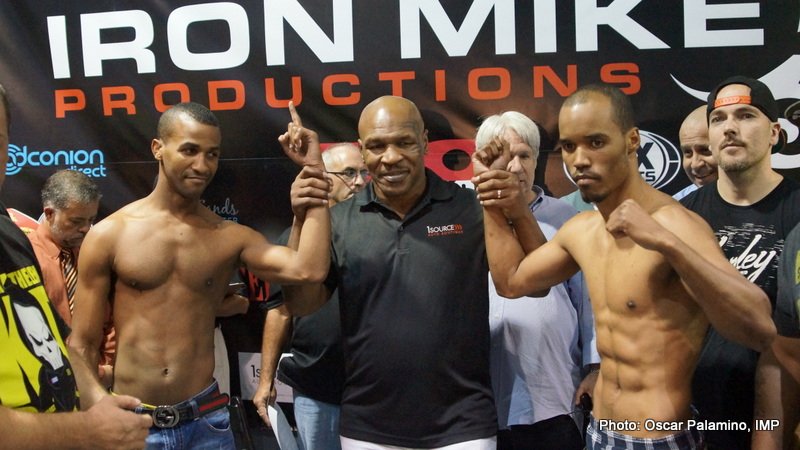 Tempers grew heated in front of the huge media crowd when the challenger, Barthlemey took the podium and was shadowed by a “fake” IBF Title belt, apparently as a way of insulting the champion, Mendez.

The initial bout between Mendez and Barthelemy which took place on January 3, 2014 in Minneapolis, Minnesota was initially and wrongly ruled a second round stoppage for Barthelemy. However, the decision was reversed and ruled a “No Decision” by the Minnesota State Boxing Commission as a video replay clearly showed Mendez being hit after the bell sounded to end the second round.

Since the January 3rd controversy, Iron Mike Productions has beaten the Barthelemy squad on four separate legal occasions and was therefore alarmed at the actions today at the press conference implying that the challenger was in fact the champion.

Opening the FOX Sports 1 telecast will be the nationally televised debut of heralded and undefeated 18-year-old welterweight prospect ERICKSON “The Hammer” LUBIN clashing with Mexican veteran NOE “Platanito” BOLANOS in a scheduled eight round bout.

The American Airlines Arena is located at 601 Biscayne Boulevard, Miami, Florida, 33132. For more information, please visit their website at www.aaarena.com. Doors will open on the evening of the event at 6:30 p.m. with the first bell at 8:00 p.m.