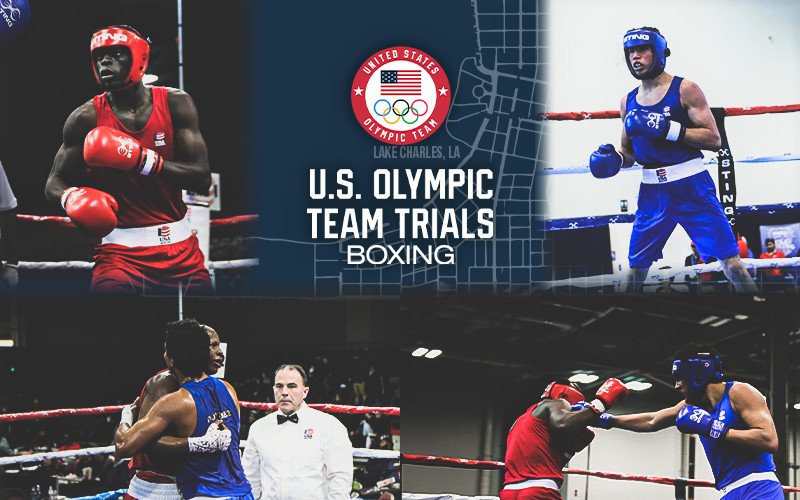 A total of 479 boxers competed in the four qualifying tournaments with hopes of advancing to Lake Charles. The top two boxers in each weight division will advance to the next stage of the selection procedures this January in Colorado Springs and compete for a chance to represent Team USA at the Olympic Games Tokyo 2020.

Here is a closer look at the boxers stepping into the ring in the eight men’s weight divisions.

The flyweight division will feature multiple exciting matchups, as all eight boxers will be looking to represent Team USA next year and follow in 2016 Olympic bronze medalists Nico Hernandez’ footsteps. 2019 World Championships team member and 2018 Elite National Champion Michael Angeletti (Spring, Texas) has hopes of using his great deal of international experience he gained this year to lead the pack, while two-time flyweight national champion (’16 and ’17) Fernando Martinez (Phoenix, Ariz.) will want to return to the top of the podium. 2018 Elite National Championships runner-up Abraham Perez (Albuquerque, N.M) has hopes of redemption to take the title. Youngster Ray Ray Robinson (Cincinnati, Ohio) punched his ticket to Lake Charles by winning the Eastern Elite Qualifier in his home state and his elite debut, and Jose Nieves (Avenel, N.J.) grabbed the title at the Last Chance Qualifier in Oxnard over an impressive field. Roscoe Hill is the second boxer from Spring, Texas to qualify in this division following his silver medal-effort at the Western Elite Qualifier in Reno. Los Angeles duo Anthony Herrera and Anthony Olascuaga round out the field. Herrera was victorious in Reno and Olascuaga finished second in Oxnard.

After falling short on his Olympic-qualification run in 2016, Duke Ragan (Cincinnati, Ohio) has been one of Team USA’s most successful boxers leading into the tournament, winning multiple international medals including a silver at the 2017 Elite World Championships and 2019 Pan American Games. However, a mix of youth and veterans will make this division one to watch. David Navarro (Los Angeles, Calif.) finished third at the 2018 Elite National Championships, but punched his ticket following Raymond Ford’s move to the professional ranks. Japhethlee Llamido (Norwalk, Calif.) and Rashiem Jefferson (Philadelphia, Pa.) had impressive runs at the Western and Eastern Qualifiers to earn the championship at those events, while Jonathan Mansour (La Mesa, Calif.) defeated an impressive field in Oxnard, Calif. to head to Lake Charles with momentum on his side. Bruce Carrington (Brooklyn, N.Y.), a competitor in the 2016 U.S. Olympic Team Trials for Boxing, and Kevin Montano (Concord, Calif.), have a great deal of experience on the national and international stage to make things interesting, while Xavian Ramirez (Reading, Pa.) qualified for the trials after just recently moving up to the elite division.

Arguably the deepest male division at the trials, the competition for the top two spots will be one of the toughest and most exciting of the week. 2019 Pan American Games and World Championships silver medalist Keyshawn Davis (Norfolk, Va.) has dominated on the national stage the previous two years, and will hope to continue his run, but will have stiff competition from the other seven boxers in this bracket. 2018 USA Boxing Elite National Championships silver medalists Dalis Kaleiopu (Waianae, Hawaii) will be looking for redemption after his close bout in the finals last year against Davis. 2015 Junior World Championships silver medalists Harley Mederos (New York, N.Y) hopes to repeat his impressive performance from the 2019 Eastern Elite Qualifier, while 2019 Western Elite Qualifier Champion Charlie Sheehy (Brisbane, Calif.) looks to return to the USA Boxing High Performance squad after being a member in 2018. 2019 Last Chance Qualifier Champion Ernesto Mercado (Pomona, Calif.) made the transition to the elite division easily after dominating throughout this year on the youth stage, including an international gold medal in March. Israel Rodriguez (Humble, Texas) surprised many when he took the second spot at the 2019 Eastern Qualifier, which will be a huge confidence booster in Lake Charles, and Marcell Davidson (Shawnee, Kan.) has the goods to reach the finals. Another boxer making the transition to elite this year, Daniel Garcia (Westminster, Colo.), secured the final spot after a strong performance in Oxnard, including a close matchup against Mercado in the finals.

2017 World Championship bronze medalist Freudis Rojas Jr. (Las Vegas, Nev.) and 2019 Pan American Games bronze medalist Delante Johnson (Cleveland, Ohio) headline a strong welterweight division. Marques Valle (Wesley Chapel, Fla.) surprised many at last year’s Elite National Championships, defeating some of Team USA’s top competitors, to secure his spot. Kelvin Davis (Norfolk, Va.), the older brother of Keyshawn Davis, will be looking to pick up where he left off in Ohio, while Victor Aranda (El Paso, Texas) enters as the Western Elite Qualifier Champion. Lavars Carter (Cincinnati, Ohio) earned the final spot, and could see a potential third matchup against Johnson, as they met in Salt Lake last year and the finals of the Last Chance Qualifier, with Carter winning in Salt Lake and Johnson in Oxnard. Wayne Bourdreaux (Marrero, La.) will be looking for a strong performance, as he is one of the few Louisiana natives in the field, and Morris Young (Chesaning, Mich.) will be hoping to improve on his silver medal performance in Reno.

Expected to be another weight division with exciting matchups, the middleweight division has the potential to see a fourth finals matchup between 2019 Pan American Games bronze medalist Troy Isley (Alexandra, Va.) and 2018 Elite National Champion Javier Martinez (Milwaukee, Wisc.). Isley took the national title in 2016 and 2017 over Martinez, while Martinez was victorious in 2018. However, both boxers will have to get through six talented boxers that will be hungry to end their finals runs. Kahshad Elliot (Plainfield, N.J.), Joseph Hicks (Grand Rapids, Mich.) and Antonio Garcia (Anaheim, Calif.) were crowned champions at the three qualifiers, and will look to continue their winning ways in Louisiana. Alexis Chaparro (New York, N.Y.), Francis Hogan (Weymouth, Mass.) and Alex Chisholm (Hialeah Gardens, Fla.) showed why they should not be underestimated with their qualifying performances and will be tough to get through in this bracket.

2018 Elite National Champion Rahim Gonzales (Las Vegas, Nev.) has the heart and determination to succeed in Lake Charles after falling short at the 2016 U.S. Olympic Team Trials for Boxing, while Atif Oberlton (Philadelphia, Pa.) has been on the rise following his silver medal performance at last year’s National Championships. Following the shuffling around of boxers who qualified in multiple divisions, Francis Oran (Allentown, Pa.) is the lone regional qualifier champion, taking the title in Oxnard at the Last Chance Qualifier. Orville Crooks (Brooklyn, N.Y.), Amir Ghaffari Nikou (Charlotte, N.C.) and Nasheed Smith (Washington, D.C.) qualified to these trials after finishing second at the Eastern, Last Chance and Western Qualifiers, respectively. Chavon Davis (Mansfield, Ohio) and Robert Magee (Byrnes Mill, Mo.) were added to the field following Javier Martinez and Adrian Tillman, the Eastern and Western Qualifier Champions in this division selected to compete in the other weight class they are qualified in.

After qualifying in two different weight classes, Adrian Tillman (Colorado Springs, Colo.) chose to compete in the heavyweight division with hopes of being one of the two boxers in this division, however, the 2018 Elite National Championships heavyweight silver medalists will have to fend off a tough bracket to advance. Najee Lopez (Ellenwood, Ga.), Brandon Moore (Lakeland, Fla.) and Devon Young (Aiken, S.C.) were crowned champions in the three regional qualifying tournaments and all three will be looking to continue their winning ways in a few weeks, while Joshua Edwards (Houston, Texas), Darius Fulghum (Rosharon, Texas) and Jamar Talley (Camden, N.J.) finished second in the regional qualifiers but could make it an interesting week in Louisiana. 2016 Elite National Champion and 2018 bronze medalists Cymone Kearney (Beaumont, Texas) was a late addition to the field after Jared Anderson moved to the professional ranks and could surprise many.

With the medical exemption of two-time USA Boxing Elite National Champion and 2019 Pan American Games bronze medalist Richard Torrez Jr. (Tulare, Calif.)** being accepted by USA Boxing, the super heavyweight division is wide open for the eight boxers competing in Lake Charles. 2019 Eastern and Western Qualifier Champions Jeremiah Milton (Tulsa, Okla.) and Antonio Mireles (Des Moines, Iowa) will look to be victorious once more after they stood atop the podium at their respective events to qualify, while Dominic Okopie (Houston, Texas) grabbed the Last Chance Qualifier title to secure his spot in the tournament. Luis Alvarado (Keonsha, Wisc.) made an impressive international debut earlier this year and will look to use that valuable experience over the other boxers in this division. Dacarree Scott (Decatur, Ga.), Pryce Taylor (Brooklyn, N.Y.) and Kenyon Walker (San Antonio, Texas) punched their tickets to Louisiana by placing second at their respective qualifying event, while Deandre Savage (Las Vegas, Nev.) will return to the national stage after qualifying to last year’s Elite National Championships.

Boxing will begin on Monday, Dec. 9 at the Lake Charles Civic Center, with the finals taking place Sunday, Dec. 15 at the Golden Nugget Hotel & Casino.

**Boxers who receive medical exemption from the 2020 U.S. Olympic Team Trials for Boxing will compete on Jan. 4, 2020 in a box-off against the runner-up of their weight division in Colorado Springs, Colo. for the opportunity to advance to the next stage of the athlete selection procedures**