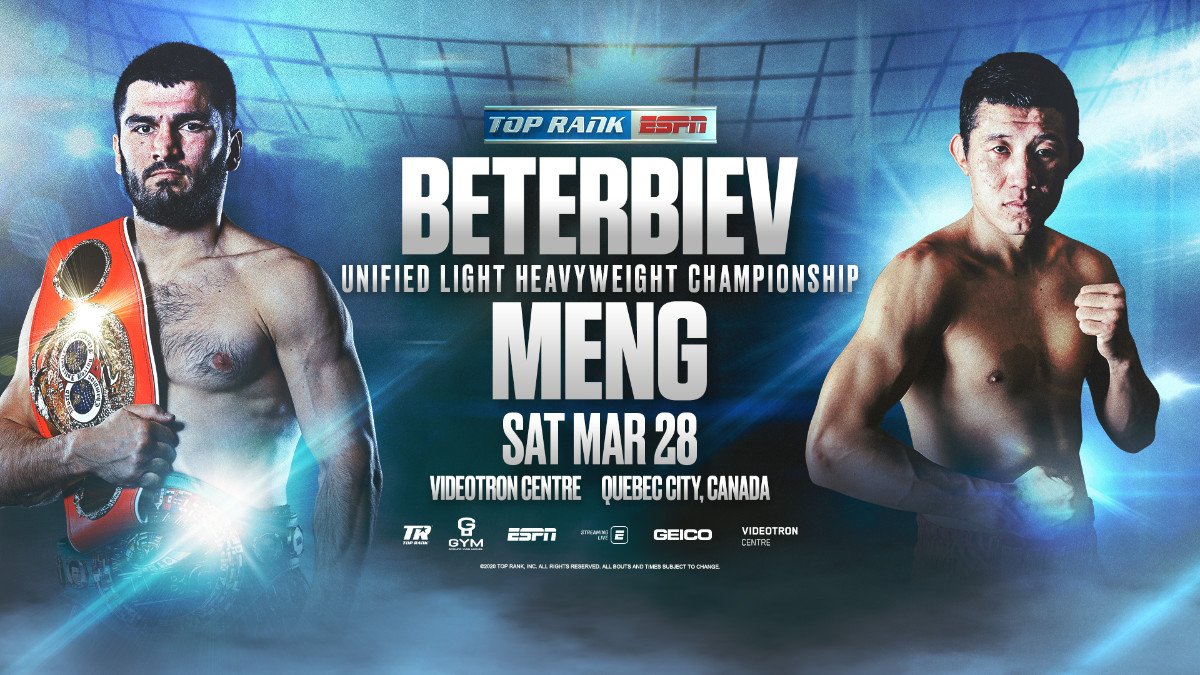 China’s Meng Fanlong (16-0, 10 KOs) will fight IBF & WBC light heavyweight champion, Artur Beterbiev (15-0, 15 KOs), March 28th at the Videotron Center in Quebec City, Canada. Beterbiev vs. Meng is presented by Top Rank in association with Groupe Yvon Michel and Gestev, and will be broadcast live on ESPN along with a co-feature bout at 10 PM ET.

Fanlong, who is from Chifeng, Inner Mongolia China, has more than just his world title shot on his mind. His home country has been essentially shut down due to the recent Coronavirus outbreak.

“The majority of my country has been shut down for weeks.” Says Meng. “My fellow citizens need something to help them escape from this very difficult time. I hope to bring some positivity, happiness, and joy to them with this fight. I want to put pride in their hearts.”

On the 28th of March, Meng will be stepping into the ring with one of boxing’s most dangerous punchers. Champion Artur Beterbiev has won all of his professional fights by knockout – including his thrilling title unification bout against Oleksandr Gvozdyck in October. Meng was in attendance that night in Philadelphia and observed with great interest.

But facing one of boxing’s most dangerous fighters in the ring pales in comparison to the concerns and troubles that are affecting hundreds of millions of Chinese across the globe.

“Fanlong is the best Chinese fighter in the world – everyone will learn that on March 28th.” Says Meng advisor Tommy Lane. “This is a historic fight because he is the first Chinese boxer to fight for the light heavyweight championship. And with what is going on with coronavirus, this is a fight that can bring joy and positive energy to the people at this challenging time.”

It is unknown when the coronavirus will be under control or when the citizens of the The People’s Republic of China can get back to normal life.

“My country needs me. We will get through this.”

Tickets for Beterbiev vs. Meng can be purchased at www.ticketmaster.ca or the Videotron Center box office Meng.

Meng Fanlong is a Chinese, undefeated, professional boxer who competes in the light heavyweight division. Meng has a long list of amateur boxing accomplishments, including earning a spot on the the 2012 Chinese Olympic team. He is now the number one ranked light heavyweight contender.