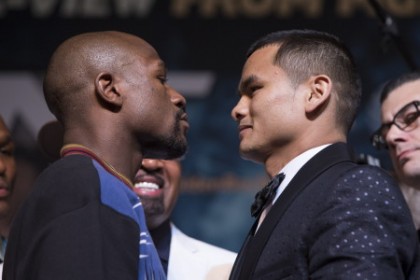 With Golden Boy Promotions CEO Richard Schaefer presiding, Mayweather urged the media and fans to tune into tonight’s premiere of Episode 3 of ALL ACCESS: Mayweather vs. Maidana for a revealing look into the family life of the pound-for-pound champ.

But the presser wasn’t all about “Money,” as an animated and well-dressed Maidana riled up the Hispanic media in the crowd with a Spanish colloquialism. Loosely translated: “I don’t give a (expletive) about this guy.”

Mayweather also announced that – for the 46th fight of his career – he’s invited 46 breast cancer survivors to attend Saturday’s fight and that he made a donation to the Susan G. Komen for the Cure that will provide the women with new wigs.

Below are quotes from Wednesday’s participants:

“If I feel like walking away I’ll walk away. I want to settle down and get married. Tonight you guys really, really need to watch ALL ACCESS. It’s going to be a good show tonight. Watch it.

“As of late, Marcos Maidana has been making a lot of noise. Is he one of the best in the sport? Yes he is. But I am the best. And that’s the difference.

“He’s tough, he’s rugged, he’s a champion. I respect him as a man, but come Saturday you have to earn my respect as a fighter.

“I never go in a game with a game plan. My game plan is to win and be first.

“I can’t overlook this guy. He earned it. Argentina is a great country and you all have a true champion. He’s a true champion, he’s a warrior, and he got here somehow, someway. He represents his country real well. I’m a worldwide figure, but I bleed the red, white and blue first.

“Giving back to the breast cancer survivors is a great feeling. It’s a great feeling when you’re in a position to give back. I’ll give anything back to our women. Our women are our queens so we have to respect them. I want to commend you ladies and tell you that you’re beautiful.

“I couldn’t ask for a better partner than SHOWTIME and MGM. Richard Sturm, you are a great guy, you are remarkable. Everything I asked of the MGM they have given me and more. I have a lifetime bond and a lifetime relationship with you guys. I respect this hotel.

“This is another champion of course, Bernard Hopkins. We don’t know what the future holds for us. He’s 49, I’m 37.” Bernard: “we’re almost 200 years old.” “Bernard’s another legendary champion that I take my hat off to. He’s done a lot to open the doors in boxing and I commend him for that.”

“No one has given anything to me. The opportunity, I earned it myself.

“I know this is a very difficult fight. That’s why I trained like never before.

“Mayweather is a great fighter, but I don’t give a (expletive) about this guy.

“It’s very important to land the combos and keep at him.

“I’m relaxed. We’re good. I talk a little trash because it gets me mad, gets me ready.”

“Top to bottom, this the deepest card we have ever promoted. You saw it yesterday when we had the fighter arrivals with a lot of fans from Argentina, a lot of fans from the United Kingdom. This really is an event where the boxing and sports world will unite here at MGM Grand. I personally can’t wait for the bell to ring. This is champion versus champion, this is country versus country. It is the pound for pound best fighter in the world, the guy who talks the talk and walks the walk, against a young hungry fighter in Marcos Maidana who literally punched his way into this fight. He is not the guy that talks the talk, but he is a guy that walks the walk. On Saturday night he is going to go in there – against all odds – trying to make the impossible possible – beating the pound for pound king.

“Maidana is hungry, he is ready and he wants it. No one gave him a chance when he came here to the United States against ‘Vicious’ Victor Ortiz. He made a first impression that is still with us. Again, no one is giving him a chance and that’s the position he likes to be in.

“It is always great to be back here in Las Vegas. This event is certainly one of the largest Las Vegas has ever seen. As a matter of fact, I pulled the record of the largest boxing gates in the history of Las Vegas and I’m proud to announce that this will be the fourth largest gate in the history of boxing here in Las Vegas — close to or maybe a little over $15 million. This is will be a great night for boxing once again.

“I truly believe in this fight Mayweather is playing with fire. It’s easy to underestimate someone like Maidana because he’s quiet. But once the first bell rings, it’s your fists doing the talking – that definition is Marcos Maidana. He has obviously done something right to be here today. This is not the end of his journey; this is the beginning of his journey. You have no idea what that means to him to be here and beat Mayweather. That’s all he wants.”

“This is the third SHOWTIME PPV Floyd Mayweather event, all three of which have been here at MGM Grand. Over his career, Floyd has fought at MGM Grand 12 times, which leaves no question that the MGM Grand is the home of the biggest and most important events in boxing and entertainment.

“As always, the staff here at MGM Grand has done a spectacular job marketing this event and setting the stage for what sure will be an exciting and entertaining show on May 3.

“I use the word ‘show’ intentionally. When it’s a Floyd Mayweather event, it is always a show. Floyd and Mayweather Promotions don’t do fights, they do events. Floyd puts on a show. And in addition to the thousands of fans, the biggest names in sports, entertainment and business come to watch: A-List actors, Fortune 500 CEOs, current stars from every sport – we’ve received ticket requests from all of them. And by my count, we’ll have at least 13 current world champions in attendance on Saturday night.

“This is boxing’s Academy Awards, Super Bowl and Grammys.

“I don’t know what’s going to happen on Saturday night and I don’t know who’s going to win or how. In fact, no one does. That unpredictability is one of the great things about boxing. But I can guarantee you one thing: Excitement. There is no other event like a Mayweather fight. There is no atmosphere that even comes close.”

“It’s a pleasure to welcome back Floyd Mayweather to his home at the MGM Grand. He looks to once again earn a win and run his record to 46-0. With a victory, Mayweather will put another stamp on the sports history books, and add another chapter in becoming the best fighter the world has ever seen.

“Marcos Maidana will make his return for the first time in nearly two years. It was Mexican Independence day in 2012 when he earned a decisive TKO in the MGM Grand Garden.

“The fight experience will not exist in only the MGM Grand Garden, as six of our 10 resort properties are offering closed circuit viewing in restaurants bars and lounges will provide guest with great food and beverage specials. We look forward to seeing you all Saturday night for this great event.

“We would like to give a special thanks to Golden Boy Promotions staff, Mayweather Promotions Team, Team Maidana and his camp and SHOWTIME. For the first time we would like to congratulate and welcome Bob Bennett, the Nevada State Athletic Commission’s recently selected executive director.

“We would like to thank everyone for coming out. This is going to be a fabulous event Saturday night, a terrific fight. The best fighter in the world versus a great, great fighter in Marcos Maidana.

“Floyd comes up with many creative ideas. He came to me about two weeks ago with this breast cancer idea. He has a tremendous heart. He doesn’t get a lot of credit for his philanthropy. We all see the flashy, flamboyant side of him, but that is all a part of entertaining. Deep down inside the true man, Floyd Mayweather is a giver at heart. He wanted to acknowledge and do something special for breast cancer survivors. He will be hosting breast cancer survivors [and a guest] to the fight on Saturday night. And he will be making a donation to Susan G. Komen for the survivors to purchase wigs.

“All this is history we are experiencing now. There may be other great fighters that come along, but I personally don’t feel there will ever be another Floyd Mayweather. We are all witnessing history. Floyd made an interesting comment yesterday that this very well could be his last fight. I was shocked – this was news to me. We have a long term deal with our partner, SHOWTIME. But we never know, come Saturday night this could be it. Any and everything we do is getting a glimpse of history. This will never be duplicated again – never.

“This is going to be a terrific fight come Saturday night. Maidana will bring the best out of Floyd. He will make Floyd bring out that ‘A’ game he talks about. We know Maidana comes to bring it. He will be coming at the opening bell trying to take Floyd’s head off. Floyd has prepared well, he has had an excellent training camp and he is ready to go.”

“I am glad my son and I we are back together and that he came back to me the way he did. This has nothing to do with money. I truly respect that he’s my son. I’ve been training him since he was one-years-old.

“Camp went great. Each of us have our own ideas, but when we get together on a strategy he is really a force. He is definitely ready to go.

“Maidana is a puncher and a strong fighter, but Floyd is faster and has more knowledge. I saw Maidana against Broner and, to me, he was very predictable, but Broner did not know what to do.

“I see Floyd coming out early, moving some and feeling him out while walking him down for a few rounds and then picking him apart. I’ve stressed that every time Maidana throws a punch, Floyd should counter with a right or left hand. Once he start countering Maidana, then he’ll go to the body. Look for Maidana to get nailed with a lot of body shots.”

ROBERT GARCIA, Maidana’s Trainer and BWAA 2012 Trainer of the Year

“The MOMENT is two days away and we had a great camp. Chino responded and did everything we asked him to do; everyone on our team did a great job.

“Against Broner, Chino proved everybody wrong, and he’s ready to do it again on Saturday.

“We have tremendous respect for Mayweather but on the day of the fight, Maidana is coming to win.”