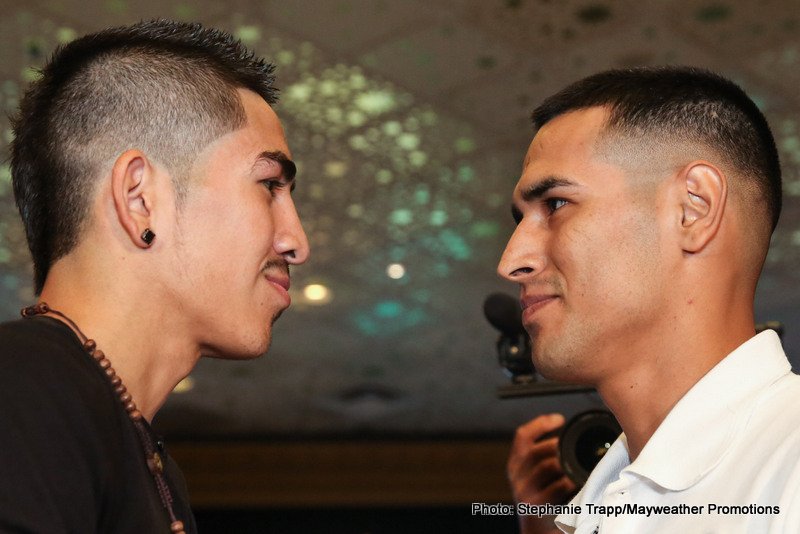 LAS VEGAS (Sept. 11, 2014) – Fighters on the televised undercard for “MAYHEM: Mayweather vs. Maidana 2” took center stage today at MGM Grand for the final press conference before they enter the ring this Saturday, Sept. 13 at the MGM Grand Garden Arena live on SHOWTIME® and SHOWTIME PPV®.

Here’s what Thursday’s press conference participants had to say:

“I’m very happy to be on this big undercard. This is the biggest card I could possibly be on.

“We trained really hard for this fight. It’s the biggest fight of my life because millions of people will be watching and I need to take advantage of that opportunity.

“I know people think this is going to be an easy fight for me, but you’re going to be surprised Saturday night. I used to spar with Roman and I had to train really hard for him because I know what he brings.

“I don’t underestimate anybody. Every fighter up there is dangerous. I have to go out there and work hard and give it my best to prove I belong here.

“I’ve trained so hard because I know I have a lot of pressure and expectations on me. I know Roman is a great fighter with great punches but we have to go out and do what we always do.

“People have said other Mayweather co-main event fighters are better and I’ve heard that. Because of that, this is definitely the biggest fight I’ve been in and I want to get the win and keep getting better fights.

“I have gotten love from fans too and I appreciate that. It’s because of them that I’m here and I keep training hard to get better every time.

“My brothers and my dad are always with me coming to the gym, watching me spar and it’s because of them that I’m so motivated for this fight.

“I’m looking to get the stoppage. I want it to end before 12 rounds and get him out of there and look good doing it.

“People are saying this is easy but no fight is easy. Anyone can surprise you so I always go out there and train like I’m fighting the best and I’m going to continue doing that.

“If everything goes well with this fight I definitely want to go out and get another belt and unify all the belts in the super bantamweight division.”

“I know we’re both well prepared and we know what to expect from each other.

“This is the opportunity of a lifetime and I’m looking to take full advantage of it.

“I know Leo well but this is a business and a tremendous opportunity for me. Winning a world title is every boxer’s dream.

“I’m happy for Leo and the success he’s had, but I’m confident and very well-prepared for our fight on Saturday. This will be a great fight for the fans.”

“I’m ready and well prepared. I have a tough opponent in Mickey Bey but I’m ready to win.

“I want to dedicate this fight to my family and my team and especially to God for putting me in this position to live my dreams.

“This is definitely a key fight for me and an opportunity to make a name for myself. I’ve been a champion a long time and made six defenses, but I know a lot of fans don’t know who I am. That’s why I am so looking forward to Saturday.

“I think I have extra motivation for this fight because it is my chance to show the world that I am a real champion and that I deserve to be on a card as big as this.

“I’m ready to defend and I am well-prepared for what I know is a tough opponent in Mickey Bey.”

“Saturday I’m going to do my part and make sure it’s a spectacular fight. If you’re not there tune in early and check me and Miguel Vazquez out.

“I’m just waiting until Saturday to put on a show. It’s going to be 36 minutes or less of nothing but fireworks. You’ll have to tune in to see what happens next.

“It’s just another day and another fight for me. I’m going to wait to face-off inside the ring.

“I have the best trainer in the world, the great Floyd Mayweather Sr. I’m looking forward to grinding and getting to the next level of the sport.

“I don’t believe in the hype at all. I believe in going toe-to-toe with someone and seeing what happens after. Vazquez has done something right to be where he is today. He’s the champ for a reason but now he’s fighting me and it’s a new day.

“I don’t look at social media during fight week. I stay away from the negativity. I don’t have time for anything except taking care of business inside the ring.

“I’m going to put on a spectacular performance on Saturday. I take it one fight at a time.”

“Whenever two Mexicans are in the ring it’s a really good show. I believe De La Rosa and ‘El Perro’ will put on a great show.

“At the 160-pound weight division, I am going to be a different animal. You’re going to see the old Alfredo Angulo.

“I’m going to show the fans, the critics and the media that I am ready.

“People are asking me if I am still going to have the power at 160 pounds, I don’t like to talk, I would rather just show it in the ring on Saturday.

“You can expect a spectacular fight. James De La Rosa is coming to win and so am I but I am the only one that is going to walk out victorious.”

“Come Saturday I’m looking to put on a show for everyone.

“You all haven’t seen my skills but I know you’re going to enjoy the fight.

“I just come out to fight and nothing else matters. After this fight, everyone will become a De La Rosa fan.

“You’ll see everything out of me. I can do everything. I box, jab, punch, and knock out opponents when the opportunity presents itself.

“I always go in looking for the win. If a knockout comes it comes. The W is all that ever matters.

“After this fight everyone will know about me and my skills. Not everyone gets an opportunity to open up a card as big as this. I’m going to put on a show and make a statement.

“The reason I took this fight is because it’s an opportunity to display my skills. It’s my time now.

“I’m the most versatile fighter. Whatever benefits me to win at that moment is what you’ll see me do.”

“A few years back I was just a guy fighting 4-6 rounders and now I’m here today getting ready to fight a great champion.

“You all know how I fight, I come to bring it. I’m going to bring the fireworks for a great show. I know Soto won’t take a backwards step and I wont either.

“We won’t need the judges for this show.

“I’ve had a great camp with my trainer and we added some great tools to my game and we’re ready to put them on display Saturday.

“Humberto Soto is a great champion, he’s experienced at the top level of this game, he’s someone I looked up to and now I get to look across from him in the ring and get it on.

“A win over Soto will put me right where I need to be at 140, whether it’s a rematch with Lucas Matthysse, Adrien Broner or Danny Garcia, that makes this win really important.

“I got my notoriety by taking the scenic route, the back roads and when I get in the ring I try to put it all on the line. I try to put on a show for the people who spend their hard-earned money on these fights.

“It’s been a long exciting road. I didn’t have an extensive amateur career so I had to take the small fights but I made a name for myself and now I’m here at the biggest stage of boxing fighting on a Floyd Mayweather card fighting one of the great past champions of all time in Humberto Soto.”

“I’m very glad to be here on a big showcase again. The winners will be the fans on Saturday night

“Like a true professional I respect John Molina and his team, but in that ring we are enemies and we’re going to put on a great show.

“We have studied his fights so we know what to expect. Experience is on our side and that is one of the keys to victory.

“I am very happy to be fighting in Nevada after all of the fights that I have fought. I hope to bring a victory to my fellow Mexican people.

“This could be the fight of the night and I encourage all fans to watch it because they will be in for a treat.

“I am very happy and grateful for this opportunity but I just want to win.”

“We’re here today to talk about this wonderful undercard; it’s going to be a terrific show.

“It’s never easy to put together an undercard and we did a great job putting together these fights to give the fans the best show possible on Saturday night.

“I believe that Mickey Bey will emerge victorious Saturday night. He’s worked very hard to get here and been through a lot of ups and downs in his career.

“Mickey Bey knows that he has a very tough opponent in Miguel Vazquez who comes into this fight on a 13-match winning streak dating all the way back to his 2008 loss against a terrific fighter in Canelo Alvarez.

“You have to tune in early or get to your seats early so that you don’t miss this great undercard we’ve put together.

“We’re very excited about this undercard. It’s customary for Golden Boy and Floyd Mayweather to put on exciting championship matchups with terrific fighters. We’re very proud of this undercard.

“You want to get out there early tomorrow to see all these prospects and future champions that will be on the card.

“Alfredo Angulo is one of the most popular fighters in the sport. I would say that he might have the best fans in all of boxing. They always support him no matter what, and I’m sure they’ll be out in full force Saturday night.

“The word star gets thrown around a lot in boxing. There’s very few in the sport, but everyone, the garbageman, the milkman, everyone wants to know when Leo Santa Cruz is going to fight again. He’ll fight anyone, that’s just the kind of guy he is.”