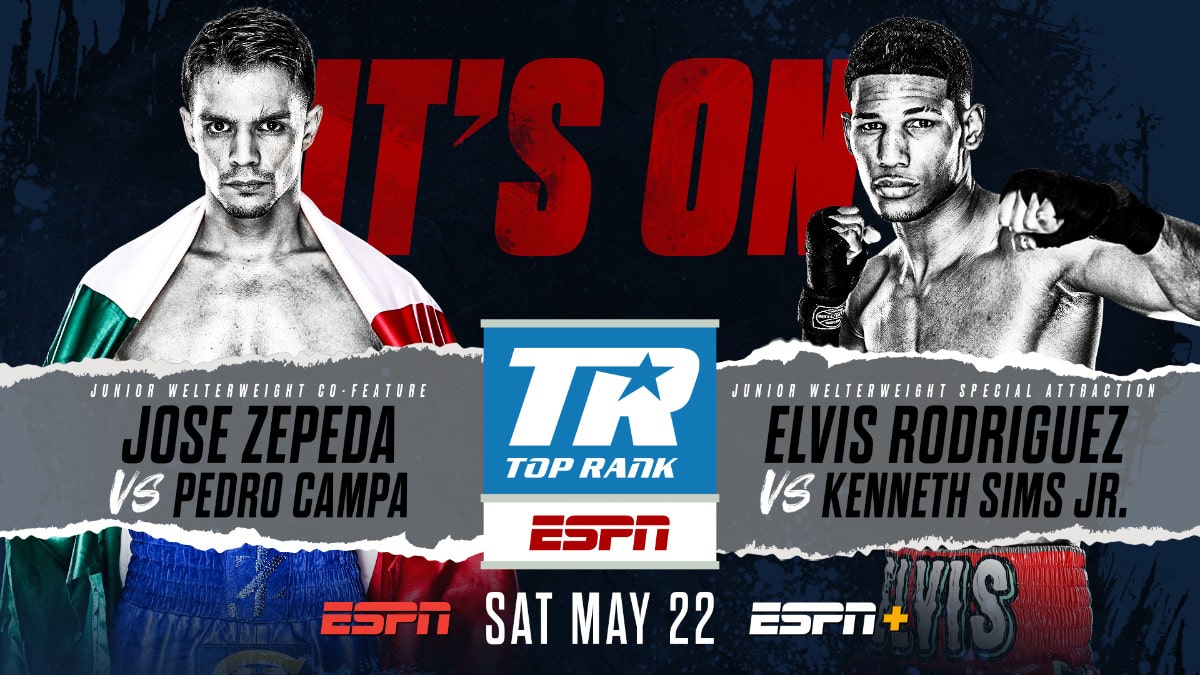 The most anticipated fight of the first half of 2021 now has some powerful backup.

This junior welterweight tripleheader will air live on ESPN and ESPN Deportes (simulcast on ESPN+) starting at 8:30 p.m. ET/5:30 p.m. PT. Location, venue, and ticket information will be announced shortly.

“The current and future stars of the junior welterweight division will be on display May 22,” said Top Rank chairman Bob Arum. “Jose Zepeda is one of the very best 140-pounders in the world, and he’ll have a chance to cement his status against a rugged Mexican in Pedro Campa. Elvis Rodriguez is a future world champion. Kenneth Sims Jr. is no pushover, but we believe this is the ideal next step as he continues his development.”

Zepeda (33-2, 26 KOs) is coming off last October’s fifth-round knockout over former world champion Ivan Baranchyk, the consensus 2020 Fight of the Year that featured eight total knockdowns culminating in the one-hitter quitter that ended the bout. A two-time world title challenger who pushed Jose Ramirez to a majority decision in their 2019 showdown, Zepeda is unbeaten in four fights since the Ramirez defeat, including a one-sided decision over two-weight world champion Jose Pedraza. Campa (32-1-1, 21 KOs), from Guaymas, Mexico, is 5-0-1 since the lone defeat of his career and most recently toppled veteran Carlos Cardenas by majority decision.

“I’m ready to go,” Zepeda said. After my Fight of the Year with Baranchyk, I’m better than ever. It’s only a matter of time before I become a world champion.”

He went the distance for the first time in his career on Feb. 20, topping Argentinian veteran Luis Alberto Veron by an eight-round unanimous decision.

Sims (15-2-1, 5 KOs), who lost to Jose Ramirez by one point at the 2012 U.S. Olympic Trials, has sparred with the likes of Manny Pacquiao and Jorge Linares in the paid ranks.

His defeats have come via close decisions to Rolando Chinea and Samuel Teah, but he has won two straight since the 2018 unanimous decision verdict to Teah.

Against Rodriguez, he has the opportunity to flash the amateur pedigree that saw him defeat the likes of current contenders Lamont Roach Jr., O’Shaquie Foster, and Albert Bell.

Rodriguez said, “I am happy and grateful for this opportunity, and I am going to make the most of it. It is a great step for my career, and I want to continue to show the boxing world that I have the talent to achieve great things.”