Mauricio Lara says he will “destroy” Josh Warrington when they meet for a second time at Emerald Headingley Stadium in Leeds next Saturday September 4 in what is a huge fight for the Featherweight division.

‘Bronco’ (23-2, 16 KOs) pulled off a sensational upset when the pair met at The SSE Arena, Wembley in February, flooring and ruthlessly finishing ‘The Leeds Warrior’ in nine brutal rounds to end Warrington’s unbeaten 30-fight record and put a huge dent in the former World Champion’s unification plans.

Warrington (30-1, 7 KOs) will be looking to exact revenge in front of a capacity crowd at the home of Leeds Rhinos in order to get his career back on track, but Mexico’s Lara – who has accused the 30-year-old of disrespecting his father – predicts that his rival won’t hear the final bell again.

“Warrington said that I got lucky,” said Lara. “Believe me. There’s no luck in boxing. I’ve never won anything with luck. I won with hard work and a lot of discipline. Of course, since I beat him I feel I’m the champion. Like they say in my town, I’m a champion without a crown. It sounds nice and I think I’ve earned it with hard work. I want to be number one in the world and I’m going to achieve that.

“I knew I had to win decisively in the first fight. This time it will be different. I’ll win, but you’ll see a totally different Mauricio Lara. I’ll be a different person. I have more drive in this fight because Warrington has been saying a lot of things and he’ll regret it. We think he’s going to be very careful with his face and his jaw so we’ll watch out with his strategy. But believe me, it doesn’t matter what strategy he has because I’m coming to destroy him. 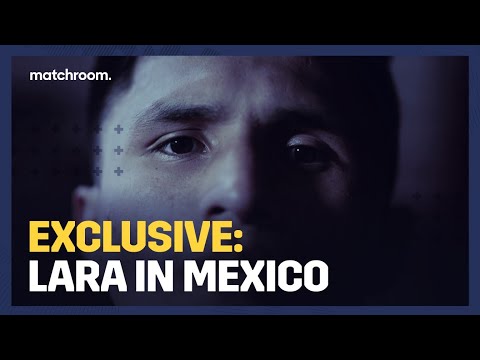 “I’m a very humble person. He won my respect in the first fight because he was number one in the world, but that’s no longer the case. He doesn’t respect me and he has said many things about my dad. He made a mistake, believe me. He met a friendly version of me and look what happened.

“I’m really happy because I know bigger fights are coming, better fighters. The number ones, that’s who I want. I want to be in that spot and I’m going to fight for that. It’s great that a promoter like Matchroom believes in me and is giving me that opportunity. I’ll fight whoever. I want all the belts at 126lbs and I’m going to get them. On September 4 I’ll be mean and he won’t know what’s hit him.”