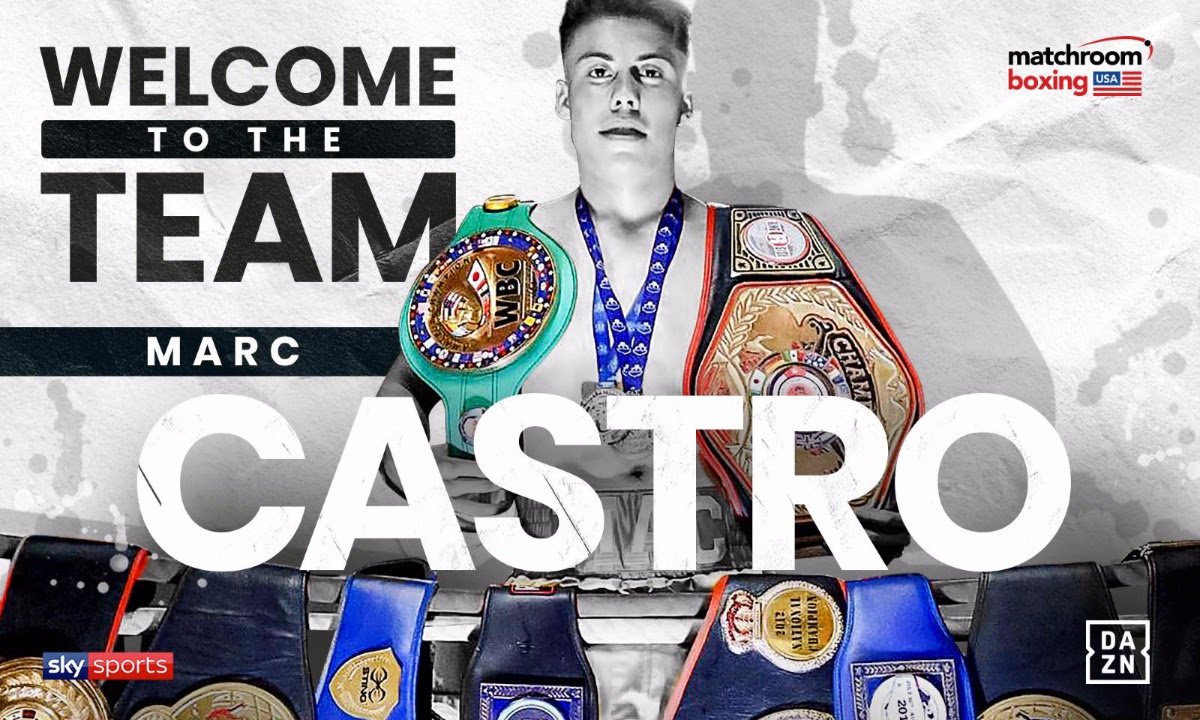 Amateur star was set to make pro bow in Tulsa on Saturday – Marc Castro’s pro debut has been cancelled after the fighter and his father-trainer Tony tested positive for COVID-19.

The Fresno talent had been ready to take his first steps in the paid ranks in Tulsa, Oklahoma on Saturday night, but that will now be put on ice after the receipt of his positive result from his test on the ground in Tulsa yesterday. Marc and Tony are now under quarantine and are isolated from the other fighters on the card and personnel involved in the show.

All other tests for fighters, their camps and all staff around the event came back negative and the card will go ahead as planned.

“We are all extremely disappointed for Marc that his debut has been postponed following his positive test for COVID-19,” said Dr. Rod Ballelos, Matchroom’s Chief Medical Officer.

“Marc and his father will now be under strict quarantine, and plans are being made to ensure the safety of everyone still involved in the event, as well as to not expose the community and contribute to this already devastating pandemic.”

“While it is upsetting news for all concerned, I believe the strict protocols that we have put in place – ensuring a negative test prior to travel to Tulsa, quarantine upon arrival to the hotel, then tested once again – have proven to be effective. Furthermore, social distancing, religious use of masks, and the sanitary practices we have put in place have also proved that such basic practices do work in preventing the spread of COVID-19.”

Rising Super-Welterweight Israil Madrimov (5-0 5 KOs) can close in on World title honors as he meets Eric Walker (20-2 9 KOs) in a final eliminator for the WBA World title while Madrimov’s fellow countryman Shakhram Giyasov (9-0 7 KOs) will now face Wiston Campos (31-7-6 19 KOs) after second replacement opponent Rey Perez was ruled out following original opponent Francisco Rojo being forced out of the bout after testing positive for COVID-19 during his training camp in his home city, and a pair of young talents complete the card in Nikita Ababiy (8-0 6 KOs) and Raymond Ford (5-0 2 KOs).

Castro leaves the amateur scene as a highly decorated former Team USA member. In 2015, Castro was the lone American to win a gold medal in Saint Petersburg, Russia at the Junior World Championships. In 2016 he won another gold medal for Team USA in Russia at the Youth World Championships becoming only the second American to ever do so, while also being the youngest member of the USA squad.

In 2017 and at the age of 18, Castro won his first men’s USA National Elite Title. Castro leaves the amateur ranks with a record of 177 wins and 7 losses with a stellar 48-1 record in international and national competition, and in addition to being a two-time Amateur World Champion, Castro is a 16-time National Champion, three-time National Silver Gloves champion, and two-time National Junior Olympics Champion, and Castro, who will meet the media for the first time as a pro in Frisco, Texas tomorrow, is itching to start his journey to the top in the pros.

“First I’d like to thank God because without him nothing is possible,” said Castro. “I am delighted to announce that I have signed a promotional contract with Eddie Hearn and Matchroom Boxing USA and a management contract with Keith Connolly.

“I am excited for this next chapter in my career, I achieved so much in the amateurs, and I look to continue that success in the pros with the right team behind me.

“I am always in the gym perfecting my craft and have made countless sacrifices to be in this position and I am not stopping now. My pro debut should be announced soon! I’m ready to get to work!”

Castro’s signaling of his intention to turn pro triggered a scramble for his signature, and his new promoter Hearn expressed his joy at getting his man.

“What can I say, we won the race to sign the one!” said Hearn. “Marc Castro is widely regarded as an absolute stud of the amateur game, an unbelievable fighter with superstar potential in the pro game. This young man is going to capture the hearts of American and Mexican fight fans and go all the way to the very top!”

“Marc is one of the hottest properties in world boxing,” said Connolly. “Marc has all the attributes to become a superstar both in and out of the ring, and we will manage his introduction into the pro ranks to make sure he maximizes his potential.

“Marc will be a huge hit with fans and pundits alike, and we are looking forward to working with Eddie, Matchroom Boxing, and DAZN to introduce this future star to the world.”