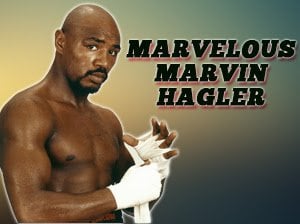 The International Boxing Hall of Fame announced today four-division world champion Pernell “Sweet Pea” Whitaker will be in Canastota to participate in the Hall of Fame’s 30th Anniversary celebration during the 2019 Hall of Fame Weekend, June 6-9th.

“The Hall of Fame means the world to me. It is such a special place,” said Whitaker. “When you’re inducted into the Hall, it is a beautiful thing. I’m happy to be part of the 30th anniversary and excited to return to Canastota.”

“’Sweet Pea’ Whitaker was a fantastic fighter who thrilled fans with his incredible skills inside the boxing ring,” said Hall director Edward Brophy. “We are so happy that the legendary Hall of Famer will be in Canastota to help celebrate the Class of 2019 and the 30th Anniversary.”

Fighting out of Brockton, MA under the guidance of Goody and Pat Petronelli, Hagler turned pro in 1973. He won the world middleweight title with a 3rd round TKO over Alan Minter on September 27, 1980 and over the next seven years successfully defended the crown 12 times with wins over Thomas Hearns, Roberto Duran, John Mugabi and Mustafa Hamsho among others. Hagler retired in 1987 with a record of 62-3-2 (52 KOs). Now based in Italy, Hagler was elected into the International Boxing Hall of Fame in his first year of eligibility in 1993.

“Marvelous Marvin Hagler is a legend and a fan favorite,” said Hall of Fame Executive Director Edward Brophy. “It’s very exciting to have him return to Canastota for the Hall of Fame’s 30th Anniversary.”