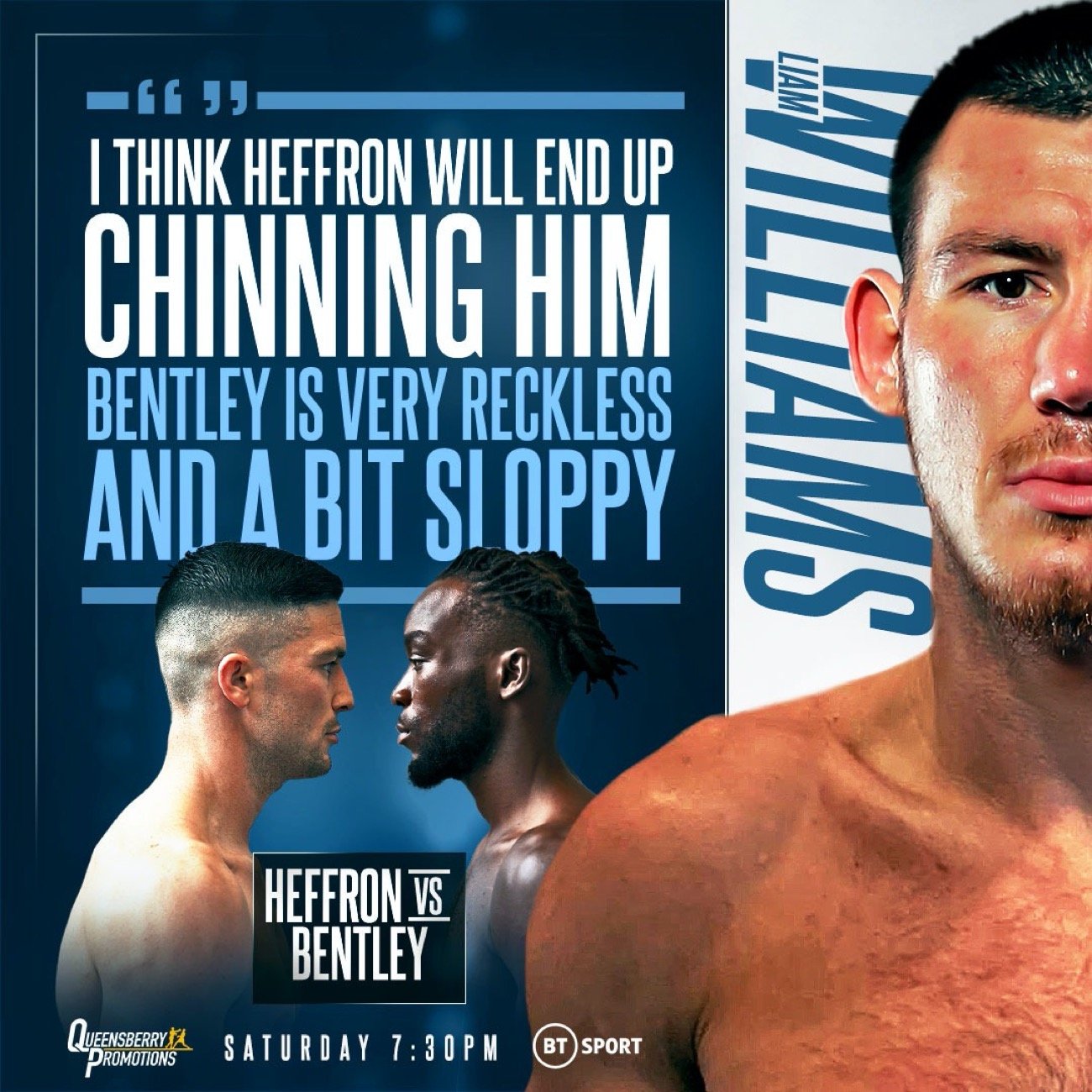 Despite his heated history with hardman Heffron, Williams reserved his most stinging comments for Denzel ‘2Sharp’ Bentley who he referred to as “reckless and sloppy”.

The much-anticipated tear-up between Heffron and Bentley is an eliminator for the British title held by Williams, who is no stranger to the two potential challengers.

‘The Machine’ has in-ring experience battling Heffron and shared social media barbs with Bentley in the past.

In the ring, Williams became a two-weight British champion at the expense of the then unbeaten Oldham man Heffron, who now clocks in with a record of 25-1.

Heffron came up against Williams on December 2018 after his mandated match for the Lonsdale belt – Jason Welborn – withdrew from the contest following the purse bid process. It caused more than a few ripples of anticipation when Williams was tempted to step up from super welterweight and take on the challenge against a known heavy puncher.

The fight was the catalyst of a run of form from the Welshman that saw him soar to mandatory position for the WBO world title held by Demetrius Andrade in the space of four fights – all spectacular stoppages.

Nobody could really have known, least of all Heffron, that we were to witness the birth of a middleweight force of nature.

That being said, Williams holds his former opponent in a high regard and strongly suspects he will have the beating of the hitherto unbeaten Bentley, who is also a known knockout merchant, with 11 from his 13 wins.

Williams believes there are weaknesses Heffron will exploit.

“I think it will be a good fight – a very good fight,” considered the 28-year-old, who works out of the Ingle Gym in Sheffield.

“I think Heffron will probably end up chinning him. Bentley is very reckless and a bit sloppy, I think so, from what I have seen.

“He is a little bit sloppy and, as everyone knows, Heffron is a very big puncher. I was actually sparring with Mark the other day and it was a good old dust-up. You would never expect anything less of Mark because he is a top fighter who comes to give it.”

Williams acknowledges that Heffron was unfortunate to come up against a man possessed when he introduced himself to the middleweight division.

“This is it, if it wasn’t for me being on my A-game or if he was against anybody else he would have become British champion. He just came up against the wrong person that night because I was hungry and firing on all cylinders.

“He came up a bit short, but I think he will become British champion another time. I actually think as soon as he challenges again he will become champion.”

So has Williams noted a narrowing of the gap between himself and Heffron from their recent spar-wars?

“With me and Mark, with the build-up we had and stuff, at the time I genuinely didn’t like the boy and I wanted to hurt him. But, in all fairness to him, I do think he is a sound lad and we get on good now because it is just a sport and we had to put that behind us.

“He is fighting to provide and so am I. We just happened to come up against each other and it was me that came out on top.”

MARK HEFFRON BELIEVES his hugely anticipated showdown with Denzel Bentley will develop into the shootout everyone expects but reckons a few cagey rounds could precede the firefight.

The middleweight bangers collide inside the BT Studio on Saturday night – live coverage begins on BT Sport 1 from 7.30 pm – and the 25-1 Heffron was forthright in his initial assessment of how the fight will go against the unbeaten Bentley, 13-0.

“I’m gonna demolish him!” was his opening gambit.

“I don’t even know how it will play out… It could be a bit of a chess match at first, but after a few rounds, it will get lively.

“I don’t think he is the best of boxers, to be honest, and he was all over the place when Mick Hall put it on him. I think the only thing he can do is come forward.

“I don’t think he has been hit before, but I have got to be smart in what I do.

“This will get me right back on track, get a good win over Denzel, and it should put me forward for big titles. I 100 percent still want the British. Hopefully, after beating Denzel, I will be fighting for the British in December.”

The 28-year-old Heffron has resisted a recently stated intention to move up to super-middleweight and has instead been going over some old ground in the gym with the only man to have beaten him as a pro. What he doesn’t intend to do, unlike Liam Williams, is engage in any verbal warfare with Bentley because this is a fight that speaks for itself.

“I have sorted my diet correctly now, and my weight has come down by itself. It is almost bang-on already.

“We had a good spar, me and Liam, but I didn’t chin him, and we did eight rounds. In one of the competitions, they had to stop it and tell us both to calm down a bit.

“I’m just going to keep myself to myself and do my thing in the ring. I did call him a silly sausage once, but I’ve got no hard feelings towards Denzel, and he has not said anything wrong about me.

“He seems like a nice lad, but this is business, and he is in my way,” added the Oldham man, who is fully embracing the prospect of fighting without his army of fans urging him on.

“I am ready for all the new stuff, and I am looking forward to just chilling out in the hotel. I think fighting behind closed doors might be better for me because when all the crowd is going mad, you are not as focused.

“This time, you will see the best of me even though I would have done hundreds of tickets for this one. This camp has been a lot easier with not messing around so much sorting out tickets.”

Without having to cater to the ticketing demands of the Oldham public, Heffron has been able to settle into a routine with his latest trainer in Michael Jennings, the former British welterweight champion and world title challenger.

“I’ve had a few, haven’t I…” conceded Heffron on his multiple moves.

“I am happy now 100 percent, and this is me now with Michael. I am buzzing with him, and I have learned so much over the last seven or eight weeks. I am just ready now to go, and I can’t wait.

“For this fight, with Michael, we have got an absolute banging game plan, and everything is working. We’ve, and the perfect sparring for Denzel and I have been putting the plan into action during the sparring.”

Mark Heffron and Denzel Bentley will fight on BT Sport on Saturday, September 12, on a card that also features the return of Anthony Yarde to light heavyweight action against Dec Spelman.

The IBF European title will also be on the line at welterweight when the holder Cedrick Peynaud defends against English champion Ekow Essuman. Nathan Gorman returns to the heavyweight picture against Richard Lartey, with lightweight Bilal Ali, featherweight Amin Jahanzeb and debut making super welterweight Josh Frankham also on the card.