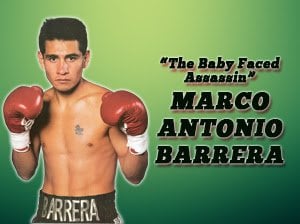 The International Boxing Hall of Fame announced today three-division world champion and 2017 Hall of Fame Inductee Marco Antonio Barrera will be in Canastota to participate in the Hall of Fame’s 30th Anniversary celebration during the 2019 Hall of Fame Weekend, June 6-9th.

“I’m so excited to celebrate this special moment with a lot of boxing favorites and greatest. This is important because it preserves boxing history at its finest,” said Barrera.

“Marco Antonio Barrera was a superbly talented boxer who thrilled fight fans across the world during his legendary career,” said Hall of Fame director Edward Brophy. “The Hall of Fame is thrilled to welcome ‘The Baby Faced Assassin’ back to Canastota to help celebrate the 30th anniversary.”