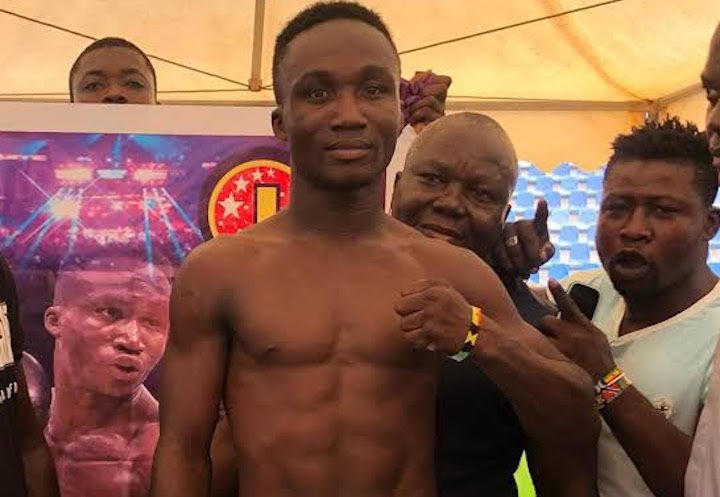 By Sammy Heywood Okine – Sensational skillful and stylish boxer, Jessie Manyo Plange who was recently voted Best Professional Boxer in Ghana 2020 by boxing journalists has been tipped to wear a world title belt.

With a record of no defeat in 21 victories against one draw, he is seen by many boxing experts as a star of the future and plans are advanced to get him a world title shot. He currently holds the West African Boxing Union Super Fly Title.

His manager, Tony Tolj has started negotiations by contacting Tom Brown of TBG Promotions for a showdown with Gary Antonio Russel.

Manyo Plange is now ranked by two world boxing bodies. He is number 2 on the WBA bantamweight ratings and number 9 in the WBO super flyweight division, but he feels he can beat the American who has also not lost in 18 fights.

In an exclusive interview with Tony Tolj, he was very confident that Plange will defeat Russel, and wants the fight to come on as soon as possible.

Plange is coached by Lartekwei Lartey who was also voted joint winner of the trainer of the year by the Boxing Writers Association of Ghana (BWAG).

The Tony Tolj managed Jessie Manyo Plange aka ‘Black Flash’ has been voted overwhelmingly as best Professional Boxer of the year 2020 by the Boxing Writers Association Ghana (BWAG).

Coach of the year was share by Carl Lokko of the Bronx Gym and Lartekwei Lartey of the Fit Square Gym.

Promoter of the year went to Box Office headed by Mr. Alex Ntiamoah, with Manager of the year going to Mr. Ivan Bruce Cudjoe of Cabic Management fame for managing to organize the broadcast of the Boxing Day Rumble on GTV Sports Plus.

Boxing Referee / Judge of the year was taken by Erasmus Owoo.

In the amateur division, the Best Boxer went to 20 year old Samuel Takyi aka ‘Ring Warrior’ who has qualified for the Tokyo Olympic Games.

Prince ‘The Buzz’ Larbie was voted as the Best Juvenile Boxer.

Best Boxing Facility went to the Bukom Boxing Arena inside the Trust Sports Emporium in Accra.

Mustapha Nettey, a member of the Boxing Writers Association Ghana said the year under review was very challenging as Covid-19 did not allow many boxing events to be held, however those who exceled in the nine categories must be recognized and rewarded.

He hoped that the Awards will get better as the years roll on.

“This is our premier programme and all the winners will receive plaques, we hope to celebrate our boxing heroes the best way that we can” he added

He said with the support of his manager, Tony Tojl who is based in Australia, they are managing affairs well to get the boxers in top shape before he cracks at the title held by experienced champion Cuban Guillermo Rigondeaux or Gary Antonio Russel, one of the fine boxers in the division and currently situated at #1.

Since Plange, 32 moved up to number 2 in the latest World Boxing Association (WBA) ratings, his confidence has soured and he has stepped up his training.

He has won all his 20 fights with a contraversial draw which he feels he won against Michael Dasmarinas at the Marina Bay Sands Hotel in Singapore.

Plange, ex captain of the national amateur boxing team, the Black Bombers is one of the most loved boxers and many Ghanaians believe he can become a world champion.

According to Boham they are going to make him one of the legends of Ghana Boxing. He thanked Dr. Arthur, John Marfo and others who have supported the budding champion.

In an exclusive chat with West AustralianTony Tolj, he said Plange is on the list of 60 boxers whom they are managing and promoting to become world champions.

Jessie Manyo Plange won silver at the 2007 All-Africa Games and participated at the 2008 Summer Olympic Games and the 2006 Commonwealth Games.

He was recently voted best Boxer in Ghana for 2020.