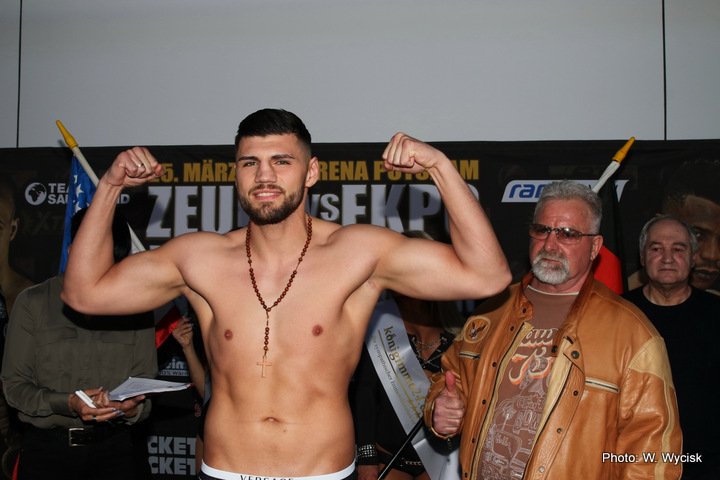 Kevin Lerena (21-1, 9 KOs) says he is fully focused on Artur Mann (15-0, 8 KOs) as ‘The KO Kid’ puts his IBO World Cruiserweight title on the line against the German challenger on Saturday at the Emperors Palace in Johannesburg.

Lerena claimed the IBO strap with a split decision over Youri Kayembre Kalenga in September 2017, before successfully defending his belt with unanimous points wins against Dmytro Kucher and Roman Golovashchenko.

Heading into his third defence, the 26 year-old insists he is leaving nothing to chance, and admits he has even been waking up thinking about his opponent.

“I know everybody is talking about Oleksandr Usyk moving up to heavyweight, and what’s going to happen to his belts, but to be honest, I don’t really care,” said Lerena. “My only focus is this fight. I wake up and think of Artur Mann.

“I know I need to take care of business against him. He’s 15-0, he’s coming off a very credible record, and he has my full attention. This is a big fight for me. Yes, on paper, I’ve had big fights before, Kalenga, Kucher, Golovashchenko, Nielsen, but these are in the past, and I need to focus on what’s in front of me.

“I’m war ready! I know he’s going to bring it, and I’m going to bring it too. I’ve never been a guy to cherry pick opponents. I want tough fights because I believe I elevate myself the harder the fight, and I enjoy the challenge.”

Lerena’s coach Peter Smith, of Smith’s Gym, echoes his fighter’s sentiments, and states they will not be taking the Hannover-boxer lightly.

“This is a serious fight for us,” he says. “We’re not overlooking Artur Mann in anyway. Artur is a serious opponent with a great team behind him. We’re taking this fight very seriously, and looking forward to a great battle!”

Lerena-Mann is a co-promotion between Team Sauerland and South Africa’s premier promoter Golden Gloves, led by Rodney Berman, who describes Saturday’s match-up as one of the country’s ‘biggest cruiserweight fights ever’.

“This has got to be one of the biggest cruiserweight fights ever in South Africa,” said Berman. “It’s common knowledge that Usyk is going to be moving up, so now every other cruiserweight is fighting for their place in the sun, and Kevin will be the only remaining World Champion when he gives up the belts.”

Artur ‘Thunder’ Mann (15-0, 8 KOs) has arrived in South Africa ready to realise his World title dream as he challenges Kevin Lerena (21-1, 9 KOs) for the IBO Cruiserweight crown on Saturday at the Emperors Palace in Johannesburg.

The 28 year-old Hannover-hotshot is full of confidence as he enters his first World title contest following convincing wins over teak-tough Russian Alexey Zubov and the previously undefeated Alexander Peil in his last two bouts.

Having added legendary Cuban coach Pedro Diaz to his training team, Mann believes everything is in place for a memorable victory as he goes behind enemy lines in an attempt to dethrone the Johannesburg-native.

“First of all, I would like to thank my promoter Team Sauerland, and Golden Gloves, for this great opportunity,” said Mann. “My dream has always been to box for World titles, but I never thought it would happen so quickly.

“I’m excited and extremely motivated to challenge Kevin Lerena for the IBO belt here in South Africa. I know Lerena is a tough opponent, but there are no easy fights at this level, and I wouldn’t be here if I didn’t think I could win.

“Lerena is a World Champion and deserves the utmost respect. He’s currently among the top five cruiserweights in the world, a position you have to earn. However, I believe I’m the more complete fighter, and I will give everything in the ring to prove I’m the better man, and to bring the belt back to Germany.”

“Pedro works meticulously. With him, a lot of the emphasis is placed on our physical fitness and getting the right technique, but above all, it’s on the tactics. He analyses each of his fighters and their opponents in great detail, and that amount of detail can make all the difference at World level.”

The IBO World Cruiserweight title showdown between Kevin Lerena and Artur Mann is a co-promotion between Team Sauerland and Golden Gloves. German boxing fans can watch all the action from the Emperors Palace live on Sport1.

Mann, undefeated in fifteen professional contest, lands this dream World title shot following a unanimous points win over Alexey Zubov in Chicago, and is full of confidence as he travels to South Africa in search of World glory.

“This is the moment I’ve been working my whole life for,” says Mann. “Who would have thought a year ago that today we would be preparing for an IBO World title fight in Johannesburg. I can’t thank my promoter Team Sauerland and the Sauerland family enough that this dream could be realized so quickly. Thanks also to my management Daniel Todorovic and Marius Schulze.

“This is a huge opportunity, and one I will not miss. Kevin Lerena will certainly have a home advantage as the reigning champion and local hero, but I like a challenge, and I’m convinced I will bring the IBO belt home to Germany.”

Lerena claimed the IBO strap with a split decision win over Youri Kayembre Kalenga on September 9, 2017, and has since recorded two successful defences against Ukraine’s Dmytro Kucher and Roman Golovashchenko.

“I’m excited to be back in the square jungle against such a formidable opponent as Artur Mann,” he said. “The public can look forward to a fan friendly fight with no quarter asked or given. Whilst I respect Mann’s record, only one hand will be raised in victory – AND STILL – This is the year of Kevin Lerena !”

“Kevin Lerena vs. Artur Mann for the IBO Cruiserweight title at the Emperors Palace – an evenly matched and mouth watering fight between two outstanding boxers,” said Rodney Berman, for Golden Gloves. “Both can ill afford a loss at this stage of their careers with the cruiserweight division enjoying such popularity, which is in no small measure due to the World Boxing Super Series.

“We look forward to staging this main event in association with Team Sauerland with whom we have always enjoyed an excellent relationship.”

“We’re delighted to be working with Rodney Berman and Golden Gloves to deliver this spectacular cruiserweight Wold title showdown,” said Nisse Sauerland, for Team Sauerland. “This is a fantastic opportunity for Artur and one he must seize with both hands. I’m expecting a fan friendly contest, with both men leaving it all on the line. Germany is due a World Champion, and now Artur has the chance to write his name in the history books.”