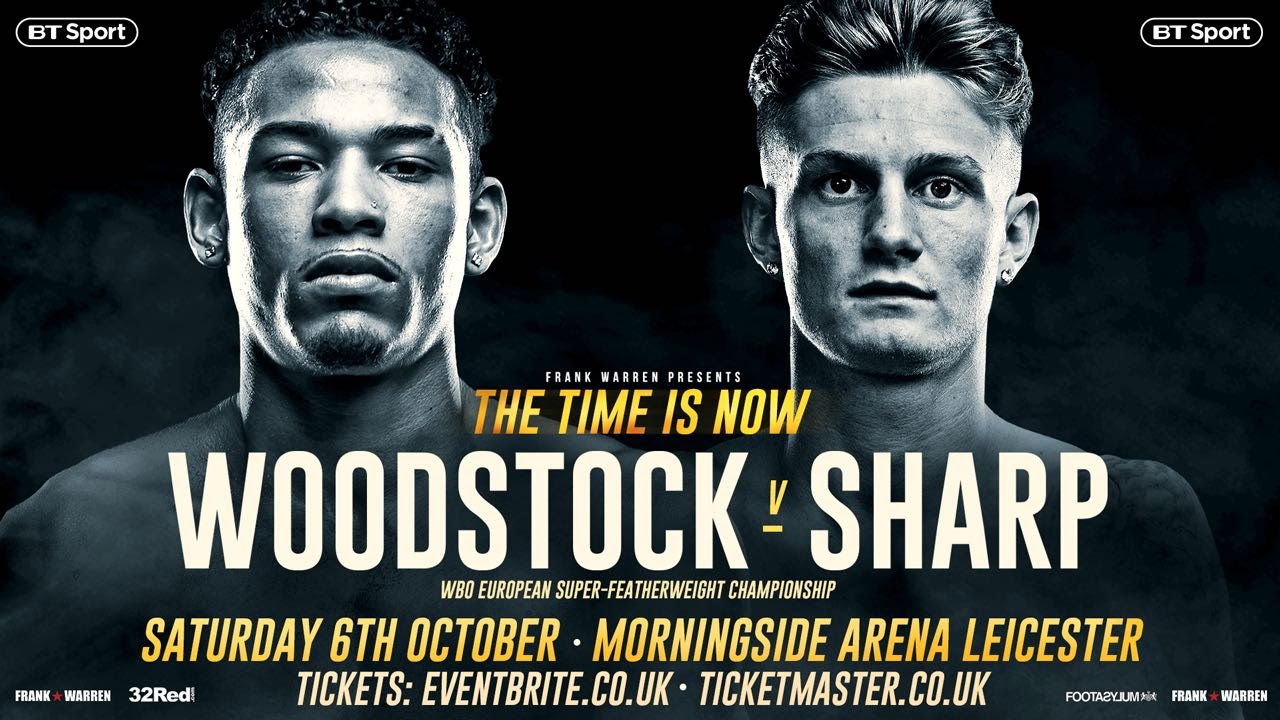 Upcoming foe’s Lyon Woodstock and Archie Sharp continue to exchange words in the build up to their clash on October 6th for the WBO European Super-Featherweight title.

Woodstock (11-0) and Sharp (13-0) have been trading verbal punches through social media, beginning months before their fight was even announced.

“I didn’t even know who the guy was until somebody showed me the tweets he was putting.” admitted the current owner of the belt, Woodstock.

“At first I didn’t think anything of it but then he was posting tweet after tweet about me, so I thought let’s see who this Archie boy is!”

Both undefeated fighters met each other for the first time at the show announcement in July which gave them both the opportunity to ‘discuss’ their differences face-to-face.

“I found it all very funny.” said Woodstock.

He continued: “I mean, I turned up with my title and he turned up wearing a man bag! Who even has those these days?!

“All of this is new to him. He made it obvious to everybody that he wasn’t really too sure what he was doing, bless his heart!”
Sharp’s first impressions not going down well with Woodstock, but the feelings appeared to be mutual;

“Blah-blah-blah!… I just let him talk because that’s what he likes to do.” Sharp replied with.

“For me, the fights made, my talking will be done in the ring.

“I personally believe the reason he talks so much and writes so much on twitter and social media is so he can serve some confidence to his self because that is what he needs.”

Archie Sharp’s amateur pedigree has been a factor he has made clear to Woodstock all throughout, something the Leicester man has mockingly played down in return.

“Lyon has to go on about my amateur career and it was this many years ago, but at the end of the day, I’m still sparring and mixing it with the likes of Luke Campbell, Joe Cordina; both top amateur fighters.

“I boxed at a great level, boxed opponents at a high level and ability wise that are a lot better than Lyon Woodstock, the only difference really is that this is a ten-round fight, but I train for twelve-round fights and on the 6th October I’m going to turn it up!”

Super-Featherweight Lyon Woodstock believes upcoming foe Archie Sharp will find out the hard way that he isn’t ready to challenge him for his WBO European title.

Leicester’s Woodstock (11-0) suggested that Archie Sharp (13-0) has taken desperate action to get a big, televised fight and should have taken an easier fight before challenging him.

“This is a big step up for Archibald.” said Woodstock; chuckling away at his decision to call him by his full name.

“but seriously, if I was…. Archie, I would have gone for someone on a level below me. He hasn’t done that and gone and jumped straight into the shark tank with a natural predator.

“He’s talked his way into this position and there is no turning back now for him.”

Both Woodstock (25) and Sharp (23) began their boxing careers in the professional ranks in the summer of 2015.

Woodstock has since gone on to win an area title and most recently the WBO European title in which was an entertaining scrap with southern area champion Craig Poxton in Leeds of October last year.

Both of Woodstock’s title triumphs took place on televised events which were broadcast live on BT Sport.

Sharp on the other hand has taken the route of progressing out of the spotlight and has racked up thirteen straight victories with seven coming by way of knockout on undercards and the small hall scene.

Woodstock will be the home fighter going into the fight as the belt holder, and the fight taking place in an arena just a fifteen-minute walk away from his house.

“He’s in a desperate position. He’s not entertaining, and his style isn’t as crisp as he seems to think it is. He’s a loose, open fighter and that just pay dividends to me” stated Woodstock.