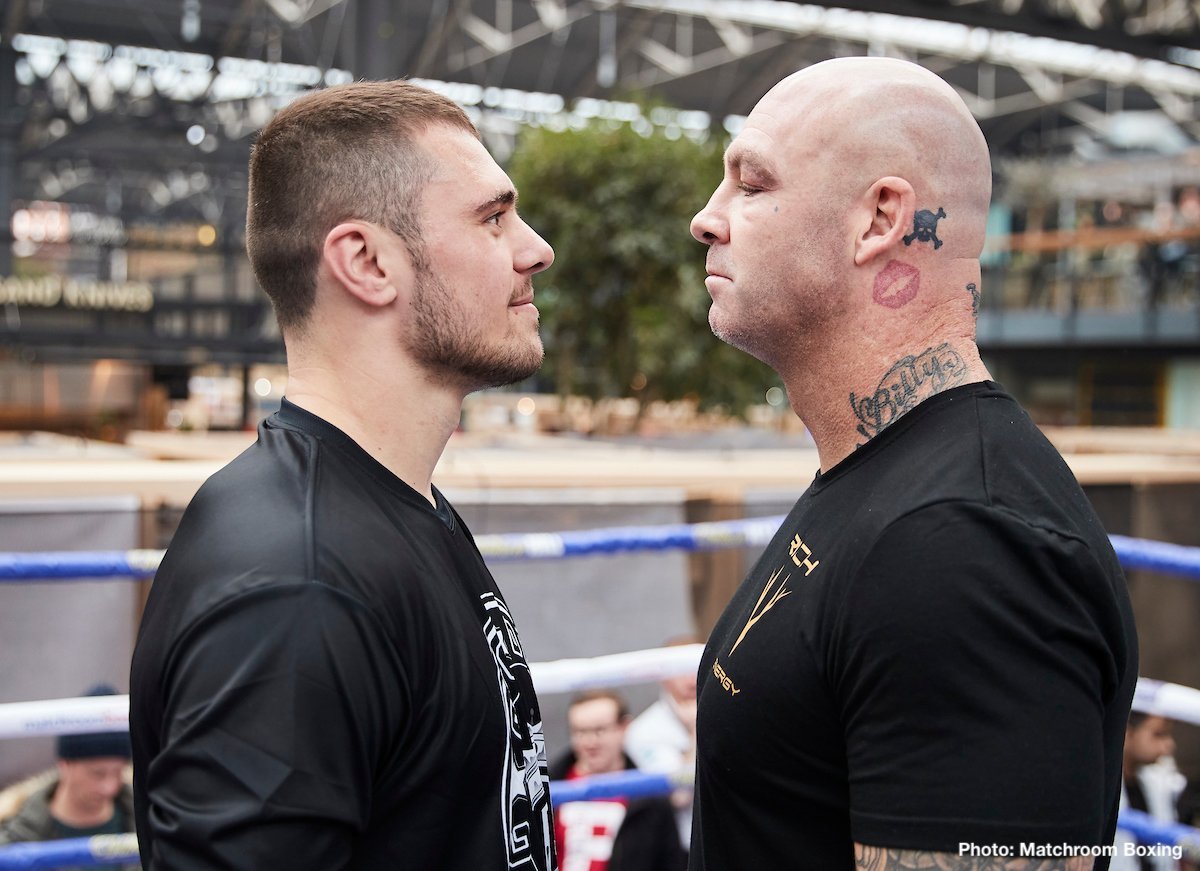 Dave Allen insists there is “zero chance” of Lucas Browne defeating him by knockout when they collide at the top of a huge Heavyweight bill at The O2 in London this Saturday, live on Sky Sports in the UK and DAZN in the US.

Former WBA World ruler Browne has amassed 24 stoppages from 28 career wins and the hard-hitting Australian known as ‘Big Daddy’ says he is looking forward to a “good old fashioned slugfest” when he meets cult hero Allen over 12 rounds in the Capital.

Allen is renowned for his durability having only been stopped twice in 22 fights – a seventh round TKO loss to World title challenger Luis Ortiz and a controversial tenth round stoppage loss Olympic gold medallist Tony Yoka – and the ‘White Rhino’ says he has no concerns over trading leather with Browne.

“The last thing I worry about when I box is the power,” said Allen. “That’s not because I can take a good shot, even though I can.

“People say ‘you haven’t got a good defence’, I’ve got a great defence, I see every shot coming. Even the ones I take clean in the face, I know they’re coming. You’re not going to knock me out.

“Lucas Browne, if he’s planning on beating me with power, he might as well stay in Australia, because there’s zero chance of me getting knocked out.”

Allen heads into the biggest fight of his career in the form of his life following three KO wins over Nick Webb, Samir Nebo and Ariel Esteban Bracamonte, and the popular 27-year-old Yorkshireman is aiming to make it three KO wins from three fights at the Greenwich venue.

“Even though there’s no animosity in the build-up, I want to punch him all over The O2. I’ve trained harder than ever for this fight and you’ll all see the difference come fight night. I’m going to knock him out.

“A win here puts me on the big stage, not the highest level, but within touching distance of a fight that would then put me there.”

Lucas Browne is expecting a bloody affair against Dave Allen

Aussie hardman Lucas Browne is expecting a bloody and bruising affair when he collides with Doncaster fan favourite Dave Allen at The O2 in London on April 20, shown live on Sky Sports in the UK and DAZN in the US.

The Heavyweight rivals came face-to-face for the first time at today’s Public Workout at Old Spitalfields Market and both men were in good spirits as they embraced and joked, but the former WBA Heavyweight World Champion insists it will be strictly business come fight night.

“This is the first time I’ve met Dave and I really like him,” said Browne. “I’ve never had a bad word to say about him and I still don’t. He’s a cool guy and you can see how popular he is from today’s turnout at the workout, there was hundreds of the people there. It is what it is. We’re both professional fighters and I’m just going to do my job on the night.

“I don’t think he’s ever going to be a World Champion but he’s definitely a great fighter. If you put him up against anyone else in Australia, I think he beats them. He’s got a chin like a brick so it’s going to be a long night for me. I’m not going to bowl him over in one round but I’m prepared for all scenarios. We’re going to knock lumps off each other.

“I think there’s going to be blood, some cuts and some big punches. The fans are going to be the real winners. I genuinely believe this has got the potential to be Fight of the Year if everything gels. He looks like he’s started to take things very seriously and you can tell that by the shape he’s in. I think you’ll see the best versions of us next week.”

Browne returns to the scene of his sole career loss to Dillian Whyte determined to redeem himself. Since that loss, ‘Big Daddy’ (28-1) has made changes to his training team and bounced back with three wins. He believes another victory on April 20 will fire his name back into the World mix.

“My mental state wasn’t right heading into the Dillian Whyte fight. Everything that I was doing at home with training and going away from the family and all that sort of stuff wasn’t right, so that did affect everything else as well. My head wasn’t right and I think that had a big impact on everything leading up to the fight.

“My boxing trainer Rodney Williams who came over with me last time, he’s an absolute legend of a bloke as well as a boxing trainer, but I wasn’t doing any of the strength and conditioning and all that other stuff. I think I was definitely lacking in that regard.

“Now I’m hooked up with Jay Gray my Head Coach. I’m in Perth with my kids and family and that’s a full time thing there. Jay does everything in the one gym so not only my boxing, sparring and pad work, but all of the strength and conditioning, fitness and everything all in one spot.

“I think it’s something that I needed to do instead of spending so much time away from my family. I’m in a really good place now and I feel happy. I think that’s going to make a big difference to my career moving forward. This is the start of my journey to another Heavyweight World title.”

Allen vs. Browne is part of a huge night of boxing in the Capital.

General Sale tickets for April 20 are available to purchase from StubHub (www.stubhub.co.uk), The O2 (www.theo2.co.uk) and Matchroom Boxing (www.matchroomboxing.com)